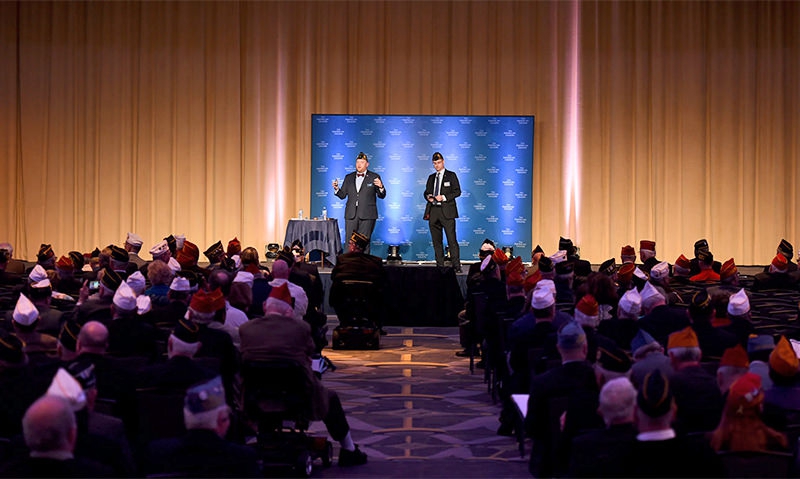 Those words accompanied many message points from American Legion Legislative Division Director Matthew Shuman and Assistant Director Jeff Steele as they briefed hundreds of veterans gathered in Washington, D.C., at the annual “Know Before You Go” review of legislative priorities. Legionnaires from across the country will personally deliver those priorities to their congressional representatives this week.

Priorities such as improved efforts to use VA services to prevent veteran suicide, provision of qualified VA medical staff to better serve the nation’s growing number of women veterans, the installation of a long-awaited DoD-VA electronic medical records system and the streamlining of nine different non-VA health-care programs into one that VA fully manages were among the issues Legionnaires will take to Capitol Hill.

“It just makes common sense when you (leave DoD) and become a veteran, you should have one medical record that follows you everywhere,” Shuman said, noting that progress is being made toward a fully interoperable electronic records system that can untangle information-sharing issues between VA and DoD for veteran patients. Shuman said the project needs to be funded, however, without the forfeiture of VA medical services.

The Choice Program, which allows veterans to use non-VA providers if they live far from VA services or near facilities that are overbooked, expires in May. That program, initiated in 2014 after veterans were found nationwide to be waiting for appointments that had not in fact been scheduled, allows VA-enrolled patients to use non-VA services from community providers, but only when necessary. “We are 100 percent opposed to privatization,” Shuman told the Legionnaires, warning them that some legislation now in Congress “calls for just that.”

The American Legion is taking to Congress conditional support for continuation of the Choice Program. National Commander Denise H. Rohan is scheduled to testify before a joint session of the House and Senate Committees on Veterans’ Affairs Wednesday to explain that The American Legion puts efficient and timely health care first for the nation’s veterans, and if achieving that goal means the use of non-VA providers, steps must be taken to ensure quality and fair, timely compensation for community providers.

“A community care option is now a basic expectation for enrollees in VA’s health-care system,” according to drop-sheets Legionnaires were given at the Monday briefing. However, “excessive outsourcing would render (the Veterans Health Administration) too small to function economically or preserve quality of care and essentially dismantle it. Congress should pass legislation to unify VA’s multiple non-VA care programs, with VA as the coordinator and guarantor of care.”

Among the issues on the Legion’s legislative agenda this week are:

• Expansion of support and benefits for the estimated 5.5 million Americans who are caregivers for disabled veterans of all war eras.

• Increased resources and assurance that the growing percentage of women veterans receives VA health care equal to that of their male counterparts, provided by physicians qualified to deliver gender-specific care.

• Measures to improve recruitment and retention of VA health-care providers, emphatically those who work in mental health.

• Oversight to ensure that a lifetime electronic health record system connecting DoD and VA is properly funded, effective and seamless no matter where a veteran might be seeking care.

• Mandate end-of-service physical examinations for all military personnel at separation, a requirement that is now only partially authorized for the reserve component.

• Continued support, emphasis and funding for effective programs that seek to reduce the veteran suicide rate. Shuman explained that veterans who use VA services are less likely than others to commit suicide.

• National security measures to improve cybersecurity, military quality of life and adequate funding and resources for the U.S. Armed Forces now at war.

• Support for H.J. Res. 61 and S.J. Res. 46, that would allow Congress to approve a constitutional amendment to prohibit the physical desecration of the U.S. flag. “At some point, this country will see the light (on the flag amendment),” Steele said. Until then, he added, flag protection will never leave The American Legion’s legislative priority list.

Legionnaires posting photos and messages about their visits on Capitol Hill this week and during the national commander’s testimony are encouraged to use the hashtag #LegionStormsHill on social media channels.