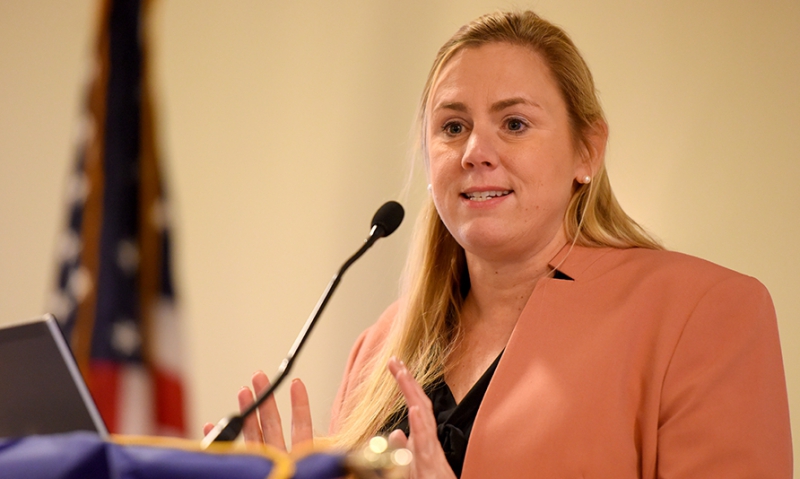 The Department of Veterans Affairs will also be ready to deal with those veterans on the verge of committing suicide – at a rate of 20 per day – its acting director told The American Legion’s Veterans Affairs & Rehabilitation Commission on Feb. 26.

But during the Legion’s annual Washington Conference, Keita Franklin stated a loftier goal: to have VA catch thoughts of suicide earlier than that point.

“Where we really need to go, I think, if we we're really getting after this in a solid way, is we would … upstream,” Franklin said. “We will always handle crisis. But we’re always handling crisis, we’re always going to be handling crisis. We have to get to a place where we’re identifying risks like in the military side; they call it ‘left of boom.’ We have to move left of crisis. It could be divorce. It could be bankruptcy. Anything could be the boom. But we want to move way left of that.”

Moving in that direction, Franklin said, would require having “suicide-prevention capabilities for everyone. We would target all veterans with some messaging. Everyone. And then we would know who was at risk at the group level, and we would have targeted interventions for at-risk groups.”

Franklin said data shows veterans taking their lives during various stages of their transition to the civilian world, from as early as Day 3 to much later in the transition. “As we learn more about these populations that are at risk, the idea is that we can dig deep and offer care or interventions around this period,” she said. “Know that the first 12 months is a period of risk that we need to do more about.”

Veterans considering taking their own lives are not beyond help, Franklin said. “I want you to know that, front and center, it’s preventable,” she said. “This seems like a simple topic, but believe it or not when I travel around and talk about suicide people will ask me that: ‘Is it really preventable?’ Do we believe it in our heart and the fabric of who we are? Yes. There are things we can do to prevent suicide.”

Of the 20 veterans taking their lives daily, Franklin said 14 have never used the VA health-care system. “So if I had the best strategy … we would chase down the six,” she said. “We know them. They touch our system.

“The 14? We would need The American Legion. We would need other organizations to come to bear, local libraries, local YMCAs, local friends, parents. It would be easier if it were just those in our health care. But it’s much broader than that.”

Randy Reeves, under secretary for VA’s Memorial Affairs, said his agency currently is providing dignified burial options within 75 miles for 92 percent of veterans and their families and are on track for 95 percent.

“But the thing I want to work on the most is making sure that we reach beyond that, to what I call the hardest 5 percent,” he said. “My goal is to make sure there is dignified burial option or an opportunity for all of our veterans and their families across the nation.”

Reeves also discussed the National Cemetery Administration’s Veterans Legacy Program, which is designed to allow citizens of all ages to learn about U.S. history, visit national cemeteries or experience them online, and get to know those places as engaging places for learning.

“It’s said that every person dies two deaths,” Reeves said. “The first is when breath leaves you for the very last time. And sometime later you truly die when no one ever speaks your name or tells your story again. I’m putting all the effort that I’ve got for as long as I am in this job – just as my staff is and many others at VA – to make sure we do everything that we can to truly memorialize our veterans. To tell their stories. To make sure that they never die.”