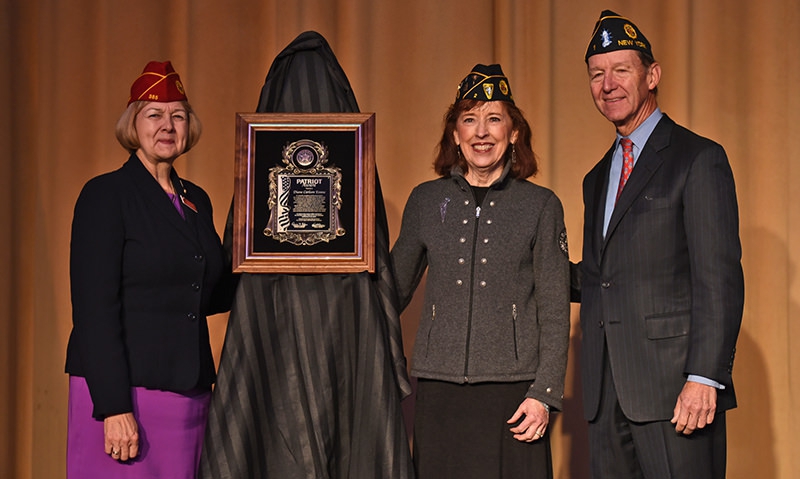 Diane Carlson Evans was a graduating high school senior in 1964 when The American Legion first officially recognized her. Her local post in Buffalo, Minn., presented her with its annual citizenship award. On Tuesday, during the organization's 58th Washington Conference, she was officially recognized once again, this time with The American Legion's prestigious Patriot Award, for the many ways in which she has fulfilled the spirit behind that high school award over the last 53 years.

"I don't think I clearly understood it then, but it is clear to me now, how much gestures like that mean to young people; in my case, I studied to become a nurse," said Carlson Evans, a U.S. Army veteran who came home from the Vietnam War, continued to serve as a nurse in stateside military medical facilities and later led a complicated 10-year effort to build the Vietnam Women's Memorial on the National Mall in Washington, D.C. "I enlisted in the Army and trained to save lives because I wanted to go to the Vietnam War and do just that. As a citizen of this nation, I felt it was my duty. And I spent every day in-country trying my best to save as many as I could. That experience shaped the rest of my life, and it continues to do so today."

A leading national voice for women veterans and a member of The American Legion's 100th Anniversary Honorary Committee, "Diane Carlson Evans is, first and foremost, a wartime veteran,” American Legion National Commander Denise H. Rohan said before presenting the award. “She volunteered to serve deep in the combat theater of Vietnam. She put her life on the line – often in terrible conditions and under deadly enemy fire – to save others. When others in our country were looking for ways to get out of the war, she was asking for ways to get into it.”

In the early 1980s, Carlson Evans introduced a resolution at her local American Legion post in River Falls, Wis., and shepherded the idea of a women’s memorial on the National Mall through The American Legion’s Department of Wisconsin and on to the organization’s National Executive Committee, whose resolution helped fuel the effort nationally.

“My vision needed a champion,” Carlson Evans, now of Helena, Mont., told hundreds of American Legion Family members gathered Tuesday for the conference. “I knew I couldn’t do this alone. The American Legion never hesitated.”

“It is wholly within her character … how she single-handedly led a difficult movement that continues today to honor the wartime service of women in the military, to reverse stereotypes and inspire future generations,” American Legion 100th Anniversary Honorary Committee Chairman Ted Roosevelt IV said at the award presentation. “Diane Carlson Evans, I salute you.”

“I want you to know, and hope you know, how much your investment has ensured the legacy of women veterans, particularly of the Vietnam War, how much it has contributed to our personal healing, and that it leaves a shining beacon for future generations of American women,” Carlson Evans told the crowd. “I humbly accept your Patriot Award – on behalf of the women veterans I sought to honor and on behalf of all those on a team – that’s you – who made this dream come true.”

Rohan and Roosevelt both reflected on The American Legion's legacy of support for women veterans, dating back to the organization's founding in 1919.

"From day one, men and women alike have been eligible for American Legion membership – and leadership," Rohan said, adding that "more than a year would pass after the Legion’s formation (in 1919) for women to be granted full voting rights in America. The American Legion’s founders made clear from day one that a veteran is a veteran, enlisted or officer, regardless of ethnicity, branch of service or duty station… male or female."

Roosevelt IV, grandson of American Legion founder Theodore Roosevelt Jr., agreed that Carlson Evans illustrates the Legion's formative principles. "I believe that somewhere in the long-range vision of the founders, veterans like Diane Carlson Evans can be found," he said.

Engraved on the 2018 Patriot Award are the words:

"For honorable, courageous and life-saving service to your country as a U.S. Army combat nurse in the Vietnam War; as a national leader and respected voice for women veterans of all service branches, specialties and duty assignments; as the indefatigable force behind a complex approval process to install the Vietnam Women’s Memorial on the National Mall in Washington, D.C.; and for your enthusiasm and participation as a member of The American Legion’s 100th Anniversary Honorary Committee; you have demonstrated above and beyond the call of duty what it means to be a patriot."

Carlson Evans was profiled in the September and October 2017 issues of The American Legion Magazine. To see that article and a video about her time at war and after, visit the Legion's website here.