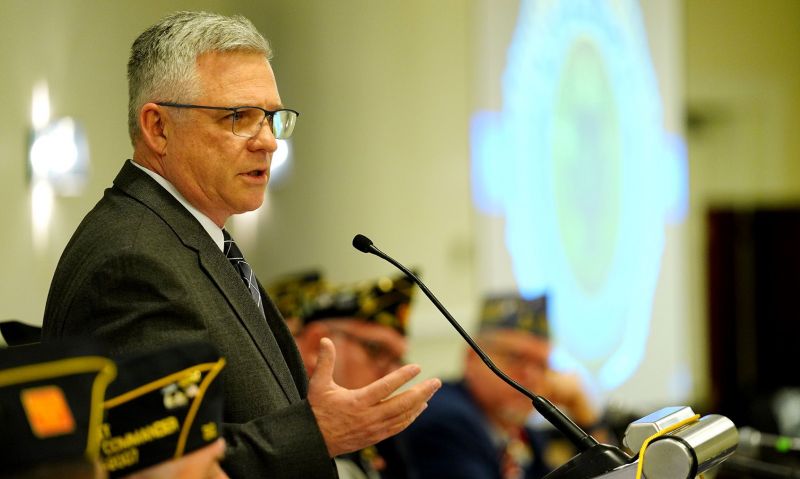 Talk of the possible privatization of the Department of Veterans Affairs is a hot topic in the veterans community. But as far as Dr. Richard Stone – VA’s Executive in Charge of the Veterans Health Administration – is concerned, the department’s recent efforts are counter to any efforts at privatizing the health-care system.

Stone said that although VA is working to provide veterans with more care choices, “We are not moving money to dissemble our health-care system. We are not privatizing,” Stone told The American Legion’s Veterans Affairs & Rehabilitation Commission on Feb. 25 during the organization’s Washington Conference. “We believe the future of the VA health-care system should be in the hands of veterans, and you should decide what we have.

“The accusation that we are privatizing – if I was privatizing, why would we be spending over $10 billion to put into electronic medical records? Why would we be hiring more than 11,000 more employees than we had a year ago at this time? Why would we be working so hard to ensure your trust? If this is a model of privatization, we’re doing a pretty bad job of it. We think the future of this health-care system is strong, and is a model for all of American health care for access in most places.”

Stone said that VA also has focused on quality of care and restoring trust among its patients. “What you deserve in a health-care system as veterans is a health-care system that is reliable in the way it operates,” he said. “We have, therefore, just last week begun to roll out in the first 18 hospitals what we call our ‘Movement to Zero Harm.’ Humans make mistakes. Humans make errors. But they shouldn’t cause harm to patients. What we’re moving toward is a system in which we can really move to zero harm.”

On the subject of veterans using the Choice program to seek health care outside VA, Stone said the numbers are both low and telling. “Anybody more than 40 miles away (from a VA facility), you could go out into the community,” he said. “Nine out of 10 (veterans) did not go out. Of the 1 in 10 who went out, 90 percent of those … went out for one visit and then came back to us.”

With the 75th anniversary of the GI Bill coming up, VA Under Secretary for Benefits Dr. Paul Lawrence urged veterans who have used the American Legion-authored legislation to share their success stories via one- to two-minute videos that VA will share later this year. Lawrence also shared information on new programs made possible by the current version of the GI Bill, the Harry W. Colmery Veterans Educational Assistance Act:

• The Veteran Employment Through Technology Education Courses (VET TEC), which is designed to give veterans an edge in the high-tech job market, and

• Additional benefits for STEM education, including up to nine extra months of benefits (not to exceed $30,000) for veterans who meet the criteria.

“The GI Bills continue to become a wonderful program,” Lawrence said. “This works, and tens of millions of people have taken advantage of it."

On the subject of legislation that would provide disability benefits to those Blue Water Navy veterans who claim to have suffered toxic exposure to Agent Orange during their service in the Vietnam War, Lawrence said a divide remains. In January, the U.S. Court of Appeals for the Federal Circuit ruled in favor of Alfred Procopio Jr., who served aboard USS Intrepid during the war. Procopio, 73, suffers from diabetes and prostate cancer, both of which are linked to Agent Orange exposure.

“VA’s in the process of reviewing this decision and figuring out the response. That’s all I can really say,” Lawrence said. “The science isn’t there, from our position. I know we disagree on that, and that’s unfortunate. But one day, whatever happens, we won’t disagree, and we’ll be on the same side. When that happens, it will be our intention to execute whatever that results in as efficiently and as effectively as we can for veterans.”

Lawrence agreed. “I understand that this is a legislative issue, and I certainly never want to give advice to congressional oversight people,” he said. “Having said that, I am an economist, and I do think about money things all the time. I’ll make the following observation: pension is deferred compensation. Payments for disability are the payments your country committed for the economic impairment you suffered under your time in the military. Those are two different things. That would be my statement.”

Randy Reeves, VA’s Under Secretary for Memorial Affairs, praised The American Legion for its efforts in providing honor guard and funeral escorts via the Legion Riders for deceased veterans.

“If it were not for The American Legion and many of our other service organizations, our veterans would not receive the honors they have earned and they deserve,” Reeves said. “Please give yourself a hand for that.”