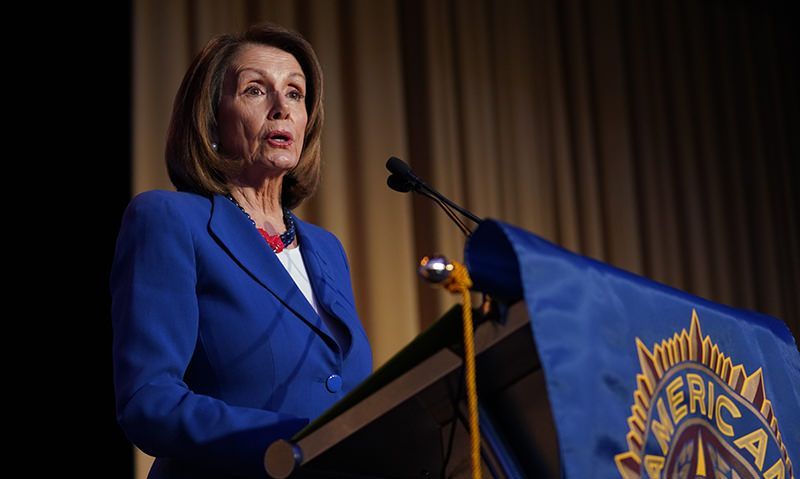 Opposition to privatization of the Department of Veterans Affairs was made clear by House Speaker Rep. Nancy Pelosi during her address to Legionnaires at the organization’s Washington Conference Commander’s Call on Feb. 26. That includes weighing any proposed legislation or policies carefully to ensure they benefit the mission of the health-care system serving the nation’s veterans.

“We must fight privatization,” Pelosi told members of The American Legion. “Sometimes they come in disguise, but we all have to recognize the ramification of any proposal. Give it its fair shot. Is it in furtherance or strengthening our ability to honor our responsibilities to our veterans?”

Pelosi said that support for veterans “is bipartisan, and we strive to make it so. Listening to you and what your priorities are, how we can go forward in a positive way. This Congress, on a bipartisan basis, is honored to fight for veterans, and defend your health care and benefits, as well as the readiness of our men and women in uniform. Just as the military leaves no soldier on the battlefield behind, when you come home leave no veteran behind. That is our pledge.”

Switching comments to the original GI Bill – “the bill was passed because of the initiatives of The American Legion,” she said – Pelosi thanks The American Legion for its advocacy and foresight nearly 75 years ago. “It assured the right of every veteran to pursue a quality, affordable education that puts them on the path to good pay and meaningful jobs,” she said.

Different versions of the legislation have passed through the years, the most recent the Harry W. Colmery Educational Assistance Act that went into effect last August. “We were proud to formally name the ‘Forever GI Bill’ after former Legion National Commander Harry Colmery,” Pelosi said. “It was a recognition that we all know, but we wanted everybody to know who hand-wrote the original GI Bill.”

Pelosi also congratulated The American Legion for turning 100 years old, which it will do in March.

It’s an honor to join the men and women of The American Legion as we mark 100 years of your strong, effective advocacy and action. The American Legion has always paved the way forward. Since your founding after World War I, generations of veterans have looked after each other in an unbreakable chain of support: Veterans of every war lifting up and fighting for veterans of the next (war).”

She also asked The American Legion to continue to work with Congress on behalf of the nation’s veterans. “Congress cannot do our inside maneuvering without your outside mobilization,” Pelosi said. “We need you to join the fight, as you have … to raise your voices, to defend your rights and advocate for your needs.”