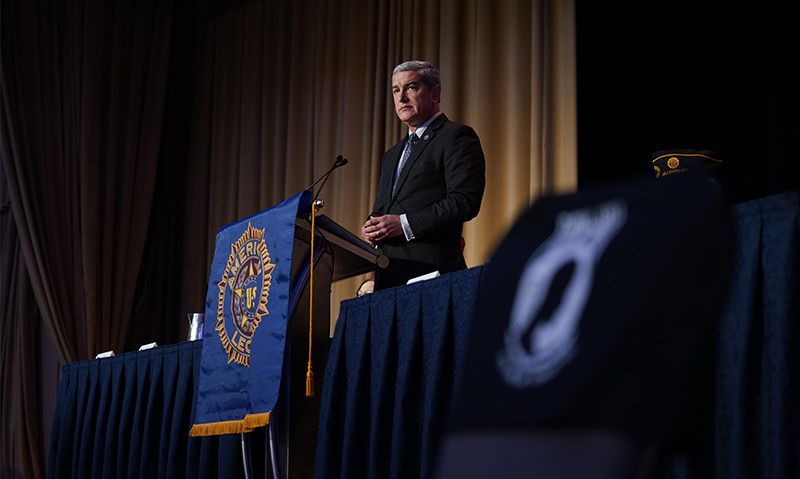 During his address on the stage at the Feb. 26 Washington Conference’s Commander’s Call, Defense POW/MIA Accounting Agency (DPAA) Director Kelly McKeague presented American Legion National Commander Brett Reistad with a flag that had been draped over one of the 55 transfer cases of U.S. servicemembers’ remains returned to the United States from North Korea last August.

McKeague’s explanation as to why he was giving the flag to Reistad and The American Legion spoke to the organization’s dedication to provide for a full accounting of U.S. military classified as missing in action or prisoners of war.

“This was the first time that North Koreans had turned over remains in 13 years,” McKeague said. “You are part of this. Your advocacy. Your raising awareness resulted in this happening.

“You continue to champion this noble cause in the halls of Congress and throughout the communities of this great nation. To not only raise the awareness level of our American leaders and Americans of all stripes, but more importantly to engender their support.”

“While the numbers are daunting, they’re so much more than just figures,” McKeague said. “Stories are attached to every one of these 82,128 who are missing. It transcends time, and it is a loss that leaves an enduring void in both heart and mind of the families.

“I never realized it until I met the first MIA family. They are no different than Gold Star families who may have lost a loved one in Afghanistan last month. What makes them different is the fact that there’s an uncertainty attached to their loss. And it’s that uncertainty that gnaws at the heart and creates that void for them (for) generations to come.”

McKeague provided Legionnaires with a series of successes his agency has had in identifying and bringing home remains. He also provided several developments he said he was proud of, including:

• Vietnam and Laos are cooperating with improved effectiveness and efficiencies; and

• The agency is expanding public-private partnerships worldwide for research and field work.

“I share this with you because you, The American Legion, have been a part of these successes,” McKeague said. “Congress has been particularly bipartisan and very supportive of the POW-MIA mission. We believe that bipartisan support is due to your efforts – to not only raise awareness, but also, more importantly, to advocate on behalf of our unreturned veterans and their families.”

McKeague said his agency also is working with its Russian counterpart “separate and distinct from the denuclearization talks. We believe that (during President Donald Trump’s Feb. 27 summit with North Korea Prime Minister Kim Jong Un) this issue will be raised by our president, just as he did in Singapore. And we’re hopeful that we will be able to negotiate with North Koreans to resume field operations inside North Korea this summer, which we have done since 2005.”