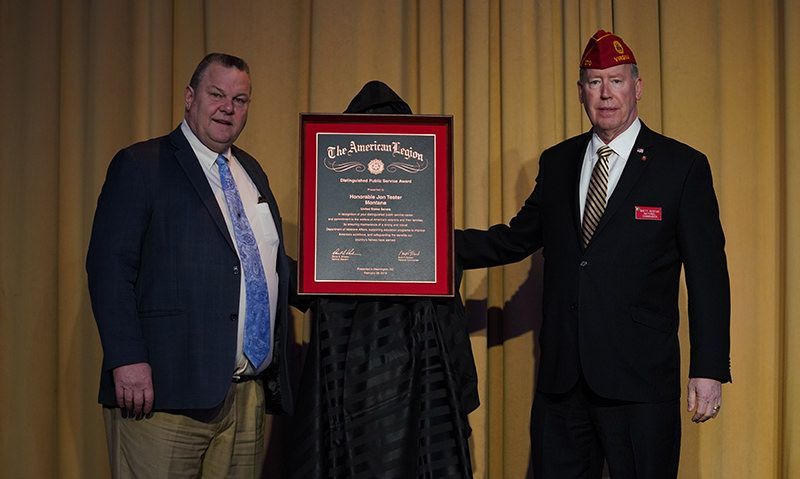 Department of Veterans Affairs-provided statistics show that of the 20 veterans that commit suicide each day, 14 are not connected with the VA. Sen. Jon Tester, the Ranking Member of the Senate Committee on Veterans' Affairs, is asking The American Legion to help make sure those veterans not using VA still know someone is out there for them.

“As I go around the state of Montana, I hear from a lot of veterans. But there’s a lot of veterans I don’t hear from,” Tester told Legionnaires in Washington, D.C., during the organization’s Washington Conference Commander’s Call. “The folks maybe from the Vietnam era that came home and literally went into the woods. The folks from the conflicts over the last 20 years that have come home and just want to get away from it all.

“That is where you come in. That’s where The American Legion comes in. Your outreach to those folks that are out there that need help – and in some cases don’t know that help is available – is critically important. And it’s also critically important for your voice, when you come back (to Washington, D.C.), to make sure those unheard voices are also heard.”

Tester was presented The American Legion’s Distinguished Public Service Award following his comments to the hundreds of Legionnaires attending the session. American Legion National Commander Brett Reistad praised Tester for being “supportive of efforts to provide quality health care for veterans, regardless of where they live. Sen. Tester cares about veterans, and has exhibited this by his hard work on behalf of all of us.”

Tester said the reason for recent legislative successes on behalf of veterans came because of bipartisanship. “We did have a very successful (115th Congress),” he said. “The American Legion and others spoke loudly, and we heard you, and we were able to get things done. The reason we got things done is because I’ve got an incredible partner on the Veterans’ Affairs Committee by the name of (Sen.) Johnny Isakson. There is an incredible of respect and trust between myself and the chairman of the Veterans’ Affairs Committee.”

Tester said he urges other veterans to get involved in advocacy efforts through one simple step. “I tell them ‘join The American Legion. Join a (veterans service organization). Get involved, because those folks are back here fighting for you every day.’”