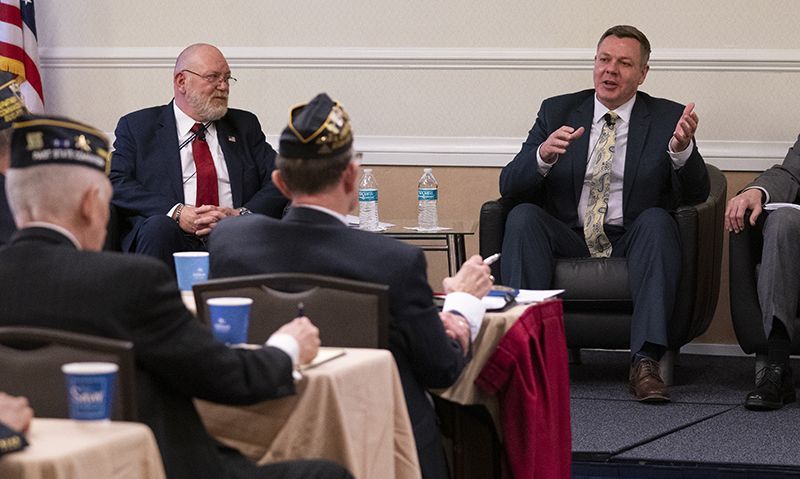 Mike Miller of the Department of Defense speaks during a panel in the Veterans Employment & Education Commission meeting at Washington Conference in Washington, D.C., on Monday, March 9. Photo by Ben Mikesell/The American Legion

A successful transition from the military to civilian life is important for servicemembers and their families, and the Department of Defense is constantly seeking improvement in the Transition Assistance Program (TAP).

“TAP is that foundation that allows folks to have the information they need to go out and learn from the ecosystem, all that surrounds (them) beyond TAP,” said Mike Miller, of DoD’s Defense Personnel and Family Support Center, during a panel discussion about TAP before The American Legion Veterans Employment and Education Commission on March 9 at the Washington Conference.

It’s also important to get feedback on the progress from partners, and from veterans service organizations like the Legion, Miller said.

“We can build a perfect mousetrap in D.C., but if it’s not catching mice out where you live in your community, it’s not really working very well,” Miller said. “…We’ll need your help in evaluating those folks that go through that and get out, so we can build an even better mousetrap next year.”

Miller noted that changes to TAP, which went into effect last November, are designed to be “a carrot on the front side” rather than a stick on the back side.

“No later than 365 days out (from transition) … you’ve got to sit down with a counselor and you’ve got to go through a personal career exploration discussion to determine where you’re at and where you’re headed,” Miller said. Previously, TAP assistance took place closer to the servicemember’s departure from the military.

The Department of Veterans Affairs is also part of TAP, introducing servicemembers how to connect to the VA. “It’s an overview of benefits and services offered by the VA, so you can start thinking about and planning together as a family,” said Nathan Williamson, deputy director of the VA’s Office of Transition and Economic Development.

Tim Winters, director of transition assistance programs at the Department of Labor, pointed out the importance solid employment can play for transitioning servicemembers.

“Sound employment is one of those things, if you don’t have it, it exacerbates all these other problems that can come up, and it can contribute to many of those problems as well,” Winters said, such as homelessness and mental and physical health issues. “So if a person has made a good employment transition, that takes a lot of weight off all these other issues.”

Speaking after the TAP panel, John Lowry, assistant secretary of veterans employment and training services at the Department of Labor, said simply getting a veteran into a job isn’t enough.

Also at Monday’s meeting, the commission received an update on the Millennium Cohort Study, a long-term, large-scale study of military personnel and veterans aimed at examining the effects of military service. The study began in 2001, with new cohorts added in 2004, 2007, and 2011.

Dr. Rudy Rull, principal investigator of the Millennium Cohort Study, shared some of the key findings, including health issues such as obesity and back pain. He also noted the Millennium Cohort Family Study, which launched in 2011 to study issues in family members of military personnel and veterans.

The afternoon session of the commission meeting also included breakout panels on education and training in the private sector, and advocating for homeless and incarcerated veterans.