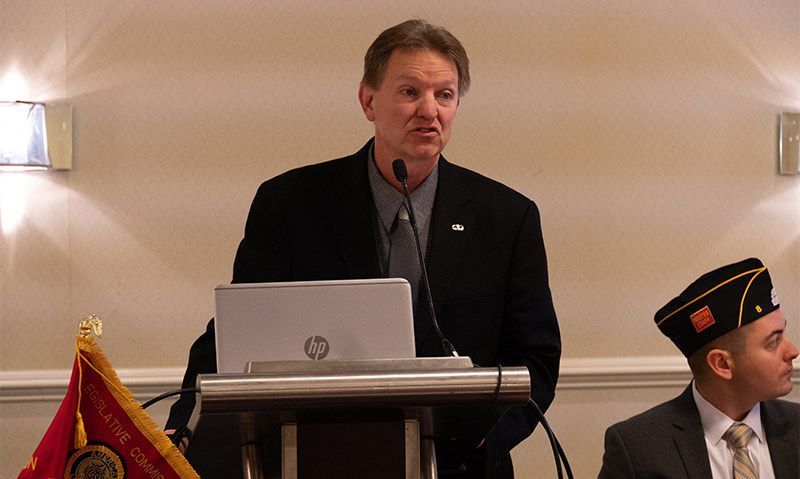 On the eve of The American Legion’s largest annual advocacy push on Capitol Hill, the National Legislative Commission learned about this year’s priorities and last session’s successes.

Legislative Commission Chairman Vincent Troiola of New York underscored the importance of the committee’s work and how it translates to successes on Capitol Hill, which in turn, helps millions of the nation’s veterans.

“The importance of this commission and its mandate is we are solely responsible for representing The American Legion before the United States Congress and each committee thereof on all legislative matters that The American Legion is interested and eager to assist the National Executive Committee in formulating an appropriate legislative program for each session of Congress,” Troiola told the commission during its meeting at the 60th annual American Legion Washington Conference on March 9. “The importance of this mission is not lost on me and it should not be lost on you either. We should remember that what we do here and how we conduct ourselves impacts all of our nearly 2 million members.”

It’s important to continue the advocacy message even after the conference concludes this week, Troiola said. “The stances and positions we take from here to share with other Legion members and our Legion Family shape the values of this organization going forward.”

During this session of Congress, The American Legion will encourage passage of legislation that will help veterans, servicemembers and their families. The Legion’s priorities are included in this new brochure.

“I feel like I am preaching to the choir here because part of the message that I have been spreading as national commander is to get active, stay active and be active in your legislative affairs,” Oxford said. “The value of our legislative efforts is among the biggest and important things that we do.”

That can be seen in the progress made by The American Legion last year. Among the highlights of the 2019 legislative year:

• The passage of the LEGION Act, which narrowed the number of recognized war eras from seven to two. This honors the service of all veterans who served since Dec. 7, 1941, especially the approximately 1,600 veterans killed or wounded during previously undeclared war eras.

• The expansion of Agent Orange benefits.

• House passage of the Deborah Sampson Act, which would enhance health benefits for women veterans. (The legislation still needs to be rectified with the Senate bill.)

Congress has authorized Stars and Stripes to operate independently so that “servicemembers, family members and other members of the military community have news and information that is credible, reliable and independent,” said Lederer, an Army veteran who served during Operation Desert Storm and is a member of American Legion National Press Club Post 20 in Washington, D.C. “It’s an important mission. I believe that we serve better, as members of the military community, if we can provide reliable information about what is going on. We want to know what’s on our left flank and our right flank.”

Lederer also talked about the role of gatekeeper for Stars and Stripes. “We also want to know when there is a mistake, there is accountability for that mistake,” he said. “We want to know if the VA hospital is not properly treating the patients who go there. That’s part of our role.”

Stars and Stripes is limited in the funding it can produce since some of its audience is often on deployment. That’s why, Lederer said, Congress decided it was worth funding Stars and Stripes.

The $15 million that DoD wants to eliminate is a small part of the department’s $705 billion budget. Lederer pointed out last week Stars and Stripes published a story about $45 million in payments that DoD overpaid to vendors.

“It’s not a large amount of investment needed to reach 1.4 million people on any given day, keeping them sustained, keeping their families healthy and helping them perform their service,” he noted.

The American Legion solidified its century-old relationship with Stars and Stripes with a new agreement just last year.