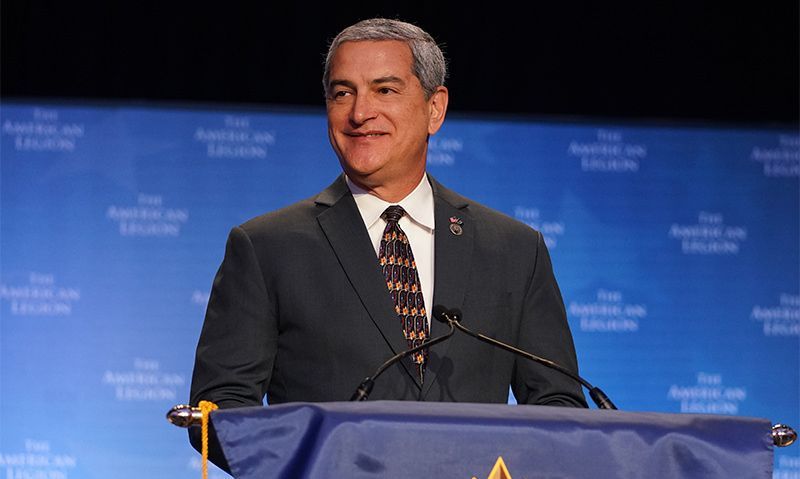 Marla Andrews was 2 years old when her father, a Tuskegee Airman, was shot down and killed in the European Theater of World War II. Last year, thanks to collaborations with two universities, advanced genetic science and determination from the Defense POW/MIA Accounting Agency (DPAA), she was able to wear his wedding ring after he was brought home and laid to rest at Arlington National Cemetery.

Capt. Lawrence Dickson of Bronx, N.Y., was just 24 years old when he went missing. “(He) was found and identified a year and a half ago on the border of Austria and Italy,” DPAA Director Kelly McKeague explained to hundreds of veterans gathered Tuesday for the 60th American Legion Washington Conference. “He was flying a P51 Mustang when he went missing.”

McKeague explained that a team from the University of New Orleans and the University of Innsbruck worked together to make the discovery, one example of many such effective collaborations between universities, foreign nations and the DPAA to repatriate America’s missing.

“In addition to finding his remains, they found his wedding ring, and they found his harmonica,” McKeague told Legionnaires as they prepared to meet with their congressional representatives on Capitol Hill. “Marla Andrews proudly wears her dad’s wedding ring. She was 2 years old when her dad went missing. She wears that ring on a chain around her neck.”

McKeague recognized The American Legion’s unwavering support for DPAA and repatriation of the fallen, from fighting for effective federal budgets to fulfill the mission, to participation in family-member update sessions to American Legion Rider escorts when long-missing loved ones finally come home.

“This is a sacred obligation and a moral imperative – to search for, find and recover, and identify missing Americans who have made the ultimate sacrifice,” McKeague said. “It’s the difference between a contract and a covenant. When your comrades entered the military, they signed a contract. When our nation sent them off to war, we entered into a covenant. You can break a contract if both parties, or one party, agrees to it. Our covenant is a perpetual pledge. You sign a contract. You seal a covenant.”

Today, McKeague explained, 146 military and civilian professionals are deployed in nine different countries to find the remains of missing Americans. “Think of them as unreturned veterans, who never had the chance to come back,” he said. “Wherever Americans made the supreme sacrifice and spilled their blood in battle, and their remains were never brought home, is where we send teams.”

The majority of today’s work, he said, is conducted in Vietnam. Access to sites in North Korea, he added, has been promised in recent years but has not materialized. He said that of the 7,600 Americans missing from the Korean War, about 5,300 are north of the DMZ.

In 2018, North Korea sent 55 boxes of U.S. military remains to the United States, boxes McKeague said “contained the remains of 250 different individuals. We were shocked. None of the 55 boxes had a full skeleton. These were disparate bones – leg bone, an arm bone, skull. We were shocked that there were so many in those boxes. Of the 250, 170 were of western origins. Only 20 of those had been previously turned over and previously identified. That means 150 new servicemembers will be identified over the next several months. Already, 44 of them have been returned to their families.”

Renewed hope for increased access to North Korean locations, or possible assistance from the North Korean Army, has stalled over the last year, McKeague said. “The last time we were there was in 2005. We have had three face-to-face meetings with the North Korean Army. Unfortunately, the last communication was in March of 2019 – over a year ago. We look at this as a humanitarian mission, one that they need to help fulfill.”

Much greater cooperation has come from Vietnam, which McKeague said has doubled the number of unilateral teams sent out to find missing American remains.

He added that “we continue to expand our footprint when it comes to World War II. As we do the research, we learn about losses and where they are.” He said the DPAA is now working on agreements with Indonesia and Malaysia “… to find missing Americans.” More than 70,000 remain unaccounted for from World War II.

McKeague said the DPAA is working to put aside diplomatic tensions with China and Russia to work on discovery and repatriation missions there. Efforts in China, he said, may be delayed by the coronavirus outbreak.

“Coronavirus is impacting us a great deal,” McKeague said. “We have had to cancel a mission in Laos. We had to postpone a mission in Italy. We had a scientific summit (in which) we were bringing 10 countries to Honolulu, and we had to postpone that. So, corona is having its impact, one we hope will not be long-lasting.”

The DPAA, he explained, is benefiting from 77 different working relationships with universities and non-government organizations, reducing overall cost of the recovery efforts. “That’s something we are very excited about. These universities and countries want to help us. So, we put them in the game.”

McKeague said The American Legion is a highly valued ally in the DPAA mission. “No. 1, your Legion Riders are there in force every time an American comes home. They represent that community connection to that loved one, to that servicemember, and that family is embraced by the Legion Riders. That’s important.”

He said the Legion’s influence has also been vital to the DPAA budget. “(Congress) heard loud and clear from you and other Legionnaires and Auxiliary members how important this mission is,” McKeague said. “We as a nation have that sacred promise, that pledge, that covenant, to move mountains to bring them home.

“This mission defines us as a nation. It represents the values that we, as Americans, lift up, values that we espouse and, more importantly, values we practice. Thank you to the Legion for fulfilling this covenant made with your comrades, a covenant that we as a nation owe. We sealed it when we sent them off to war. We have an obligation – because they never came back from war – to fulfill.”