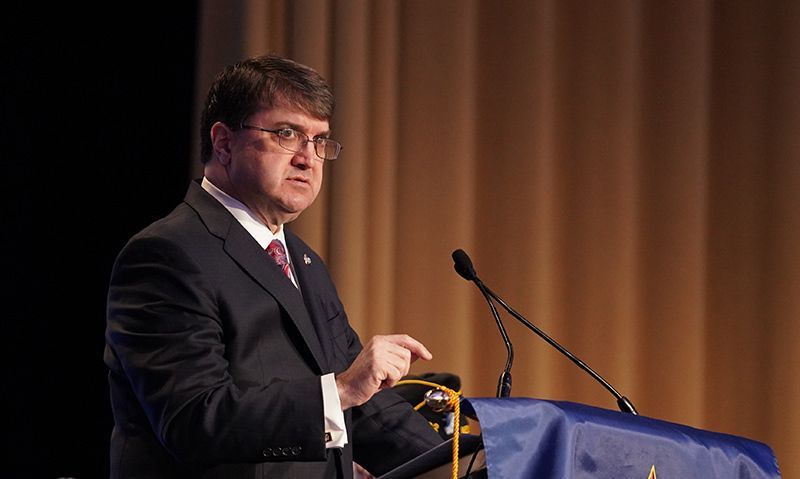 Department of Veterans Affairs Secretary Robert Wilkie told hundreds of veterans Tuesday in Washington, D.C., that steps are now being taken to protect residents at VA’s 134 assisted living centers from exposure to the coronavirus.

“We will be going into an emergency situation where we will limit visitors coming to the nursing facilities so we can protect those who are in those facilities, most of whom are over the age of 80,” Wilkie told attendees of the 60th American Legion Washington Conference. “As with everything else the Armed Forces of the United States does, we will get over this, and we will make sure everything is done to protect those who have done so much for our country.”

Wilkie, a member of the president’s coronavirus task force, added that other advanced precautions are being taken at all VA health-care facilities. “At all of our VA facilities now, we stop people before they go in. We are making sure that those who come to us are screened. We ask questions. We take temperatures.”

The secretary’s message about VA’s response to the outbreak comes “in the middle of the most transformative period of (VA) reform since Omar Bradley stood in the spot I now occupy (after World War II). The state of your VA is good. We are not rocked by systemic scandal. Wait times are as good or better than any in the private sector.”

He said VA fulfilled a record-high 60 million appointments in 2019, up by 2 million from the previous year. “Veterans are voting with their feet,” he told Legionnaires from across the country as they prepared to visit their congressional delegations on Capitol Hill in advance of American Legion National Commander James W. “Bill” Oxford’s testimony Wednesday before a joint session of the House and Senate Veterans’ Affairs Committees. That testimony is live-streamed on the House Committee on Veterans’ Affairs website at 10 a.m. Eastern Time.

Wilkie addressed several key issues on the Legion’s legislative agenda for the second session of the 116th Congress.

Among them is expansion of benefits for caregivers of veterans with service-connected disabilities suffered prior to Sept. 11, 2001. “For me, the son of a highly decorated and gravely wounded combat soldier of Vietnam, the most important part of the MISSION Act was to finally close one of those last loops left over from that fight in Southeast Asia. We have finally published the regulations that give financial and material support to the families of our Vietnam warriors who take care of those warriors, and it is long past time.”

The proposed rule change is up for public comment and can be seen on the Federal Register website.

Wilkie also mentioned that some 70,000 Vietnam War Blue Water Navy veterans are expected to apply for and receive VA disability benefits related to Agent Orange exposure while serving offshore, another issue, he said, that is “long overdue.”

Over a century overdue, he added, is a “national conversation” on mental health among veterans at risk for suicide. “Suicide is not a new issue,” Wilkie said. “The Army started taking statistics on this in 1892. It has been steady since then, but no one has bothered to have a national conversation on the toll that battle takes on those who come home. Every day, 20 warriors take their lives, the majority still from the Vietnam era. Sixty percent of those who take their lives, we don’t see.”

VA has spoken to The American Legion often in recent years about how the organization’s members can help reduce the suicide rate by identifying at-risk veterans and getting them into VA care. The centerpiece of the effort is the forthcoming PREVENTS (President's Roadmap to Empower Veterans and End a National Tragedy of Suicide) program that focuses on local intervention and participation by veterans groups like The American Legion. “When the PREVENTS Task Force issues its report, it will open the aperture of how we get resources to groups like the Legion, to Catholic Charities, to states and localities so they can help us find those veterans we can’t see – and bring them home to VA. But if we just look at that last tragic act of a veteran’s life, we will be doing a great injustice if we do not speak to mental health. We have not had a national conversation about mental health.

One other topic that has had a place on the Legion’s legislative priority list for many years is the need for an electronic health records system that follows a servicemember from enlistment through the end of life. That program is set to pilot in Spokane, Wash., and Seattle in the coming months, Wilkie said.

“We are on track to finally end the days of people like my father carrying around 800 pages of paper,” Wilkie said. The new electronic health records system – expected to take a decade to fully implement – aims to take the guesswork out of medical and military record documentation for veterans filing disability claims.

“The minute that young veteran walks into a military entrance processing station, a record is built of that service,” Wilkie said. “We don’t have to guess. We will know where that veteran was, know where that veteran fought. It will be inter-operative so that when that veteran goes to his local hometown doctor, that doctor puts in information that we can use to create an entire picture of that veteran’s health. I think this is one of the most, if not the most, important projects the federal government is working on now. It will revolutionize the care VA gives to those who have done so much for our country.”

Following Wilkie’s remarks, American Legion Veterans Affairs & Rehabilitation Commission Chairman Ralph Bozella took the podium and explained that at the 2017 Washington Conference, a White House intern gave a presentation that led to American Legion action. “The topic was physician burnout,” Bozella said. “In order to stem that tide, she challenged The American Legion to offer a VA Doctor of the Year Award. We accepted that challenge and went one step further and added to that a VA Health Care Provider of the Year.”

On Tuesday, two VA professionals from the American heartland received those awards.

The American Legion Distinguished Health Care Provider of the Year for 2019 was awarded to Oklahoma City Registered Nurse Manager Mary Ballard. A member of the Oklahoma VA Medical Center’s Home-Based Primary Care Team, she was nominated by American Legion Post 353 in Mustang, Okla. “She is a veteran,” the nomination letter explained. “Her husband is a veteran, and she has a son who is a veteran. Mary cares for her patients in the way she wants other nurses to care for her veteran family members. She cares, and her passion shows.”

The Distinguished Physician of the Year was Dr. Megan Press of the Minneapolis VA Health Care System, a leader in the system’s outpatient primary care health integration team and a compassionate psychiatric care clinician who, according to her nomination letter, “is a consistent advocate for the VA system of care and has been instrumental in attracting more staff to working on the mission of caring for veterans.”

“They represent the best of us,” Wilkie said before helping present the awards. “They are wonderful Americans.”