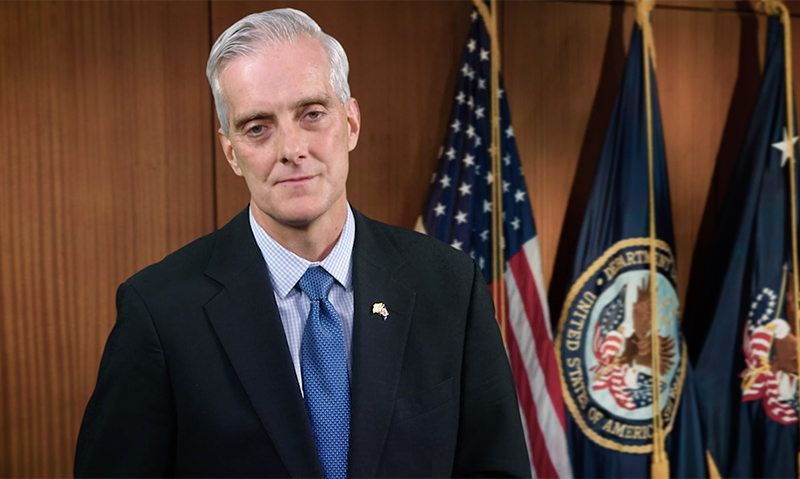 During a March 2 video message to The American Legion Veterans Affairs & Rehabilitation (VA&R) Commission, Department of Veterans Affairs Acting Under Secretary for Health Richard Stone called the Legion and other veteran service organizations crucial to VA’s health care delivery to the nation’s veterans.

That includes, Stone said, assisting in a critical role as the department attempt to provide COVID-19 vaccines to those veterans.

“I want you help us promote vaccine acceptance,” Stone said. “Currently, vaccine supply is a bottleneck for us, and we don’t have enough vaccine for the entirety of the American veteran population. We want, however, to ensure acceptance does not become bottleneck either. As soon as we have a dose for a veteran, we want them to say ‘yes, please schedule me.’ That includes promoting factual information about the vaccine, about responding to questions, but not tolerating misinformation.

“We’ve been very gratified so far at the number of veterans that are seeking out vaccination. We’ve delivered more than 1 million vaccines to veterans. We’ve also been vaccinating caregivers. And we’ve been very, very pleased at the fact veterans all over the nation have really led the nation in acceptance of the vaccine.”

The commission meeting was part of The American Legion’s annual Washington Conference, which is being conducted virtually due to the pandemic. Via a pre-recorded video, Stone said VA has the capacity to deliver around 300,000 vaccinations each week. “We look forward to vaccinating every veteran,” he said.

While VA facilities are open and following increased safety protocols, Stone said technology has provided veterans with “more options today than ever to get care from us.” Stone said telehealth has “sustained us throughout this pandemic. We’ve accelerated our planned expansion of telehealth, and I’m appreciative that today I can keep people up to date through routine and urgent care using various technologies that didn’t exist a year ago.”

Also providing a recorded video address was new Department of Veterans Affairs Secretary Denis McDonough, who was confirmed to the position Feb. 8. McDonough said that for more than 100 years The American Legion “has been one of VA’s, and veterans’, strongest advocates, and we are privileged to have you as a partner. Our partnership matters. It’s critical. And that partnership will be especially important in the months ahead as we work together to do what’s best for veterans during these challenging times. And I will use every opportunity to build a stronger relationship with you. That goes for all our veteran service organizations.”

In what are not “ordinary” times, McDonough praised VA health-care workers for “working around the clock, tirelessly, during this pandemic to battle the spread while providing the best health care for veterans, and, in many cases, to Americans who are not veterans. And lately, they have been working tirelessly to get vaccines into veterans’ arms.”

Murphy said that despite the pandemic, the Veterans Benefits Administration (VBA) had its best year ever during fiscal 2020. “We delivered more benefits faster than we have the last 20 or 30 years,” he said. “When we look at it and say ‘why did it go so well for us …?’ we sent everybody home. They weren’t sitting in meetings. They were home just taking care of veterans, making decisions and moving casework through.”

VBA distributed $31 billion in benefits and paid $1 billion in pensions to 539,000 veterans, while more than $112 million in housing was guaranteed through VA home loans. And $1.2 trillion in insurance coverage was provided.

Flexibility in the benefits process were necessary as the coronavirus stretched into what is now close to a year as a global pandemic. “The telehealth (Compensation and Pension) exam and the (Acceptable Clinical Evidence) exam have been huge for us,” Stone said. “We converted many of the things that we didn’t have to physically put our hands on a veteran to do, and decided to do those examinations through telehealth.”

Walters said that all VA cemeteries have remained open during the pandemic, though restrictions were put in place based on “local, state and federal guidance, to protect the health and safety of our employees and visitors.”

From March until June direct interments were only conducted, which suspended military honors and committal services. Families were given the option to use a direct interment while scheduling a future memorial service.

“Since June of 2020, we’ve restored the provision of military honors and committal services, with limits on gathering sizes based on local and state guidelines, and other factors,” Walters said. “We’re also working to address the inventory of requests for memorial services resulting from the direct interments that were offered.”

Kizer, who served as VA’s Under Secretary for Health in the late 1990s and has served as a consultant for The American Legion, said VA’s performance throughout the pandemic has been “quite admirable, certainly better than a lot of other health-care systems. They’ve had certainly some bumps and challenges along the way, but overall they’ve done quite well.”

Kizer also noted VA’s shift toward more virtual care during the last year. “This particularly includes telehealth … and other methods,” he said. “The shift VA made was really stunning. It was quite dramatic. And the use of virtual care will likely be a part of how VA manages access going forward. It’s much more convenient. (It’s) much easier for the veteran to get their needs taken care of through a video visit or a telephone … than having to drive down, find parking and do all the other things involved sometimes in face-to-face visits.

“Virtual care cannot replace all face-to-face care, so there’s going to continue to need to be full capabilities on the VA’s part. But a very dramatic shift has occurred here.”

VA&R Commission Chairman Ralph Bozella said that the March 2 meeting was a testimony to The American Legion’s ability “to do what it takes to complete our mission to serve America’s veterans. Even though our meeting model has changed, The American Legion VA&R Commission will continue with purpose to insure direct assistance, outreach and support for veterans and their families with VA claims, benefits, memorial affairs and health care.”