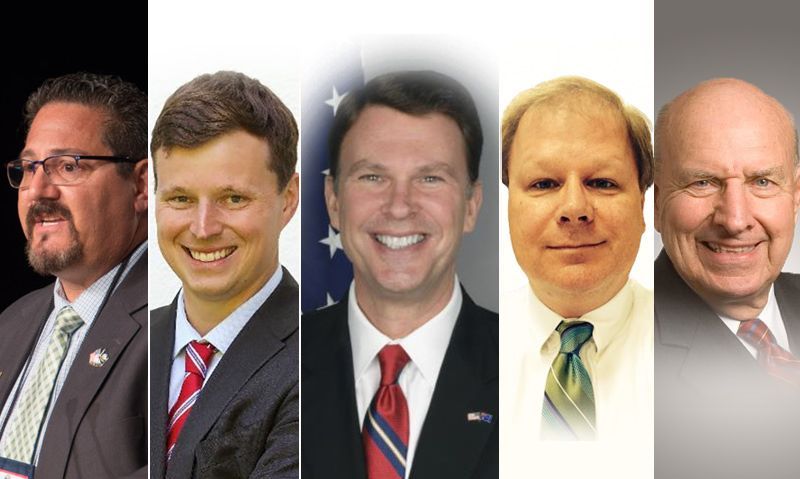 Securing the U.S. Industrial Base: Economic Security is a Matter of 21st Century National Security. This was the topic of a joint panel discussion by The American Legion’s Veterans Education & Employment Commission and the National Security Commission March 1 during the Legion’s annual Washington Conference, held virtually this year due to the pandemic.

Moderator John Berry, a former U.S. Ambassador to Australia and the current president of The American & Australia Association, started the discussion by asking panelists for their thoughts on what actions can be taken to strengthen national security. In relation to this, he mentioned two executive orders that President Biden signed on buying American products and securing America's supply chain; both executive orders call for a 100-day study and a one-year review for all agencies to build a resilience of U.S. supply chains that will protect the United States from facing shortages of critical products.

Thomas Pickering, former U.S. Ambassador to the United Nations among many other diplomatic appointments, opened as the first panelist to address Berry’s question.

“R&D (research and development) is at the heart of our technological development,” Pickering said. “And our technological development is the heart of providing us with the goods and services that are very, very important in our strategic economy. How do we support the war fighter, how do we support our national security objectives, whether it’s in space, in the air, on the land, or on the sea? These are all valuable and significant imports. We need to stay on top of the development of that part of our economy. It is in that sense very valuable and very important that we have in effect a government-private sector partnership that works there, in many cases informally, but in most cases complementary. Our competition in this area is great; and it is increasing.

“And both China and the European Union are also major spenders on the question of research and development. We need to be acutely conscious of that competition. And acutely concerned in my humble view about the necessity to remain on top and stay there in terms of those essential technologies.”

Brad Markell, executive director of the AFL-CIO Working for America Institute, added that “the United States in many areas still has the best R&D in the world. And our competitive advantage with respect to our defense posture, with respect to our industrial competitiveness can key off of that R&D – batteries for grid security and for electric vehicles. We have the best research, we can make sure through the right policies that we create jobs here. We can’t make everything here, but I think we need to tighten up quite a bit how we’re thinking about the make-buy decisions, where we really want to work with our allies, how do we make sure that we have the technology.”

It’s working with our allies and the private sector that Dr. Joshua Walker, president and CEO of Japan Society, believes is needed to succeed in securing our economic security.

“When I look at Asia, it’s clear that the U.S. and China are on a collision course,” Walker said. “And here’s the bottom line, we can’t win this competition with just government … it’s going to take the private sector. When I think about the largest area of competition, it’s not necessarily in the military domain. It’s going to be the internet hacking, it’s going to be used in a way that our tech companies are going to have to step up.

“As we build back stronger and as we think about our economic security, how are we preparing for the next pandemic. This pandemic has made it brutally clear that we can’t do this with just one person … I believe that we need to bring in our Japanese, our other counterparts across Europe and Asia, if we are going to be able to succeed in securing our economic security.”

Walker provided a positive example of working with our allies.

The Japan Society “is an American organization that tries to focus on how countries like the U.S. and Japan, that had such a troubled past, can now be allies,” Walker said. His grandfathers from both sides of his family fought in World War II and now “a story that we cannot forget is how in 75 years my grandfathers could go from mortal enemies of the Japanese to my parents who serve as Southern Baptist missionaries there, to their grandson and son being the president of the Japan Society.”

The national security issue behind organized labor is a statistic that Richard Passarelli, Utility Workers Union of America (UWUA) Director of Veterans Affairs, shared during the discussion. He said that between seven and 10 years from now around 50 percent of membership in organized labor across the country will be eligible for retirement. Passarelli said they are working on programs “to capture that intrinsic value (that will be lost from those retiring) to be able to pass this on so we can focus on infrastructure, the grid, our cyber security teams that we have.”

To help fill the gap that will be faced in organized labor, Passarelli said licensing and credentialing is important to UWUA, “getting credit for veterans who are serving in a capacity to date in the military, and transitioning those skillsets directly into what our employer needs are. Another big part is trying to find what those gaps are within the industry so we can work on filling those gaps and work with our partners at the Department of Defense to hone those skills when folks are transitioning out to get veterans employed in these companies.”

Strength in the 21st Century

Another question posed by Berry was how the United States remains strong while retaining leadership in the 21st century.

Walker said the question is “how do we turn technology into an asset for us. How do we address the issues that matter to the American people, how do we make sure we have good jobs. How do we make sure those jobs continue to take place in America if those jobs are being transformed by technology to equip our workforce. We have to make sure that everybody is trained to be able to compete in a world in which a lot of other countries have gotten ahead start on us.”

The ability to remain strong ties in with maintaining our energy security, and possible cyber-attacks on our grid or health-care system.

Markell took on the energy security topic. "The energy independence that we have achieved over the past 12 years is itself due to an R&D and tech investment made by the government," he said. "We need to figure out how to use that fossil resource that we have that is less polluting, in a way that leads to hydrogen, leads to carbon capture. And in the end, energy is a big strategic deal. We have to secure our energy supply and our energy future as we reduce our emissions. Because if we don’t reduce our emissions, than we all have serious problems … the military has done an outstanding job with laying out what the potential threat is from climate change in terms of our security posture.”

For cyber-security, Passarelli said it’s working with utility employers and encouraging them to utilize military veterans. “We believe we have the brightest military folks that are transitioning out to date that will make a major impact on grid security.”

Passarelli said UWUA is also working with veteran-owned businesses focused on cyber security. But a “problem that we are running into is that while supply chains for utility companies across the country are prevalent, our veterans that are trying to get into those supply chains to bid for some of that work have a lot of obstacles in front of them.” UWUA is working on this obstacle by creating education components for veteran and service-disabled veteran-owned businesses on how to get access to the supply chain in bidding for some of those contracts.

Security of the United States

Berry concluded the panel discussion with thoughts from the panelists on what is the best base for the security of the United States.

“A strong economy, a strong technical advantage, and understanding our position of leadership in the world,” Markell said. “We are going to have to pay a lot of attention to really understanding where the competition is, where the technology is, and how we’re investing – investment in R&D, economic strength is the key to the whole thing.”

Walker added that “we are an immigrant nation that embraces that greatness, not just on behalf of ourselves but for that next generation to come. I really do think that we have to find ways of making ourselves stronger together, while remaining true to our core. I believe you can’t do that without having a strong economy, you can’t do that without leading in innovation … we need to invest in ourselves, we need to really look and find that inner strength."