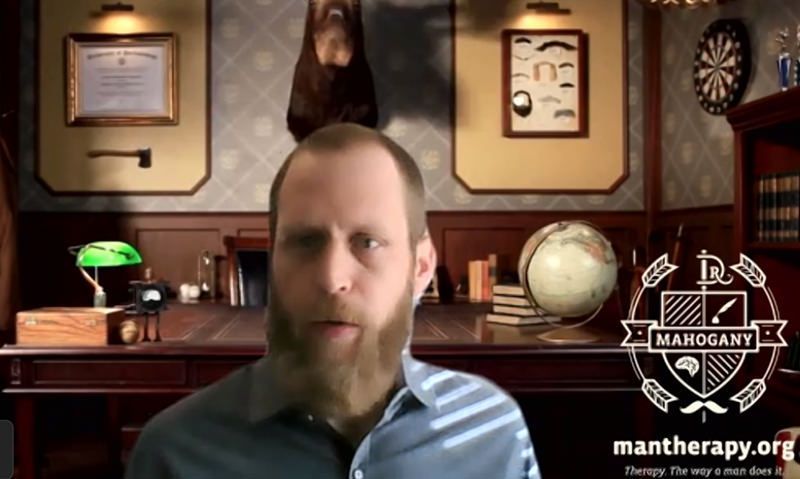 Matt Wetenkamp, a veteran Marine Corps sniper and scout who now serves as veteran suicide prevention coordinator for the Colorado Department of Public Health and Environment.

For about 50 percent of veterans who take their own lives, the time between initial consideration of suicide and actual attempt is less than 10 minutes, says Matt Wetenkamp, a former Marine Corps sniper and scout who now serves as veteran suicide prevention coordinator for the Colorado Department of Public Health and Environment.

“We know that most available methods are rarely fatal,” Wetenkamp told members of The American Legion’s Traumatic Brain Injury, Post-Traumatic Stress Disorder and Suicide Prevention Committee in a virtual meeting Wednesday as part of the organization’s annual Washington Conference. “But one particular method is almost always fatal.”

Firearms, he said, cause more fatal suicides than all other methods of attempt combined.

Wetenkamp and retired U.S. Navy SEAL Jimmy Graham, founder of the Able Shepherd training program – both gun owners – shared with the committee steps that can be taken by veterans and family members to help reduce lethal suicide by firearms and possibly even prevent government attempts to restrict second-amendment rights for some veterans.

“We, as gun owners, can help prevent suicide,” Graham explained in a video presented to the committee. “Protecting your loved ones involves more than keeping them safe from accident or attack. Suicide is a serious issue.”

Graham said that if friends and family members can be on the lookout for signs of suicidality, directly ask the person in question about it, and take steps to secure firearms during high-risk moments, “we can save lives.”

- Spend quality, one-on-one time with loved ones and watch for signs of possible suicidality. Signs include talk of wanting to kill oneself, increased use of drugs or alcohol, reckless behavior, self-isolation and extreme mood swings. Graham said suicide risk also rises after a sudden painful personal, financial or job crisis. “They may talk about feeling hopeless or being a burden to others,” Graham said. “Take these warning signs seriously, and take action.”

- Temporary out-of-home firearm storage may save friends or family members who are struggling, Graham said. Gun shops, shooting ranges and law-enforcement facilities may offer such storage, he added. Firearms can also be loaned to relatives who are legally authorized to possess firearms.

- Safe, secure home storage of firearms – such as combination-lock safes – can improve safety by making access to guns more difficult and time-consuming to reach in times of crisis, which often can be fleeting, Graham said. “Any strategy that builds time between someone in a suicidal crisis and a firearm will keep everyone safer.”

- Asking directly if someone is suicidal, regardless how uncomfortable that may be, can also reduce the risk. Contrary to popular belief, Graham said, the direct approach can improve the situation rather than exacerbate it.

“Reducing suicide within each of our homes is a job for each of us, as responsible gun owners,” Graham explained in the video. “Together, we can protect our families, our friends and our freedom.”

Committee Chairman Ronald F. Conley, a past national commander of The American Legion, made the point that “The American Legion is a strong supporter of the second amendment. We are not here trying to take anyone’s guns away. What we’re trying to do is resolve a problem that is a crisis in this country, of veterans taking their own lives through suicide.”

Conley asked Wetenkamp about some state laws or restrictions that seek to limit or deny gun purchase or ownership to veterans diagnosed with PTSD or other conditions. “As an employee of the State of Colorado, I support all of the laws that are on the books,” he said. “As a lifelong gun owner and veteran and supporter of the second amendment, I view everything I’ve said here today almost as a plea to you – to the firearm community, to the veteran community at large – take this seriously and do what we can to take care of it on our own – if you don’t like people ending up on lists, if you don’t like red-flag laws … if you don’t like the idea of a parent going to jail because someone accessed their gun. If you don’t like all those ideas, then let’s take care of this on our own as a community. We can take care of each other.”

Wetenkamp said the veteran-to-veteran approach is analogous to standard social practices to reduce drunk driving. “We, as a community – whether community means the veteran community (or) the firearm-owning community – need to figure out what our ‘friends don’t let friends drive drunk’ is for guns and suicide. We all have a duty, a role and a voice that we can share. We can be the voice of reason in this conversation … and it does make a difference. It’s our duty, I believe.

“You hear many – whether it’s within the veteran community, firearm community or law enforcement – the sheepdog analogy, the idea that there are the wolves, there are sheep and there are those who think of themselves as the protectors, as the sheepdogs. Well, that applies to suicide prevention and taking care of our loved ones in our circles, as well.”

The problem, Wetenkamp explained, is not improving during the COVID-19 pandemic. Suicide remains a top 10 cause of death in the United States, with more than five Americans an hour reportedly taking their own lives. Veterans, he added, are especially vulnerable due to their access and understanding of firearms. “This is a unique group. Obviously, veterans have a high degree of familiarity with firearms, much more so than the average non-veteran. At least 50 percent of veterans report owning at least one gun. At least a third report keeping one unlocked and loaded at all times. And we know from the numbers that veterans are more likely than non-veterans to use a firearm in an attempt. And I say this without any negative connotations whatsoever. It’s just the facts on the ground.”

However, Wetenkamp made it clear that there is no correlation between gun ownership and suicide. “Firearm owners are not more suicidal. There (are) no higher rates of suicidal thoughts, behaviors, mental health problems… it’s just that when that person finds themself in a suicidal crisis, their attempts are more fatal.”

Shooting, he said, is “the most lethal and the most common method used in suicide attempts. Ninety percent of attempts with guns are fatal. Five percent of attempts with all other methods are fatal. More people die every year by suicide with a firearm than all other methods combined … A lot of lives can be saved by temporarily keeping that one method just further than an arm’s reach away, for a few days.”

American Legion Veterans Affairs & Rehabilitation Commission Chairman Ralph Bozella asked how Wetenkamp is spreading the message about steps families and friends can take to prevent suicide by lethal means. “Bringing the message to communities,” Wetenkamp said, “I consider to be one of my most important job duties.”

The TBI, PTSD and Suicide Prevention Committee also received a presentation from Kelley Tubbs, Washington D.C. VA Medical Center transition care and transition program manager, who explained how the COVID-19 pandemic and virtual treatment were affecting at-risk veterans with PTSD. He said the paradigm has accelerated use of video treatment but added, “You really can’t do acupuncture virtually. You have to do that in person.”

When in-person care or visits from outside vendors have been needed, safety protocols like face masks and home sanitizing have been required.

Many self-isolating veterans, Tubbs said, “were forced to take a step back” during the pandemic. “I think a lot of reflection went on.”

“We’re dealing with a crisis, as far as the pandemic goes,” Conley said. “But this crisis of suicide has been on the books for a number of years. We need to address the issue, as we move on.”