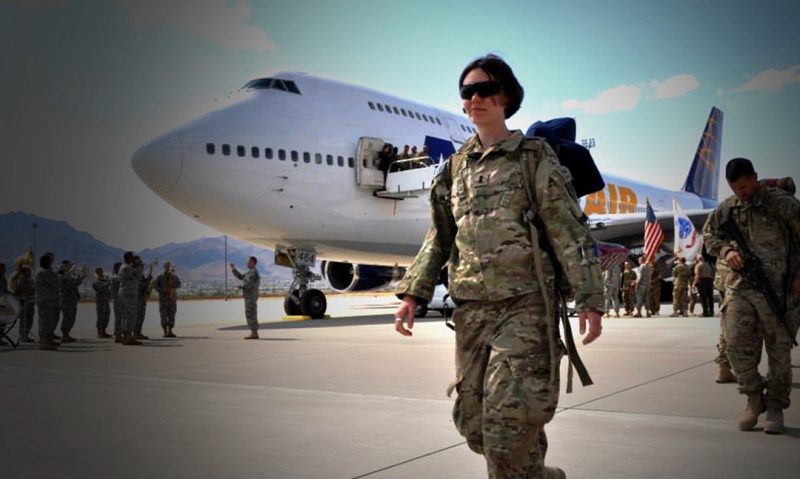 This March, public television stations across the country will air “Soldier On: Life After Deployment,” which shares the stories of three women veterans readjusting to civilian life after being deployed in Iraq or Afghanistan. (To view a trailer, click here.)

“I was very curious who the women are who volunteer to serve in the military today,” director Susan Sipprelle said. “I had no expectation that just by finding these three women I was going to be able to cover such a broad range of topics: military sexual trauma, PTSD (post-traumatic stress disorder), physical impact of serving for women, relationship issues, difficulty finding re-employment at home, and kind of overarching everything, not finding the same purpose in the civilian world that they found in the armed forces.”

Women are the fastest growing population of U.S. veterans. By 2035, the Department of Veterans Affairs projects they will make up 15 percent of living U.S. veterans.

“Integrating women into the military, into all the services that veterans are entitled to and into the veterans community, is an ongoing effort for the United States. What I hope is that ‘Soldier On: Life After Deployment’ can propel that conversation and effort forward,” said Sipprelle, who participated in The American Legion’s Oratorical Contest while attending high school in Rhode Island.

Young served in the Marine Corps for 12 years.

“I loved the structure. It was the first time in my young adult life that someone actually believed in me,” Young said. “I come from an inner city. Very few options were available to me at the time. They said, ‘I think you can be more.’ That resonated with me because I never had anybody say that to me.”

She did two tours of duty in Iraq.

In the film, she shares her experiences in the military “good, bad and indifferent.” They range from a strong sense of purpose and camaraderie to being sexually assaulted.

Her military career ended when she was medically separated after more than three years on stateside recruiting duty. She was diagnosed with uterine cancer, skin cancer and Lyme disease. She had her right knee reconstructed and double carpal tunnel surgery. She had an infant son.

She said she’d never planned on a career outside of the military.

In the film, she’s dealing with the challenges of finding an identity outside the military and raising her son.

Young said, though, that she does not judge her military experience based on any one situation.

“I don’t want to detract from the joy it brought me because it’s like judging a period of time, your whole perspective of something, based off one thing. You can’t do that. Especially with something as complex as the military. And especially from a woman’s perspective,” Young said. “Every young woman in the (movie), in the National Guard, the Army, me in the Marine Corps, every one of us young ladies is proud of our service.”

The documentary manages to catch these subtleties.

“Especially in today’s day and age with all of the social media and all the technology, we tend to misrepresent or project this nice image of ourselves or where society feels we should be at. That’s not life. Life is messy. And it comes with its challenges and peaks and valleys,” Young said. “The military comes with those same things. To not talk about those issues, because they are issues, would be to do a disservice.”

Young is candid, open, self-aware, funny and empathetic on screen and in conversation. Despite (or because of) these qualities, she said watching herself in the documentary was difficult. She said in part this is because she’s since had surgery and lost over 100 pounds. But there are also deeper reasons.

“I think one of the things that stood out most for me is I use humor to deflect because on any given day, I feel like I’m dying inside, you know what I mean? It was just such a raw — you can’t change the subject. It’s there. It’s documented. It was done well. It was accurate. It forces you to deal with it, if you will — or not,” Young said.

“I laid my pain, my soul, my shortcomings, my failures, my successes, my heart all out there."

In the film, Young says it’s difficult for her to relate to non veterans. Sipprelle is not a veteran, but Young said she trusted her.

“I don’t always agree with her politics, but she cares,” Young said. “She’s thoughtful. She’s considerate ... I saw this in her soul. She’s genuine. She remembers my son’s birthday when she doesn’t have to and sends a card. Life kind of hands you these moments that are definitive, and she caught a lot of them on film.”

Sipprelle spent over six months seeking out the three veterans she featured in the film, 18 months interviewing and filming them, and another 18 months editing the movie. The process changed her, she said.

“We all say, ‘Oh, thank you’ to our veterans. But meeting veterans ... through the course of making this film ... has really made me appreciate the people who are willing to put their lives on the line for our country and who do postpone what we would consider ‘normal’ civilian life for some number of years while they serve us,” Sipprelle said.

“For the civilian population that watches it, I hope that they see that we’re people too,” Young said.

Young now works as a substance abuse counselor and intensive case manager for chronically homeless and indigent veterans at Veterans Northeast Outreach Center in Haverhill, Mass. She has been honored by the White House as a Champion for Change. But, she said, she still misses the Marines.

“I think that’s what so many of us are struggling with. We have such a hard time re-assimilating because those moments, that time, the service, the adrenaline, the camaraderie — for me, it was the best time in my life to (this) point. And I don’t know who I am without that identity. The reality of trying to figure out whether or not you like the person you are without that — I don’t know. I’m working on it. I almost feel like I’m walking around with one of those signs on that says, ‘Under Construction.’ But I think everybody does.”

To find show times or learn more about “Soldier On: Life After Deployment,” visit www.facebook.com/pg/soldierondocumentary