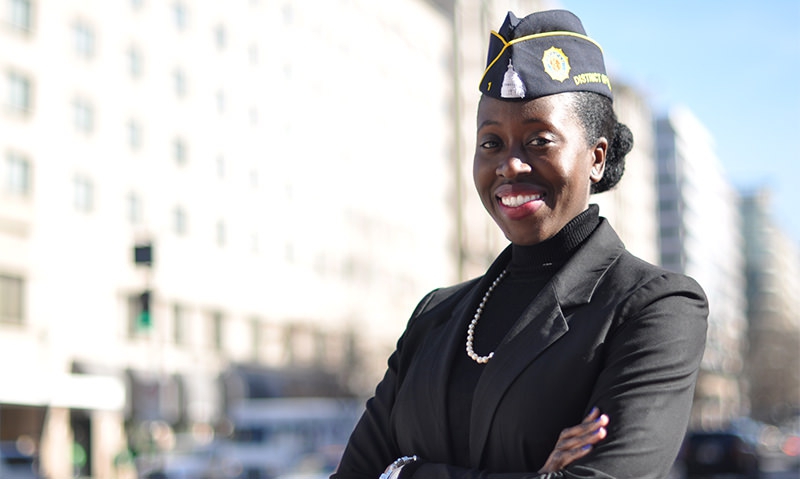 American Legion Women and Minority Veterans Outreach Assistant Director Keronica Richardson has been appointed to serve one term on the U.S. Department of Veterans Affairs (VA) Advisory Committee on Women Veterans, a diverse panel of experts whose task is to inform the VA secretary about issues and programs that impact women veterans, as well as recommend policy and legislative changes.

Richardson, an Army veteran, discussed what it’s like to be in her first-ever appointed role, the work she’s already done for The American Legion, and what her plans are going forward.

Q: How does it feel to be appointed to the VA’s Advisory Committee on Women Veterans?

Keronica Richardson: I’m elated to have an opportunity to serve in this powerful role. There is so much work to be done – I think dealing with women veterans’ issues is like trying to empty the ocean with an eyedropper. When you work on a national level you have to strategically think everything out and how many people that you’re going to affect. It’s a lot of pressure, but I’m definitely up for the challenge.

Being a member of this committee will enable me to be a voice for other women veterans and tackle important issues from different angles, which will create better solutions in the long run.

Q: What will you be doing as a member of this committee?

Richardson: We meet twice a year and then we have one site visit, for a week, at a VA hospital. Last year, I went to the annual meeting that was held in D.C., which had a lot of good information and reports from different organizations within the VA. I learned a lot of statistics about how many women use the VA, and what prominent issues they experience like not having enough gynecologists or someone who can provide treatment for military sexual trauma.

If we can address those issues, then we can address the problem. I think that helps with awareness like why women veterans are not using the VA, or the problems they experience with treatment at certain facilities. I’ll have a much better outlook nationally about what’s going on in the women veterans community, which goes hand in hand with working on a national level for The American Legion.

Q: Being that you are the Legion’s assistant director of women and minority veterans outreach, how important is it to collaborate with the VA?

Richardson: A strong collaboration with the VA is astronomical. The American Legion is an organization that caters to veterans’ needs and the VA is an agency that provides health care services that veterans need. For me, it just makes sense to have a strong collaboration with the VA because it keeps me updated on some of the current changes, improvements and recommendations regarding women and minority veterans.

I wouldn’t be successful in my position without collaborating with the VA – it should go hand in hand. For example, I meet with the director of VA’s Center for Women Veterans once a month, but that’s not the only time that I speak with her. I also stay in contact with one of the chief doctors whose area of study is women veterans. I primarily work with her when we have to provide testimonies. She provides me with good feedback and it helps to have that advice before we say that we support a bill that somebody from Congress sends our way.

The main thing is togetherness. Good communication and constant contact with the VA is necessary for success.

Q: What inspired you to want to be a part of this committee?

Richardson:  The first time I went to a meeting for VA’s Advisory Committee on Women Veterans was a couple weeks after I got to The American Legion in 2017. I was inspired by the depth of knowledge that was discussed, presented and questioned upon. After that meeting, I wanted to know more. I researched the last report from the committee to see what progress was made from 2016 to 2017. I was thoroughly impressed with how the research and recommendations were presented, and I immediately subscribed to receive email updates from the committee. Then a couple months later, one of my colleagues at The American Legion sent me the nomination packet and told me that I should apply because they thought I would do well in that position. I hesitated at first and left the packet lingering in my inbox for a couple weeks. I knew, however, that this is an honor in itself and another way for me to serve our veterans. So, I decided to apply.

Q: Speaking from your own experience as an Army veteran, what issues are most important to you and how do you plan to address them?

Richardson: The awareness of benefits is a really important issue. I served in the Army for almost nine years before leaving as a junior officer. Like most veterans, I didn’t know what benefits that I was entitled to when I got out of the military. This may sound cliché, but I honestly didn’t think I was a veteran because I never considered myself as one.

Another issue is the lack of research being conducted solely on women veterans. Sometimes, they are left out of important research and instead merged together with males. Women tend to have greater needs and face different issues at the VA, like not having enough gynecologists on staff.

In order to address these issues, I plan to continue advocating and creating platforms for women veterans so they know that there are different resources and benefits available for them.

Q: What are your next steps in terms of advocating for equality and better treatment among women veterans?

Richardson: The American Legion is working on a resolution to establish an ad hoc committee. It’ll be good to have other women, like a panel or committee, help pinpoint the issues that I can’t do by myself. I also want to be more involved in terms of seeing who the VA’s direct women veteran coordinators are at the state levels and work together to report to VA officials and ultimately Congress. I look forward to doing more reporting and seeing how we can fix issues at the national, state and county levels.

Last year at the Legion’s National Convention (in Reno, Nev.), I hosted a women’s conference. The Legion conducted a survey for women veterans in 2011, asking what they needed the most, what they would like to learn more about, and other areas of concern they had aside from medical care. Our focus was on financial awareness, mental well-being, how to stay physically fit after getting out of the military, and how to be a mentor/mentee. We hired an independent contractor called SkillPath and they brought a speaker out to teach the courses for the women veterans that attended the conference.

This year (at National Convention), it’s going to be a lot different. We’re still in the early planning phases of it but there will be a lot more speakers and other events happening.

Q: In today’s society, it appears that more women like you are holding leadership positions. For the first time in almost 100 years, The American Legion elected a woman to be its national commander. What does that say about women veterans and the ability they have to make a difference?

Richardson: I think it says a lot about what women veterans can achieve. When it comes to the Legion electing its first female national commander, it’s important that she continues to serve all veterans instead of showing favoritism toward women veterans. The value of this organization has been going strong for nearly a century and will continue to do so with her guidance.

It also shows that just because you’re a woman doesn’t mean that you can’t serve or break barriers. Going forward, I want to set the tone for what strong leadership looks like in the women veterans’ sphere. I’m happy to see where this goes.