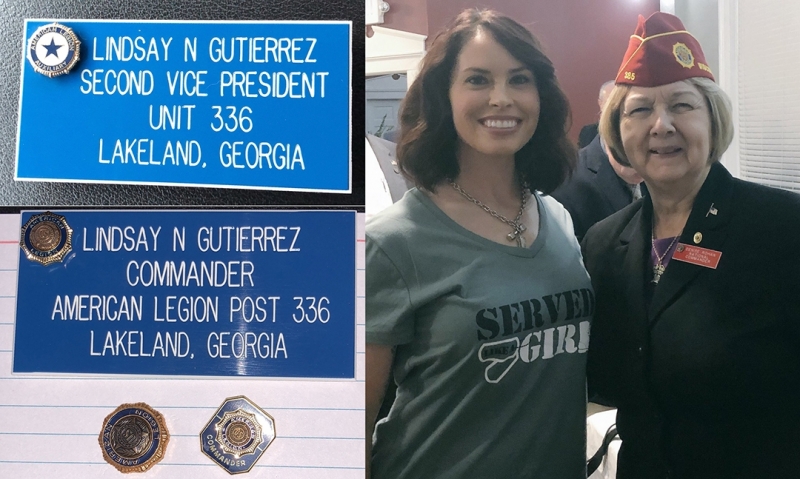 A scholarship softball player in college, Gutierrez took the military route after graduating with a theater degree, serving in the Air Force from 2010-2016 with deployments to Qatar and Djibouti. After leaving the military, Gutierrez became a veterans advocate, winning the Ms. Veteran America title in October of 2017 and using that platform to speak out on women veterans’ issues.

She’ll continue to do so after putting that title behind her, sometimes wearing a Legion cap. Gutierrez recently was elected as commander of American Legion Post 336 in Lakeland, Ga., AND as second vice president of the post’s Auxiliary unit.

Gutierrez, who now lives in Georgia and is studying to be a social worker, talked with American Legion Social Media Manager Steven B. Brooks about her military experience, serving as Ms. Veteran America and how The American Legion can help women veterans transition into civilian life.

Steven Brooks: How did you end up in the Air Force after graduating from college?

Lindsay Gutierrez: My grandfather … had planted this seed in me a long time ago. He had always talked to me and my cousins about joining the military. And my grandfather on my mother’s side was also Air Force as well. So it was kind of one of those things that I feel it was instilled in me at an early age, but it really wasn’t emphasized to join the military. My grandfather kept saying, ‘You should go into the military’ – kind of joking, but kind of serious at the same time.

So I got my degree in theater but nothing was really happening. I moved out to California and it was the same thing. Every time I tried to do what I wanted to do, I was just hitting roadblock after roadblock. Then that little bug in my ear from my grandfather said ‘Go join the military.’ It was in May of 2010 I finally decided that I was going to talk to a recruiter. And everything just really started from there.

Q: What did you get out of those six years in the Air Force?

I saw mentors of mine – senior NCOs, NCOs that were my direct supervisor – doing everything possible to set me up for success. So I was trying to do my best to also set others up for success when I became that supervisor. I realize now … whenever you’re helping others, there’s always so much more that can be done. And you realize that your voice really matters. I truly see the importance of using your voice.

Q: Is that desire to use your voice what led you to competing for Ms. Veteran America?

A: Absolutely. It was during this really crazy time during my transition from active duty to now dependent. My first date back stateside was my first day in Georgia was my first day as a civilian. Here I was not just coming back to an unfamiliar home (after) being away from America for the last five and a half years. I had absolutely nothing other than my husband and my pets.

I was trying to make something of myself, and I was feeling weird about what I was supposed to be doing. Coming across Ms. Veteran America, I realized there was something out there for women veterans to be able to empower and help those who don’t have that voice. I completely doubted myself for this. I didn’t think I was the right person for the job. I realized it was just getting out of your comfort zone (and) talking to people. You realize you have a lot more in common with others than you think. And what I found out was a lot of people that I encountered – men and women – we’ve all at some point kind of felt invisible. That motivated me to want to get out and make a change … and put the veteran platform up as high as I could.

Q: What have these eight months as Ms. Veteran America been like for you?

A: It’s been such a whirlwind. I’ve met people I’ve never thought I’d be crossing paths with: the first woman four-star general of the military, Gen. (Ann) Dunwoody. I’ve met so many incredible, empowering women. And on top of that, to meet some pretty significant names outside of that. It’s really been an eye-opener to see how much support is around whenever you open up your heart and mind to wanting to receive that.

I think … as veterans, we try to say ‘We’ve got it. We can do it. We don’t need that help.’ But the truth is that we do. And whenever you start telling people your story – and that’s what I was doing with Ms. Veteran America – they really saw it … ‘That’s exactly how I felt.’

Q: What led you to joining The American Legion?

A: I wanted to try to get involved with veterans orgs because we were new (in Georgia) and I wanted to start reaching out and meeting new people. Probably around (May 2017) is when I found out the Lakeland post had been reestablished. I went to their meeting and really spoke about what I was doing (with the Ms. Veteran America competition). From there, I decided to join. I felt like it was just one of those things where I needed to be involved. I thought that the Legion had done so much for me already, I want to be able to give back to them. And when I found out I was also eligible to join the Auxiliary, I definitely took advantage of that. I understand both sides. I know what it’s like to be a military spouse because my husband’s active duty. And I know what it’s like to be active-duty military and a veteran. I can bring both of those experiences to the table.

Q: And how did taking on a leadership role at Post 336 happen?

A: I had seen that there were (offices) that were going to be open. I was interested and thought this was really important. I started looking at the jobs … and actually put my name in for secretary. I emailed our judge advocate, and he emailed me back and said, “This is great, but you’re a commander.” I was like “wow.” I felt really honored. I agreed, and I got the position, and here I am.

Q: What do you think The American Legion can do at the grass-roots level in assisting with homelessness and other issues facing women veterans as they transition from the military to civilian life?

A: We have to talk about the issue instead of brushing it off to the side and pretending it doesn’t exist. We’re talking about a very valid and real situation that’s happening across the country. Being part of the Legion allows us that cohesiveness as veterans to understand, “You have a real story. I have a real story. Here’s what we can do together.” By bringing that to the light and encouraging each other that this is something we need to bring to the light … the Legion is very integral in bringing awareness to this cause, especially at the grass-roots level. Because that’s where change is going to start.