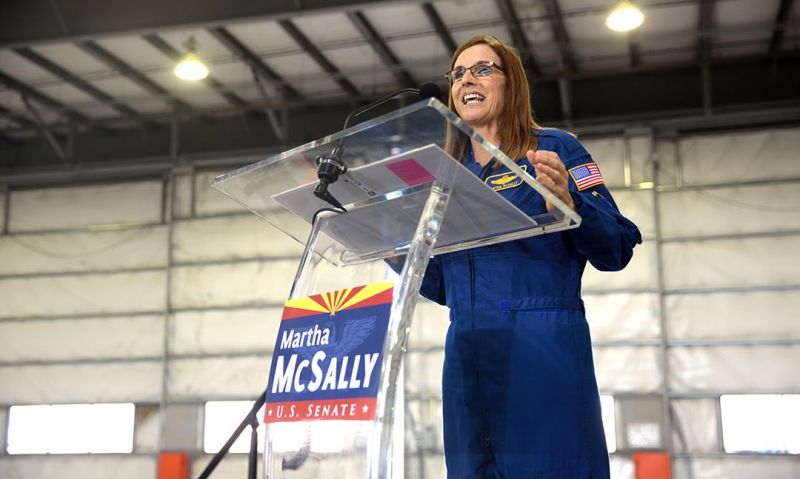 When Sen. Martha McSally, R-Ariz., revealed during a March 6 Senate hearing that she is one of the approximately 1 in 4 military women who report being sexually assaulted during their time in service, she brought back into the public eye the epidemic that has long plagued the military.

"I felt the need to let some people know I, too, was a survivor," she said during the hearing. "I was horrified at how my attempt to share generally my experiences was handled. I almost separated from the Air Force at 18 years of service over my despair. Like many victims, I felt like the system was raping me all over again."

In her letter to Secretary of the Air Force Heather Wilson, McSally cited statistics from the Department of Defense's (DoD) fiscal year 2017 annual report on sexual assault: 5,277 servicemembers reported a sexual assault that occurred during their military service.

"And these were just the women and men who bravely chose to report their assault," McSally wrote. "This is simply unacceptable."

She lauded the “survivors who found the strength to share their stories, report their assaults, and demand accountability, justice and change.

"It is because of you that a light has been shined on this silent epidemic," she said. "I thought I was strong but felt powerless. The perpetrators abused their position of power in profound ways."

“Preventing sexual assault is our moral duty,” he wrote in a DoD-wide memo for Sexual Assault Awareness and Prevention Month last April. “By its nature, sexual assault is one of the most destructive factors in building a mission-focused military.

“While casualties on the battlefield are understood to be consistent with our military duties, I accept no casualties due to sexual assault within our ranks. Military leaders are to be zealous in carrying out ‘in loco parentis’ responsibilities and ridding our ranks of such illegal, abhorrent behavior.”

Sixty-six percent of women in the military and six percent of men report being sexually assaulted or harassed, according to a Smithsonian poll conducted with the help of Stars and Stripes.

The obstacles victims of military sexual trauma face do not end with active service.

Military sexual trauma, or MST, is the term used by the Department of Veterans Affairs (VA) to refer to experiences of sexual assault or repeated, threatening sexual harassment that a veteran experienced during his or her military service.

Advocacy for victims of MST is one of The American Legion's top legislative priorities for the 116th Congress.

VA often denies victims of MST benefits based on a claim of PTSD – despite MST being a cause of PTSD – because they cannot produce evidence of the assault. MST victims often do not report the assault for varying reasons, including “concerns about negative implications for performance reports, worries about punishment for collateral misconduct, and the perception of an unresponsive military chain of command.”

In FY 2017, the Veterans Benefits Administration (VBA) denied about 5,500 claims for PTSD related to MST; 169 of those denied claims were reviewed by the VA Office of Inspector General (VAOIG). The review concluded the VBA did not correctly process veterans’ denied MST-related claims in 82 of the 169 cases. The VAOIG estimated 1,300 of 2,700 MST-related claims denied were processed incorrectly during the review period.

“Veterans should not experience additional harm in the process – especially when processing MST-related claims,” American Legion Deputy Director of Claims Services Greg Nembhard said during testimony in November 2018. “Finding ways to ensure these veterans receive the services they deserve is one of the highest priorities of The American Legion."