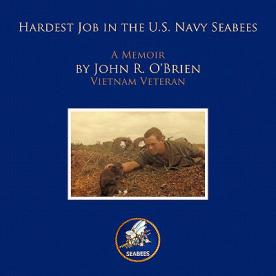 In keeping with his family tradition, O’Brien joined the Navy one month after graduating high school in Somerdale, N.J., in 1966. During World War II in the Pacific, his father, John, and his uncles Joe, Marty and Paul, all served in the Blue Water Navy. His uncle Ben also served in the Navy Seabees in the Pacific. After qualifying at age 17, O’Brien was off to boot camp with a rating of Seaman Recruit Nuclear Field.

“The Hardest Job in the U.S. Navy Seabees” is a boots on the ground enlisted man’s story. In addition, it is a detailed time line of O’Brien’s two tours of duty in Vietnam with nearly 100 photographs.

John R. O’Brien earned his character and work ethic as a team player while serving in the U.S. Navy Seabees. His service was a stepping stone toward all of his life’s accomplishments. O’Brien is a member of the John J. Morris American Legion Post 62 in Peoria, Ariz., and a lifetime member of the Navy Seabee Veterans of America, Island X-5 in West Valley, Ariz.