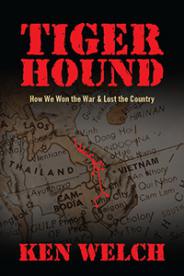 In 1963, the strong and dictatorial Vietnamese Government was battling an insurgency quite successfully with US support. US leaders encouraged and supported the overthrow of the government. The communists took advantage of the chaos that followed and began massive infiltration.

Efforts to slow the movement down the Ho Chi Minh Trail were hindered by secrecy and government bureaucracy. US leaders imposed rules of engagement that allowed the enemy to rest and recuperate in sanctuaries.

The enemy suffered horrendous casualties and would have surrendered but for the encouraging words of the US media. Finally, with the enemy in full retreat, the US military was ordered to leave. Our Vietnamese allies were left to defend themselves with US weapons and equipment but little ammunition and supplies. The outcome was a disaster as we left behind hundreds of MIAs, thousands of Amerasian children, tens of thousands of supporters, and millions of allies.

"Tiger Hound" is available through most major book stores and from Amazon.com.

I spent 7+ years in Vietnam as an Intelligence NCO, Warrant Officer, and Officer. I still believe that our intentions were honorable, that our cause was just, and that the betrayal of our Vietnamese allies was disgraceful. I wrote what I saw, read, heard, and did at the time. It is much different than the history books.