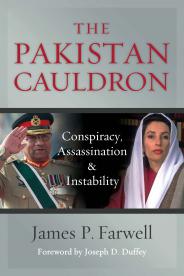 Americans summarized the killing of bin Laden in two words: mission accomplished. Pakistanis saw it differently. They felt that the attack placed them in an untenable position. Either they did not know that bin Laden was there, rendering them ignorant or incompetent; or else they were willing conspirators. The emotional Pakistani response is an outgrowth of a long-standing political culture that has bred conspiracy theories and a sense of betrayal. Americans may find that absurd. Still, Pakistan is a nuclear power with 180 million people and a hundred nuclear warheads. It plays a key role in the region and it actively influences what happens next door in Afghanistan. We have to engage with it effectively. Doing so requires a clear-sighted grasp of Pakistani politics and attitudes, the effects on the U.S., and what we can do.

I hope that you read and enjoy the book. It was a pleasure to write and my goal was to make a positive contribution to the discussion about Pakistan and the challenges that we confront in dealing with it.

“This is a powerful story of tragedy, avarice, power, corruption, deceit, incompetence, treachery, sabotage, and insurgency. James Farwell’s entertaining and insightful analysis reveals the strategies for influence that set the stage for our experience in Afghanistan—strategies that will ultimately determine the fate of the Taliban and Al Qaeda.”
— MAJ. GEN. DAVID J. SCOTT, USAF (RET.), former deputy director, Center for Special Operations, U.S. Special Operations CommandORDER FROM AMAZON OR BARNES & NOBLE. Follow me @jamespfarwell or on Facebook.

Senior Adviser to J5, US SPECIAL OPERATIONS COMMAND; After 9/11, volunteered to help the Pentagon and in 2003 became an independent consultant to it. Expert on information strategy applied to terrorism, Middle East/North Africa issues, sovereignty. Today also an internationally recognized expert on strategic communication and cyber war. Senior Research Scholar in Strategic Studies, Munk School of Global Affairs, University of Toronto.