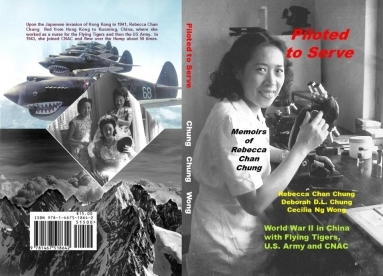 Rebecca Chung (1920-2011) was born in China, being the daughter of a participant of the 1911 Chinese Revolution. After completing her nursing education in British Hong Kong during the Japanese invasion in Dec. 1941, she fled to Free China. After a difficult journey, she joined the Flying Tigers (later the U.S. Army) in Kunming. In 1943, she joined China National Aviation Corporation and made weekly flights over the Hump. After the war, she became a prominent nursing educator in Hong Kong. Read more: https://en.wikipedia.org/wiki/Rebecca_Chan_Chung http://www.facebook.com/PilotedToServe