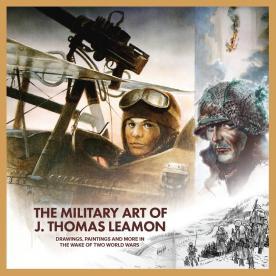 This book is a handsome, delightful and very moving compilation of paintings and sculptures of World War I fliers, models and dioramas of Middle Eastern warriors; models of WWI airplanes, and cartoons and letters from the artist's time in the infantry in WWII. The text, aside from quotes from Tom's letters, was written by Tom's brother, James S. Leamon, retired History professor from Bates College. The book is splendidly designed by Rene Damon, a web designer. It has received excellent reviews from readers: some have said that it gave them a new and deeper understanding of a soldier's experience in war.

Tom Leamon is a Purple Heart veteran of World War II's "Battle of the Bulge". He is a 1949 graduate of the Rhode Island School of Design, an editorial cartoonist and book illustrator. He grew up in Cambridge, Massachusetts, is married, has children and grandchildren and now lives in Western Massachusetts.