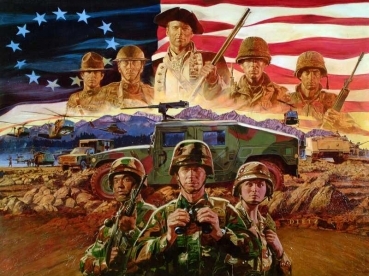 Retired Colonel, Spencer Free Wurst was in the US Army during the 2nd World War and during the Korean Conflict, his accounts of battle were “to say the least” inspiring.
Colonel Wurst joined the US Army National Guard at the age of 15 as a private with the 112th PA, in 1940, after only 2 years and at the age of 17 he earned the right to blouse his trousers as a graduate of the parachute school at Fort Benning, By age 20 Colonel Wurst was a platoon leader and leading men into battle. Colonel Wurst was a rifleman, spent the most of World War II in the European Theater of Operations as a squad leader or platoon sergeant in Company F, 505. He made three of the four regimental combat jumps, dropping into Italy, Normandy, and Holland. Spencer Wurst got his baptism of fire in Italy during the Battle of Arnone; the jump on D-Day and the liberation of Ste. Me're Eglise (for which he was awarded a Purple Heart); a grueling month of combat in the hedgerows of Normandy (a second Purple Heart); the ferocious battle with the German SS for the highway bridge at Nijmegen, Holland (Silver Star); and survival in the Ardennes, where he found himself as point man on his twentieth birthday, in a long, bitter march toward the shoulder of the Bulge.
Colonel Wurst was born in Erie, Pa on December 19th 1924. He married Mildred Shugart in January 1946. Father of Chris, Carolyn, and Spencer. Colonel Wurst retired from The US Army in 1975 as a Full Bird Colonel, he is quite proud of the fact that he ended up commanding the same 112th infantry regiment that he was part of when he was a private.
What an experience this has been for me and my committee members, Commander John Joseph and Ron Lijewski. For nearly 2 years we have been working on an award to honor and recognize a soldier for acts of bravery during combat operations respectively at sea, on land and in the air, for gallantry during active operations against the enemy. For a selfless and or courageous act taken risk of his own life with full awareness of the danger involved.
A plaque will be commissioned in the recipients name with a list of awards, medals and ribbons. This plaque will have a picture of the service members (or immediate family members) choosing. A brass plate will be embossed with a short story of his/her act of bravery and the operation that he/she was involved in. This plaque will be on tour throughout the Districts American Legion posts and will proudly be displayed in a conspicuous place for all to see. Each post will have this honored plaque to adorn the wall for a period of one month and at the end of each month a detail will be honored with the task of transporting the plaque to the next post and finally after this honored plaque has been recognized at each post it will make it’s way back to the soldiers home post to be on display for eternity.
We have interviewed some great men, who without a doubt are some of the bravest men in the world. I am humbled to just be in their presence. Each time that I interviewed a soldier, sailor or a fly boy, I was sure that I had found him, the Above and Beyond Bravery award winner, the stories that I have heard would shock most and indeed they did shock me.
Award date June 16th 2012 Place Wesleyville Post 571 in Pa. Time; 4:30 till 9:30. Please contact me for reservations.
Todd Van Tassell 29thPA Son's of the American Legion Adjutant. 814-964-8943. 29thpa@gmail.com facebook - sonsof americanlegion

My name is Todd Van Tassell. I have been working on this award for 2 years, it is almost complete for this years Above and Beyond Bravery Award recipient. I have put together quite an honorable display of patriotism, that will be displayed at every post in our district. I call this a tour of duty. I have interviewed countless American Heroes for this award and have found the perfect candidate just 2 days short of the cutoff date. Colonel Spencer Free Wurst WW II Hero, Leader of Men.