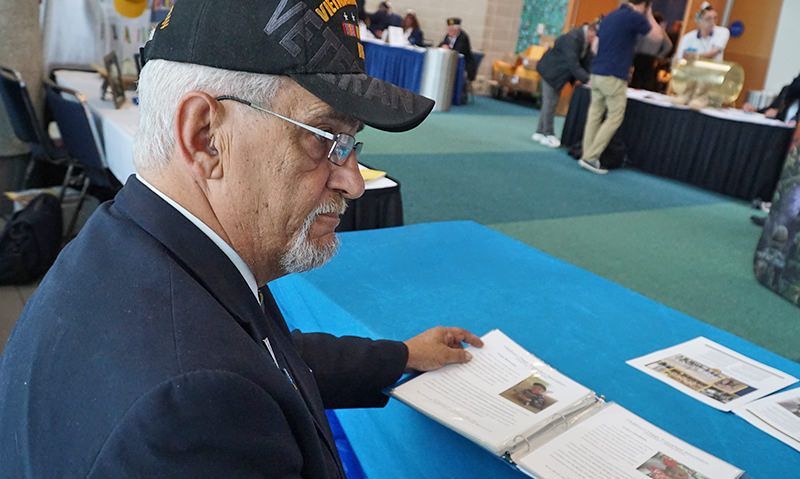 Lenny P. Hart, New Jersey COTA representative, talks about some of the children that have been helped by the funds that are raised in his department. Photo by Holly K. Soria

Lenny Hart, a U.S. Army combat infantry veteran of the Vietnam War, chokes back tears as he begins to explain how and why his American Legion mission over the last decade has been to raise money for the Children’s Organ Transplant Association (COTA).

“My daughter passed away in a car accident in 1995, and we donated her organs,” he says from a table next to the COTA display at the American Legion Department of New Jersey Convention Thursday in Wildwood, N.J. “That’s when I took the bull by the horns.”

Since 2009, Hart has led a department-wide effort to support COTA, in memory of his daughter, Susan Ann. The annual event he organizes at American Legion Post 493 in Mystic Island has raised nearly $400,000 in that time. The October fundraiser includes an antique car show, bands, an auction, a bake sale, pumpkin painting and more. Each year, a Disney theme is chosen for the activity, and when they do it again on Oct. 13 at Mystic Island Post 493, “Pirates of the Caribbean” is the selected theme, and many families of children who have received or await organ transplants will be on hand.

The entire American Legion Family – American Legion, Sons of The American Legion, American Legion Auxiliary and Legion Riders – also raise money at their local posts across the department for COTA, adding to the October event’s contribution, making New Jersey one of the nation’s most generous supporters of the program, which assists families with the often-staggering costs of organ transplants for children. According to COTA, organ transplants can cost up to $800,000. TRICARE, VA and insurance do not always cover all of the expenses, explained COTA President and CEO Rick Lofgren, who was at the convention. “In most cases, the bigger costs are transportation and lodging for families,” he said.

Lofgren said the American Legion Families of New Jersey, Florida and Indiana are among the nation’s top supporters of COTA, which began its New Jersey relationship about 30 years ago. “The Legion makes a huge impact,” he said. “New Jersey and Florida are always fighting it out for No. 1 and 2. It’s always a battle.”

Hart is hopeful 2019 will be a record-breaking year for the Department of New Jersey’s effort. The total raised for COTA by the department in 2018 was $48,652.57, he explained. Already in 2019, The American Legion of New Jersey has exceeded that, with $48,832.50 collected by the June department convention, with more donations expected over the weekend and the big October event yet to come.

“We have 45 kids across the state of New Jersey who have received organs or are waiting for them right now,” said Hart, who is so devoted to COTA, his personalized license plate is the organization’s acronym. “Giving them a second chance at life – that’s what it’s all about.”