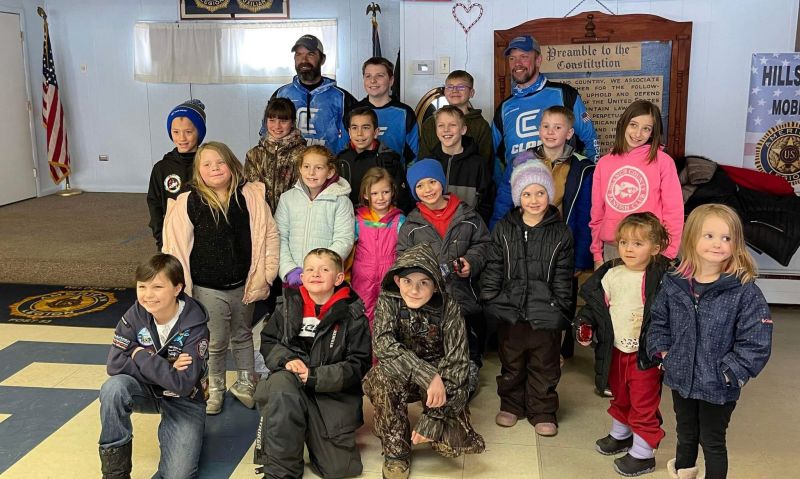 In 2021, Leighr A. Wright American Legion Post 53 of Hillsdale, Mich., hosted its first-ever Baw Beese Open Extravaganza, a tip-up ice-fishing tournament on the six lakes of the Baw Beese Lake chain. Anglers from all over the area participated in the event.

But this year, Post 53 wanted to expand the event to include one of The American Legion’s Four Pillars – children and youth.

On Feb. 11-13, Post 53 again hosted the Baw Beese Open Extravaganza, but this year it included local high school students, as well as younger children and their families.

Post 53 Commander Chris Parks said one of the fishermen who took part in the 2021 event, tournament ice fisherman Joe DeVera, mentioned possibly involving kids in the 2022 event. Parks jumped at the idea.

For high school students, Post 53 organized its first-ever High School Ice Fishing Invitational. Five-person teams from four area high schools competed in the tournament – an event Parks hopes will gain the notice of other ice-fishing tournaments organized in Hillsdale County and expand to other high schools.

After the high school tournament ended, DeVera and fellow Clam-sponsored ice fishermen Israel Ferguson put on a fishing seminar at Post 53 before taking the children and their families out on the ice to fish. Parks said around 19 families attended the seminar, with children ages 9 and younger.

“They brought a bunch of swag from Clam – stocking caps, mittens, all kinds of stuff to get them excited about it and put on new gear,” Parks said. “Each one of the kids got their own fishing pole. Every kid caught a fish, and their parents were there with them. And the kids were excited.”

Parks said the recent fishing event is part of Post 53’s mission to expand its reach into the local youth community, noting Hillsdale’s Summer in the City later this year

“We are trying to figure out how we get kids in on that,” Parks said. “Last year we did an adult version, just like we did with (the fishing event). We got some of the wrinkles out, so now, how do we bring (youth) in? That’s what we’re doing with all our events going forward.”