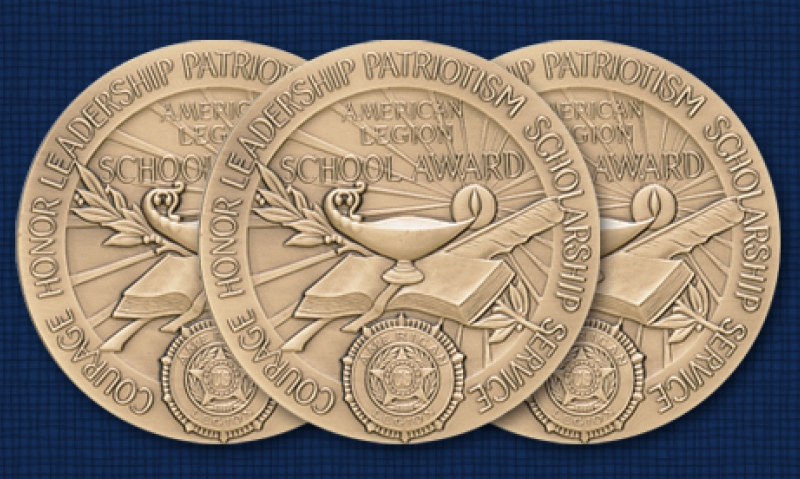 Youth are often awarded for their scholastic achievements, but The American Legion believes they should also be praised when they demonstrate strong qualities of character and good citizenship. That's why, since 1926, the Legion has recognized such students with its School Award Medal Program.

In 1921, the Department of Pennsylvania created the School Award Medal Program for the purpose of instilling character and helping perpetuate the ideals of Americanism among youth. The award is given to a boy and a girl in the graduating classes of elementary school, junior and senior high school, and college. Those who receive a medal must exemplify six qualities that define character: courage, honor, leadership, patriotism, scholarship and service.

Candidates for the award are voted upon by a school's faculty and members of the candidates graduating class through a secret ballot casting. The local Legion post involved with the school makes the final selection upon receiving recommendation from students and faculty. Each awardee receives a certificate and a medal with the six qualities listed on the face of the medal, as the back bears the Marine Corps motto, "Semper Fidelis" ("always faithful").

The program's success for the past 90-plus years has been prominent. In its first year, 145 students received medals and in 2013, more than 18,000 were awarded medals. And every year the department with the strongest activity in the School Award Medal Program receives the Ralph T. O'Neil Education Trophy, named for The American Legion's 1930 national commander.

Now that the 2014 - 2015 school year is in session, Legion posts are encouraged to visit local schools to promote the program and its awards. Download a brochure on The American Legion School Award Medal Program by clicking here.