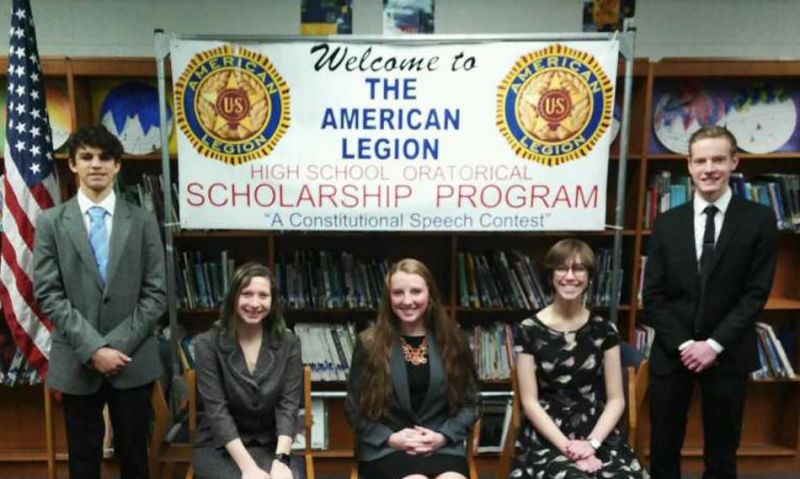 Six years ago, the post resurrected its American Legion Boys State and Auxiliary Girls State program after not sponsoring a delegate to either one for 20 years. Now, 127 rising high school seniors have been sent to both Department of Michigan programs over the past five years.

“We are a (Boys and Girls State) recruiting success story here for the state of Michigan,” said Mark Brejcha, District 10’s Boys and Girls State recruiter and former adjutant of Post 98, which has about 112 members. “We have been charging hard with Boys State and Girls State and these parents know us, they have confidence in us and what we are trying to sell them is genuine and of value."

When Post 98 reached out to several of those parents whose son or daughter had attended Boys or Girls State about participating in the post’s first Oratorical Contest, it was a yes.

“Those parents know the positive experience of our programs; they know the value. So it paves the way for Oratorical to be successful here.”

A few weeks ago, Post 98 conducted its first Oratorical Contest with five students from Big Rapids High School and is sending the top two onto the district competition this weekend.

“A tie to the community and the future of the Legion is what prompted us to host the Oratorical Contest,” Brejcha said. “I think our future hinges on our ability to reach out to the community, to get into the schools and be the face of The American Legion.”

“We are doing everything we can to get our kids involved, to bring up the next generation and to be in the community,” he said. “And (Brejcha) is all about making sure these kids learn about who we are as a country. He has been the driving force to get this (Oratorical) program off the ground.”

After a 30-year career in the U.S. Air Force, Brejcha retired as commander chief and became a sixth grade social studies teacher at Big Rapids Middle School. Over the past seven years of his teaching career, Brejcha has built a rapport with students and their parents so this, along with meeting with school’s social studies team, has helped with recruiting efforts into Post 98’s youth programs.

When Post 98 was resurrecting its Boys and Girls State program, Brejcha approached the Big Rapid’s school superintendent for permission to ask members of the social studies team to help identify potential delegates. The discussion revealed that the superintendent was a Boys State alum, and six other educators at Big Rapids High School also attended a Boys or Girls State program. “It just started with a conversation,” Brejcha said. “Now, we have credibility because the teacher that stands before these young men and women attended our program.”

Thanks to the relationship with the social studies team, Brejcha discussed the Oratorical Contest program with them and asked for student recommendations. The team provided 28 names to Brejcha.

With student names in hand, Brejcha followed the same steps he takes with Boys and Girls State – he sent letters directly to the parents of the students. These letters share congratulatory remarks that their son or daughter has been nominated to participate in Post 98’s Oratorical Contest; it lists Brejcha’s contact information; provides a link to National’s Oratorical page (legion.org/oratorical); and mentions that Brejcha will be following up by phone within a week to discuss participation.

Brejcha received 12 responses back of interest. He held a meeting with the students and parents, which resulted in this year’s five competitors (a freshman, junior and three seniors who attended Boys or Girls State through Post 98 sponsorship).

Post 98’s Oratorical Contest was held inside Big Rapids Middle School auditorium. As Brejcha watched the contest, “It was revealed at that time that these young men and women sacrificed their time and their effort and had the courage to get up there. I told them all along, ‘Let’s give it a go. This is new for me. And including me, we’re all going to grow from this.’”

With about 112 members, Post 98 is relatively small but still sponsoring a large amount of delegates to Michigan Boys and Girls State. In 2019, they sent 32 young men and women.

Two years ago in a three-month period, Yontz raised $12,000 for the post program by going out into the community and asking for donations. “If you have been recommended, you go," he said. “That’s why we fundraise … so nobody gets left behind.”

And Brejcha has a list of 30 community members who are Boys and Girls State alumni that donate every year. “We have the flywheel effect going on where people are anticipating (to hear about the program), donating and students anticipate getting a letter from me,” he said.

The resurrecting of the Boys and Girls State program also has recruited 12 new members into Post 98. “Our stature in the community is very positive,” Brejcha said.

Find your Grant. Brejcha referenced reading the book “Lincoln on Leadership” where President Abraham Lincoln went through several generals before he found his one – Gen. Ulysses S. Grant. So within the post, find your "Grant" who is motivated to take on the program to ensure its success. And the post commander has to promote. “The commander’s role is to go out and bridge the community and make them aware of what we’re doing,” Yontz said.

Get into the schools. Brejcha emphasized that your first contact should be with social studies teachers – not guidance counselors – who spend their days with the students and can validate their leadership, character and civics interest to make a qualified candidate for your youth program. And most importantly, Brejcha stressed, do not talk about American Legion Boys State without Auxiliary Girls State. Be a recruiter, and sell the value, for both programs.

Go right to the parents. When students receive a piece of paper touting an American Legion youth program, it may get thrown away or never reach their parents because the students oftentimes “don’t see the value in it (the program). But parents do, as well as the opportunity it provides,” stressed Brejcha. So when you receive your list of potential students for your programs, send a letter directly to the parents stating their child has been nominated and share details about the program.

Through American Legion youth programs, “you’re not only reaching out to a child, but you’re reaching out to the teachers who are seeing that you’re giving these kids opportunities,” Brejcha said. “We are still serving and showing what we can do for you.”