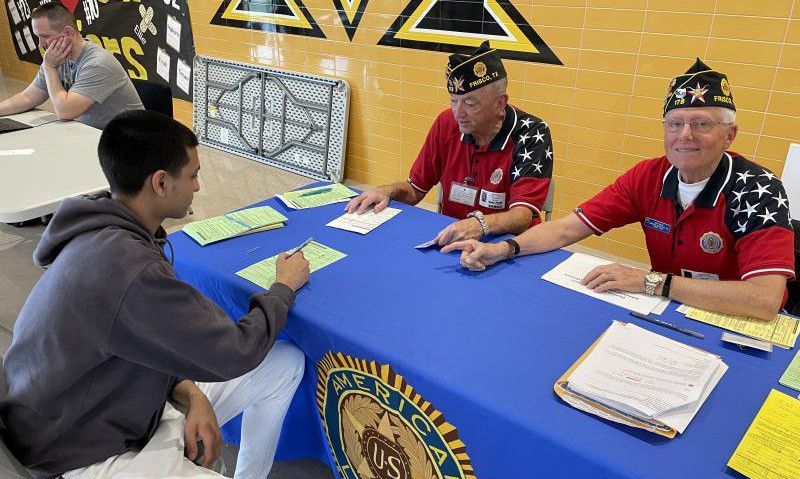 Members of American Legion Peter J. Courcy Post 178 in Frisco, Texas, are upholding their commitment to “foster and perpetuate a 100% Americanism” among today’s youth through active involvement and support of Americanism programs. One of those programs is voter registration.

Recently, Post 178 members David Break and Marty Martel registered eligible student voters at the local Memorial High School. They set up a table inside the cafeteria for two hours during lunch to answer questions and help students fill out the registration form. Thanks to their efforts, eight students are now registered voters.

“It’s a great opportunity to get the students signed up and enable them to vote,” said Ed Reed, Post 178 vice commander-public relations, adding that it’s a fairly quick process to fill out the registration form.

The post receives requests from the more than 10 high schools in the Frisco Independent School District to provide voter registration opportunities to students. This is because of the relationship the post has with the school district.

The Frisco Independent School District “are great supporters of our organization, and we maintain our relationship through our Americanism programs,” Reed said.

Post 178, which was chartered in 2014 and has over 600 members, sends between 15-25 high school seniors to Texas American Legion Boys State. Last year, one of their Boys State delegates was one of only two selected to represent Texas at American Legion Boys Nation in Washington, D.C. “That was a great accomplishment for our (Post 178’s) Boys State program,” Reed said.

Post 178 sends the large number of students to Boys State because of the number of high schools in the district and is afforded the opportunity because of the great financial support from generous and longtime donors.

The oratorical contest is another Americanism program the post supports and this year its winner, Emma Ko, advanced to the department-level contest and placed first runner-up. The effort to promote Americanism and support youth “is one of the reasons we (The American Legion) are here,” Reed said, “so we really devote a lot of time and effort to all of our programs.”

The Frisco Independent School District started a Navy National Defense Cadet Corps last year and has invited Post 178 to support its efforts. A ceremony for the cadets was recently held where the post presented an American Legion Scholastic Excellence Award to a cadet who will be attending the U.S. Military Academy at West Point. As Post 178 continues to develop a relationship with the Navy National Defense Cadet Corps, “we want to be in a position to help them and provide opportunities for their cadets to participate with us.”