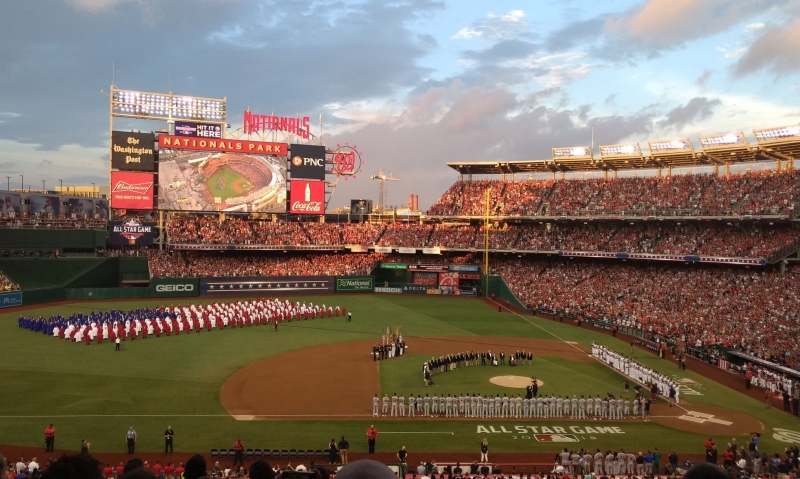 Considering the strong connection between the military and Major League Baseball (MLB) at MLB All-Star Week, it was only appropriate that former American Legion Baseball players took center stage in Washington, D.C.

The third baseman helped hand an 8-6 extra-inning victory to the American League and the team’s manager AJ Hinch, who played Legion Baseball for Midwest City Post 170 in Oklahoma.

Two other former American Legion players, both from the hometown Washington Nationals, also headlined the event.

For the second straight year, Max Scherzer, formerly of Legion Baseball Creve Coeur Post 397 in Missouri, got the start on the mound for the National League. The right-hander led all pitchers with four strikeouts in the contest.

Fan-favorite Bryce Harper, who played Legion Baseball out of his hometown of Las Vegas, won a thrilling Home Run Derby in walk-off fashion to the enjoyment of his team’s supporters in attendance. The record-setting event featured 221 home runs, including six from Harper in the final 29 seconds of the final round. Harper defeated seven foes, including Bregman, who just came a few feet short of a tying homer in his first matchup.

Jacob deGrom of Florida and Brad Hand of Minnesota both got work out of the National League bullpen, while Justin Verlander of Virginia and Craig Kimbrel of Alabama were both selected to the American League team.

Also included in the week’s festivities was the Futures Game, which was played on July 15 prior to the All-Star Game to showcase upcoming talent.

At the celebrity softball event, Hall of Famer Tim Raines, who played Legion Baseball for Sanford Post 53 in Florida, was one of the event’s headliners.