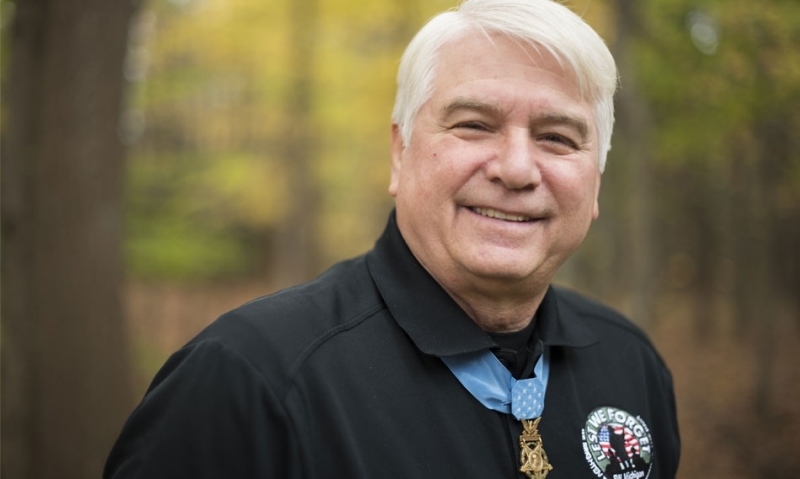 Medal of Honor recipient and Legionnaire James McCloughan threw out the first pitch of the MLB All-Star Game on July 17, 2018.

As former American Legion Baseball players were among the game’s greats participating in the 2018 Major League Baseball All-Star Week events in Washington, D.C., MLB showed tremendous support for the military.

Prior to the start of the All-Star Game on July 17, 30 Medal of Honor recipients were honored on the field in front of a sellout crowd and a national television audience. Five of the recipients have notable connections to American Legion Baseball.

The first pitch was thrown out by Medal of Honor recipient James McCloughan, a 35-year Legion Baseball coach, a 24-year member of American Legion Post 49 in South Haven, Mich., and Post 49's second vice commander. Prior to McCloughan’s moment, the Medal of Honor recipient names were read and the heroes received thunderous applause from a grateful crowd as the collection of All-Stars rushed to meet them.

Four of the Medal of Honor recipients recognized have been honored guests at the American Legion World Series in Shelby, N.C.

Donald “Doc” Ballard was a guest in Shelby last year before addressing The American Legion's national convention in Reno, Nev.

Shelby’s 2016 guest, James A. Taylor, was an American Legion Baseball player for Arcata, Calif., Post 274 before entering the service. He is now a lifetime member of Post 274 and uses his medal to inspire young people.

Michael J. Fitzmaurice was an honored guest of the 2015 American Legion World Series and the Legionnaire’s name adorns a South Dakota veterans home with capacity for 100 veterans.

“Bringing in Medal of Honor recipients each year to Shelby is so important,” said Daniel Dellinger, past national commander of The American Legion, who attended the week’s festivities with American Legion Baseball national staff. “It gives the players something to look up to. Those gentlemen who are the recipients of the Medal of Honor are important role models and this year, with James McCloughan coming in with experience with American Legion Baseball, I think is just phenomenal.”

The All-Star pregame ceremony was just part of an overwhelming tribute to military over the course of the week. The week started with the first-ever Armed Services Classic, a softball tournament featuring all five branches. The Air Force took a 9-2 victory over the Army in the title game to lift the trophy, but Army Staff Sgt. Jacob Hensal went on to win the Armed Forces Home Run Derby.

Prior to the Home Run Derby on Monday, 45 members of the Air Force District of Washington were told they were going to a watch party, only to find themselves on the field being celebrated by the crowd.

The pregame ceremony also featured the Navy honoring America with a garrison flag in the outfield and a flyover.

During the Home Run Derby, over $1 million was raised for military charities in an event won by American Legion Baseball alum Bryce Harper, who was decked out in American flag attire with his American flag bat.

The All-Star Game pre-game reception was hosted at the Navy Yard and pregame festivities included another flyover.

During the All-Star Game, Air Force Sgt. Cole Condiff was reunited with his surprised pregnant wife and daughter for the first time in six months.

“Baseball helps create leadership qualities and what Major League Baseball is doing here is just fantastic,” Dellinger said. “It is a great opportunity to work with Major League Baseball as we continue to push our children and youth programs, with baseball, and hopefully here soon, softball. Whatever we can do to engage the young men and women in bat and ball sports.”

“It has just been a phenomenal week,” Dellinger continued. “Major League Baseball has done everything possible to highlight the military and it is great.”