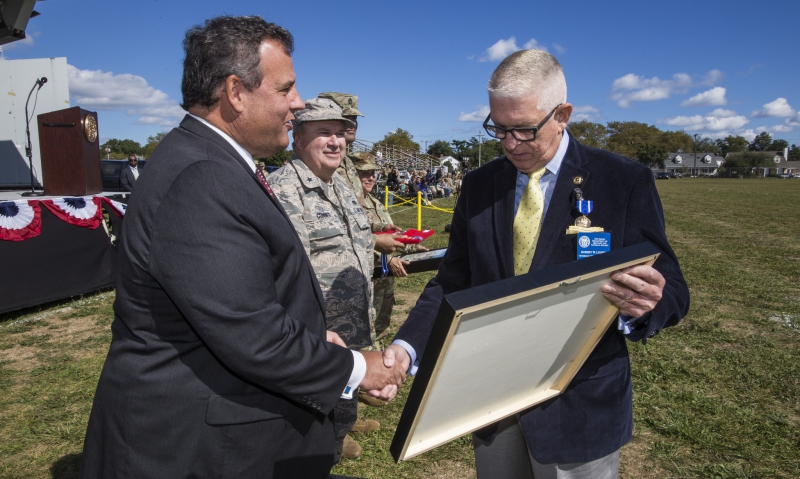 Department of New Jersey Legionnaire Bob Looby is well-known in his home state for his efforts in veterans employment, education and homelessness. Those efforts recently were acknowledged through two prestigious awards presented to Looby.

At its Nov. 1 Northern NJ ROTC Muster and Awards Ceremony, the Association of the United States Army presented Looby with its Distinguished Service Award. The award was given to Looby by First Region AUSA President Dennis J. Dougherty for Looby’s “dedicated work and advocacy on behalf all the veterans of the Garden State.” Looby also was praised for being the “No. 1 veterans advocate for New Jersey”."

"Bob was recognized for all his great work and outreach to soldiers and veterans through out our state, in particular for his outreach with job fairs for veterans of all our are services, and his work with homelessness in our veterans community," Dougherty said. "He is also a great supporter of Amry ROTC at Rutgers University."

Looby, the Department of New Jersey’s Employment and Education chairman, takes a wide-ranging approach to assisting veterans in his state. “My mission is to do everything that (American Legion National Headquarters) does: employment, homelessness and education,” he said. “I don’t do this for awards. It’s almost like I’ve found my mission in life."

And in October, Looby became a two-time recipient of the New Jersey Meritorious Service Medal for his efforts in veterans employment and homelessness, and initiatives that help recently incarcerated veterans re-establish themselves in the community.

The award was presented during Gov. Chris Christie’s annual New Jersey National Guard Military Review. “All the National Guard is there,” Looby said. “It’s almost like it’s in front of your peers. It’s a wonderful feeling.”

Looby said his advocacy is his responsibility as a Legionnaire. “We put the cap on,” he said. “We pay our dues. Do what you signed up for.”

Getting the awards “is not a confirmation of what we’ve done,” Looby said, “but that others know what we’re still doing. It’s not what you did yesterday. It’s what you’re going to do for our veterans tomorrow.”