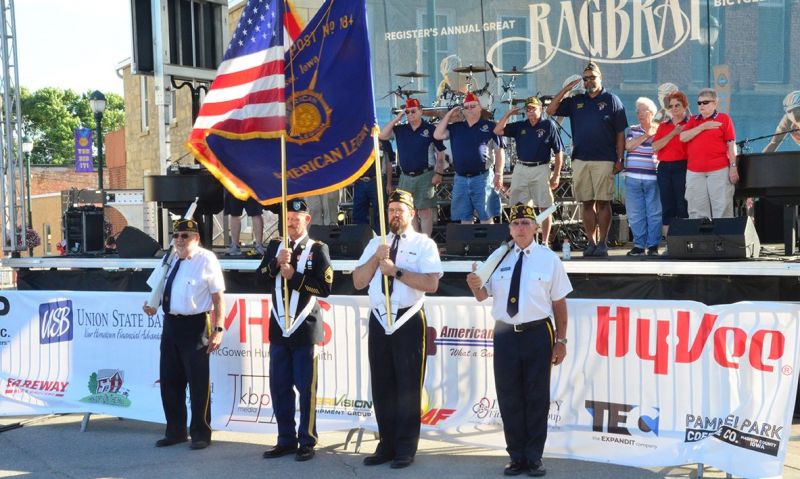 Iowa Legionnaire Carl Anderson was able to combine his love for The American Legion with his love for cycling. His efforts got the Legion’s 100th anniversary recognized during the world’s oldest, largest and longest recreational bicycle touring event.

Iowa’s immediate past Eighth District commander, Anderson has been participating in the Register's Annual Great Bicycle Ride Across Iowa (RAGBRAI) for the past few years and serves as an ambassador for the event. This year he decided to put together an American Legion team for the ride – complete with American Legion Centennial jerseys – and also was able to get RAGBRAI to set aside Day 2 of the seven-day, 447-mile ride to honor the Legion.

Anderson, a member of Severson Post 77 in Kanawha, originally got into bicycling when his daughter asked him to participate in RAGBRAI as a father-daughter ride. Over 300 pounds at the time, Anderson lost weight, got the equipment he needed and began riding.

Cycling also became therapeutic for him – and it’s something Anderson would like other veterans to try at the urging of The American Legion. “It’s my way of relaxing and getting rid of stress,” he said. “We need to maybe thinking of alternative treatments, instead of pills, for helping veterans. We could use (cycling) as a get-together to discuss issues. It’s really something I think The American Legion could do. It takes a spark. If there’s enough people interested, it may start off small but turn out big in the long run.”

Celebrating 100 Years of The American Legion Day was July 22 in Winterset; that evening, national, department and local American Legion leaders were honored on stage in front of a large crowd in the city’s downtown.

American Legion Past National Commander Dave Rehbein spent his time on stage explaining The American Legion’s Four Pillars. “We’re out of the uniform. Now we serve in civilian life,” he said, asking those in attendance to remember U.S. servicemembers once they leave the military. “When those folks come home, some of them bring problems with them. We have to be there for them.”

Rehbein, a life member of American Legion Post 37 in Ames, Iowa, and chairman of The American Legion 100th Anniversary Observance Committee, said getting in front of the RAGBRAI crowd – which includes 10,000 cyclists daily – was a big accomplishment.

“I think we need to take advantage of any of these kinds of opportunities in the best way possible,” Rehbein said. “Every time that we can step forward and present the image and the purposes of The American Legion, that’s a good thing. And when you can do it for a crowd, most of whom know nothing about The American Legion, that makes it even better. I think it’s very valuable.”

Newly elected Department of Iowa Commander James Kessler said he hoped the opportunity with RAGBRAI “will bring it out to the people in a broader sense what we are, who we are and what we do. That we serve out veterans and make sure they’re taken care of. That we care about the community. We care about the youth.”

RAGBRAI Director T.J. Juskiewicz said honoring the Legion was an easy choice. “(Legionnaires) have been serving our country and then serving our communities for 100 years,” he said. “RAGBRAI travels into the town where there are Legion posts every year. It was just to draw some attention to that they’ve been doing some great service for 100 years. We felt it was a perfect year to do it.”

Green Rogers Post 184, located just two blocks from where the American Legion Day ceremony took place, used the event to raise both awareness and funds, selling loose-meat sandwiches to hungry bicyclists and others visiting the various vendors lining the downtown streets. A booth also was set up outside to provide any veterans with benefits information and prospective members with the opportunity to join The American Legion. Patches designating the day set aside to honor the Legion also were handed out to ride participants.

Finance Officer Joan Naylor, a Paid-Up-For-Life member who retired after a combined 21 years in the Navy and Air Force, said the post purchased 300 pounds of meat and had cooked up half of that already by mid-afternoon.

“Originally we weren’t going to start serving until 3 o’clock, but we had people starting to come in around 12. So we just started serving as they came in,” said Naylor, who helped cook the meal. “This is kind of a fundraiser for us, because we’ve got some repairs we’ve got to make to the post.”

Naylor appreciated the fact RAGBRAI recognized The American Legion, as did Post 184 Commander Diogenes Ayala, who served as RAGBRAI’s public safety chairman for Winterset. He was responsible for logistics involving law enforcement, medical transportation and communication.

“We’re honored by this,” Ayala said. “We’re lucky to have our Legion hall being (in the overnight town). But we’re representing all of the Legion, not just the Winterset Green Rogers Post.”

Starting out in Council Bluffs, Iowa, this year’s RAGBRAI traversed Northern Iowa, going through anywhere from three to 10 small towns and cities each day. American Legion posts in some of those areas came out to support both the ride and the Legionnaires taking part in the ride.

On Day 1 of the ride it passed through Avoca, where Fred Funston Post 227 members were there to sell beverages from the post, which was in the heart of the vendor area. Post Commander Scott Haig, who retired from the U.S. Army in 2004, said his post serves a sort of community center for the town and was hoping to raise some funds during the RAGBRAI stop. “That’s going to go back hopefully to improve the building a little bit … and that’s going to support the youth organizations in town,” he said. “Almost all of funding that we bring in … goes back into the community one way or another.”

Along the main drag in Earlham, American Legion Post 158 had a table set up to hand out protein bars and other snacks, water and Gatorade directly in front of the post. Post 158 Adjutant Crystal Wright, who also serves as Sixth District vice commander and executive director of the Department of Iowa American Legion Auxiliary, was born and raised in Iowa and knows just how big RAGBRAI is – as well as what it meant for the Legion to have a strong presence with the ride.

“It’s just showing that we’re out there and we’re attempting to make ourselves known,” said Wright, who served in the Army from 1998-2001. “I think it shows huge respect for our cause, which is supporting veterans.”

The American Legion Auxiliary unit of Post 419, located in the heart of downtown Dexter, sold loose-meat sandwiches and drinks, while the post was selling beverages. Unit 419 President Judy Neal said having a presence along the route was a chance “to let people know what we do as an organization to support veterans and (active-duty) military. Someone has to think of them and ensure they are not forgotten.”

Neal’s two children, Mason and Alison, both were riding this year’s RAGBRAI, while her husband Steven – Post 419’s adjutant – previously participated in the ride 14 times. “This really ought to put our name out there for 10,000-20,000 people to see,” Steven said. “That’s worth quite a bit. And having the team – that’s a large part of the visibility.”

Haig echoed that statement. “I think the biggest concern we’ve got right now – as probably all veterans organizations have – is the young veterans don’t understand if they don’t have people to lobby (for) their benefits, they’re going to lose their benefits,” he said. “The reach out to those younger veterans – if they see a RAGBRAI team running (representing) The American Legion, that’s going to draw those people in also.”

Rehbein said having a team this year sends the message of opportunity for future Legion participating in RAGBRAI. “We’ll be looking for more people that are willing to be publicly identified as members of the American Legion Family,” he said, before praising Anderson for his ability to organize a team and bring The American Legion and RAGBRAI together.

“Carl is the kind of Legionnaire that we need more of: somebody that has … an idea, takes the initiative to try to make that idea come into reality,” Rehbein said. “Too often we have people that have an idea, but somebody else has to make it come into reality. We’ll recognize Carl for this. We really will.”

RAGRAI wraps up July 27. That’s when Anderson will consider his district commander responsibilities finished. “Technically, my year as district commander is done,” he said. “But to me, it’s not done until this ride is over. It will end it on a good note.”