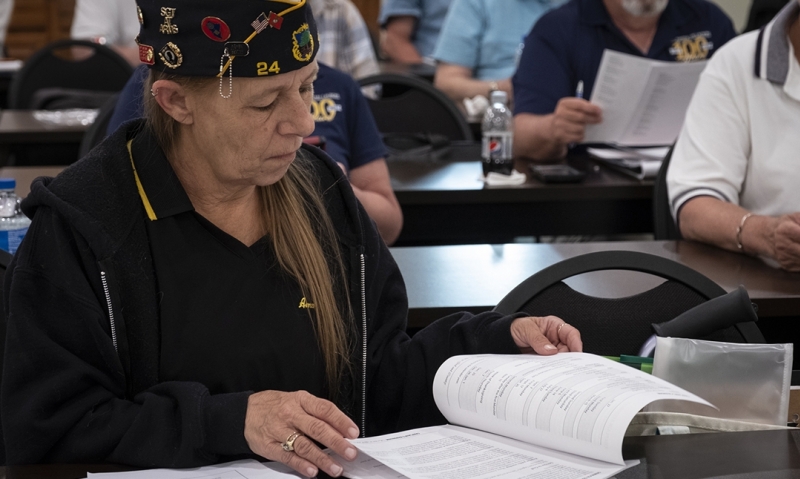 Matthew Jabaut greeted a class of 20 Department of Maine Legionnaires with a simple question, “Did you bring your homework?”

It was a reference to May when the department’s Legion College met for the first of the three-phase program. After the first session, students were expected to return to their posts and apply those lessons.

“Brunswick is a small post but we’re focused on the Legion Family,” said Carl Curtis of Post 20. “We’ve started up the Auxiliary. On Monday night, we’re starting our Riders chapter with six members. That will grow because other people have come to me and wanted to join but I need to check their backgrounds. We’re growing and expanding our family so we can get more into our community. That’s our vision.”

Other students chimed in, sharing stories of membership, community involvement and more. The class, which met for the intermediate section at department headquarters in Winslow on July 21-22, is an interactive program designed to educate leaders at the post and district level.

Department Adjutant Paul L'Heureux conceived the idea for Maine’s Legion College when he went to National Legion College in 2001. “At the time, I thought it would make a difference,” he said. “At that time, it was not well received but I was determined to change that.”

“With our new department headquarters, the training classroom and technology, we thought we had the right direction,” L'Heureux said. “So we worked with national, developed the criteria and now we’ve doubled the size of our class since the first one.”

Jabaut and Hall, the department judge advocate, led the majority of the two-day sessions that were highly interactive.

“Even though they both work full-time jobs, they have what it takes to make a difference — and that’s a passion for the Legion,” L'Heureux says. “That part was pretty easy. We just needed to get it flowing.”

American Legion Past National Commander Tony Jordan raved about the involvement of younger veterans. In 1979, Jordan became the first Vietnam veteran to be elected department commander of Maine.

“Legion College prepares our people for holding offices within The American Legion, whether it is a post commander, district commander or something else,” Jordan said. “We have some of the most dedicated men and women. This class is amazing; the participation is amazing.”

Jordan has seen the evolution of Legion training. When he was coming up through the ranks, training was completed by books and a form to be mailed in.

“Now, they take it back to their local posts, their local communities, and put it to use,” he said. “It’s a total commitment. It prepares our officers. They get very involved. You are as good as your instructors and we have some excellent instructors. Matt and Jason are very knowledgeable.”

The idea behind the three-tiered approach is to get the students to apply the lessons they learned, then return for a deeper dive. “We broke it up into modules so that we could get the core principles in place, the core aspects of the Legion programs, the basic media relations, membership — the core stuff that they need and can take back with them and apply at their posts,” Jabaut said.

The initial class kicks off with a discussion about the Basic Training module (formerly American Legion Extension Institute), which is a prerequisite for the students. The first phase also addresses post composition and leadership qualities. During the second session, class discussions focused on post operations, post officers, budget and fundraising, Legion history, the Legion Family and more.

Curtis, who is a department service officer, gave a presentation on service officer work, responsibilities and what post leaders need to understand about helping veterans find help for their claims and benefits.

His presentation was among the key takeaways for Josefine Eltzroth, commander of Post 202 in Topsham. Eltzroth plans to pair her post service officer with the first vice commander, who handles membership. “That’s a perfect combination, which we have not done in the past,” she said. “That is something I will definitely take back.”

Eltzroth is grateful for the training opportunity and looks forward to the final session later this year.

“I enjoy the camaraderie,” she said. “I enjoy learning. It’s very valuable for me to hear what other post officers have to say and how they run their posts.”

Tricia Thurston, the department chaplain and a member of Post 24 in Rumford, was among those who brought lessons from the first session back to her post. She liked the way that the three-tiered sessions create accountability for the students.