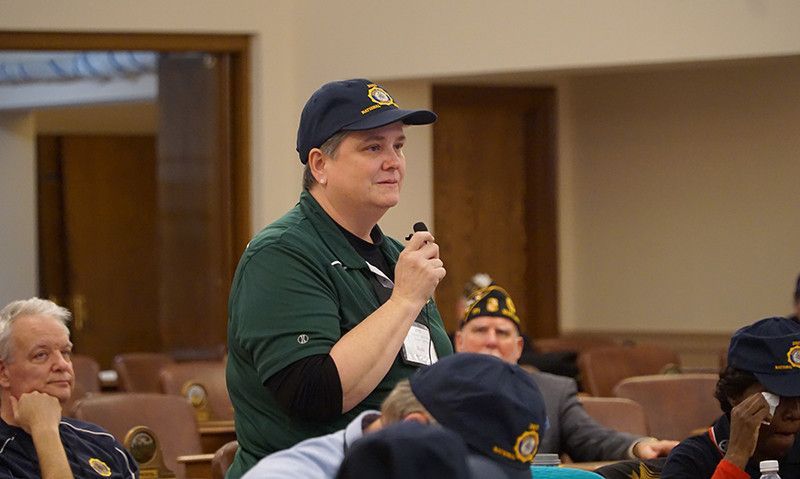 Social distancing mandates last year during the COVID-19 pandemic created membership recruiting challenges for many American Legion posts. Faced with this challenge, the Eugene C. Yount Post 145 in Peoria, Ariz., utilized a membership tool that put them in direct contact with potential post members – the Direct Membership Solicitation (DMS) program. As a result, Post 145 grew membership from 127 to 400 members.

With The American Legion’s DMS program – a national recruiting program that has brought in four million members since 1982 – Post 145 took a different approach than just calling DMS members and telling them why they should transfer into their local Post 145. “We used the DMS program as a Buddy Check,” said Roberta Kimelton, Arizona District 11 commander and a chartering member of Post 145 who is attending the 2021 National Legion College in Indianapolis.

While speaking with DMS members, “We said, ’We understand you’re a veteran in the area, is there anything that we can do for you? We’re American Legion Post 145 (gave location) and we’re just calling to check in and see how you’re doing.’”

About 15 members of Post 145 make monthly Buddy Check calls on members and veterans in the community. One Buddy Check resulted in a Post 145 member calling an ambulance to check on a veteran who was having a medical issue; other conversations are around transportation, health care and food needs, as well as assistance from a veteran service officer.

“We’ve really worked to encourage people to focus not on give me your dues and get a member, but here is what we can do for you. And it’s worked,” Kimelton said.

Through DMS, American Legion posts are encouraged to reach out and transfer members into the local post for active engagement.

“You have members waiting to be engaged. Contact them, engage them, bring them in to your post,” said Matt Herndon, director of The American Legion Internal Affairs Division, during his DMS presentation Monday morning to the 2021 National Legion College class. “Show them the value (of transferring to a local post). What is the big selling point? Your dues stay local. Your dues stay local to support programs within the post and community.”

American Legion post adjutants and commanders have access to DMS members in MyLegion.org. DMS members are in the “Find Members in my Area” report located in Reports/Labels on the left-hand navigation menu. Create the report by entering a ZIP code (or multiple ZIP codes) and last paid year, then select “View Report.”  The report provides contact information, including member ID, name, address, phone number, email, war era, and more.

Legion College student Jeffrey Jewell of Vacaville, Calif., and a Paid Up for Life member, shared that his Rago-Christopher Post 165 uses DMS as a recruiting tool. The post mails letters to DMS members that tell the members what the local Post 165 is doing for veterans, their families and the community, then offers the DMS member to sign and be transferred into Post 165. “It’s a great tool,” he said.

Matt Jabaut, Legion College facilitator and the alternate National Executive Committeeman for the Department of Maine, shared with the students that the department uses DMS as a way to leverage what they can’t control – Legionnaires passing on to Post Everlasting. “We can’t control how long people live, but we can control how much we go out and engage,” Jabaut said. “If you lost five post members last year (to Post Everlasting), go into your DMS and rebuild. It’s not cold calling. They are looking for you to call them and engage. Don’t hesitate to call and really use the DMS to help provide that gap.”

Herndon reminded the students about National Commander Paul E. Dillard’s engagement initiative to contact expired members and bring them back into the organization, which includes DMS expires. Legionnaires are encouraged to reach out to 2020 members and offer them the ability to continue their continuous years of membership – despite not renewing in 2021 – if they renew for the 2022 membership year. For example, if an expired 2020 member had five continuous years prior to letting their membership lapse, and they were to pay for the 2022 membership year, their continuous years would be six years. Learn more here.