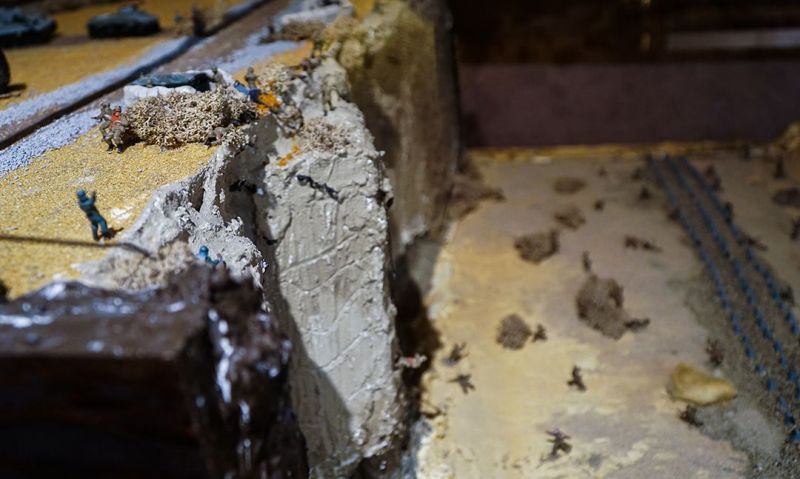 Battling on the cliffs above Omaha Beach, as interpreted by David Shackelford. (Photo by Laura Edwards/The American Legion)

During the 101st American Legion National Convention in Indianapolis in late August, one of the tour opportunities is a shuttle (price $15 on-site) from the Indiana Convention Center to the Legion’s National Headquarters building at 700 N. Pennsylvania St. There is Legion history on every floor, but the fourth floor has the most. In addition to the National Executive Committee room and the Library & Archives, the Emil A. Blackmore Museum spans two large rooms across the hall from each other upon turning left from the elevators. Among the many things to see in those rooms are:

In the right-hand fine art gallery, a full-length and almost life-size oil portrait of Harry Truman, the first Legionnaire president. Painted by Rev. George Leonard Shultz, it was commissioned by the Department of Missouri (Truman’s home state) for $5,000, just over half of which came from post and member contributions. It made its debut at the 1949 national convention in Philadelphia, at which Truman spoke. According to archival records, “With the White House under renovation, President Truman posed for this painting at his temporary residence and office, Blair House …. The overcoat and helmet on the chair to President Truman’s right are from Truman’s service as an artillery officer during the First World War.” He is holding his Legion cap.

In the left-hand museum, three dioramas illustrate D-Day, and scenes from World War I and the Vietnam War, in amazing detail. (Down to tiny red bloodstains.) The first was constructed in 1971, and the other two in 1972 and 1978. Then-National Librarian/Curator Tom Hull commissioned them from David Shackelford, who was a senior at Indiana University-Purdue University Indianapolis in 1971. The soldiers are hand-painted, and the scale is 1 inch for 6 feet.

Learn more about the museum, and take a virtual tour, here.