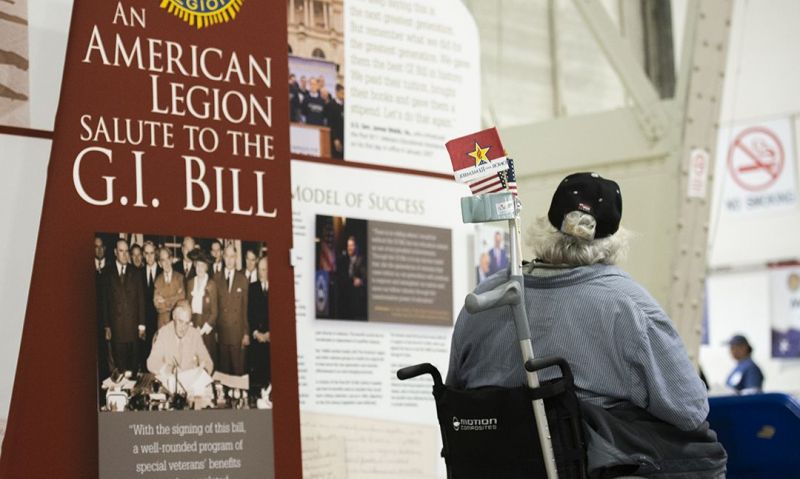 For American Legion Department of Oklahoma Adjutant Carl Kuykendall, using the GI Bill didn’t just provide an education. It helped him deal with the things he saw during his service in the U.S. Army in Baghdad.

The year before he retired from the military, Kuykendall worked in the emergency room as a practical nurse/medical specialist. He was assigned to the 31st Combat Support Hospital in Iraq from January to September of 2004 “and was exposed to horrific trauma on a daily basis while there,” he said. “The thoughts and memories of those days and nights in our Baghdad E.R. were on constant playback in my brain over the next few years. I knew something wasn't right with my brain. I couldn't seem to climb out of the cloud of darkness I was in. I continued to work and function normally, but avoided hospitals and especially working in hospitals.”

Kuykendall sought help from the Department of Veterans Affairs and was diagnosed with severe depression. “Knowing that the effect of my year in Iraq would stay with me forever, I decided I needed to fix this problem myself,” he said. “I thought long and hard on how to reprogram my brain. I didn't want constant playback of my experiences with horrific trauma to clutter my brain and bring me down all the time.”

Kuykendall turned to the GI Bill – which turns 75 years old on June 22 and was originally drafted by American Legion Past National Commander Harry Colmery – and was able to, in his words, “reprogram my brain. My idea was to return to school and learn the coding language used to allow websites to exist on the internet.

“School lasted for over three years. There were many nights that I worked countless hours with html, CSS, JavaScript and numerous other website languages in order to be prepared for school the next day. I knew that at the same time that I worked with that coding language, I was also repairing my clustered brain. Many nights of homework and many nights helping me reprogram my brain.”

Kuykendall said he was “very fortunate to have the 9/11 GI Bill. The GI Bill made it possible for me to attend college and finish a bachelor's degree in the studies of Media Arts with emphasis on Web Design. Having a degree would soon open many opportunities for me.”

Kuykendall’s story is one of many positive stories that came from using the GI Bill. Here are just a few others.

• Air Force veteran Virginia Russell went to college on the GI Bill and graduated in May 1987 with an accounting degree. A single mother of three, she went to work for the Internal Revenue Service in July of 1987 and worked there for 28 years before retiring in 2015. “I never would have been able to go back to college and support my children without the GI Bill,” said Russell.

• Past Department of Massachusetts Commander and National Executive Committeeman Frank MacDonald retired from a military career that included the Navy, National Guard and Army reserve as a command sergeant major. MacDonald didn’t limit his usage of his GI Bill benefits to an education, though he did get that – one he calls “second to none.” But in addition to that, “my homes have been financed through the VA Home Loan Program, my health care is primarily provided by the local VA outpatient clinic, and I retired from what I consider to be a lucrative career with the federal government – a career that began with an appointment under the Vietnam Veterans Readjustment Act. So I guess all in all the GI Bill has made me the person I am today.”

• U.S. Navy veteran John Thomas served in the Vietnam War and then earned a degree in business administration from the University of Wisconsin-Whitewater. “If not for the GI Bill, I probably would not have enough funds to accomplish this,” said Thomas.

• Twitter user Cain A (@Nakoaokekai) used the GI Bill to earn associate’s and bachelor’s degrees, which helped him get a “good federal job, as most good federal jobs require a degree nowadays to stay competitive. Once tuition assistance is up every veteran should use and take full advantage of the GI Bill benefits.”

• Facebook user Bill Risener: “I used every bit of mine. It pays off daily. Wouldn't be where I am today without it.”

• Facebook user Bill Howlett: “Thank you FDR! BA in History in 3 yrs after Nam. Couldn’t have done it without the GI Bill!”

• Facebook user Edward Sullivan: “It allowed me to go to Palmer College of Chiropractic and covered my four years of professional training. In August I will be at Palmer in Davenport, Iowa, celebrating my 50th year in practice with my class of 1969!”