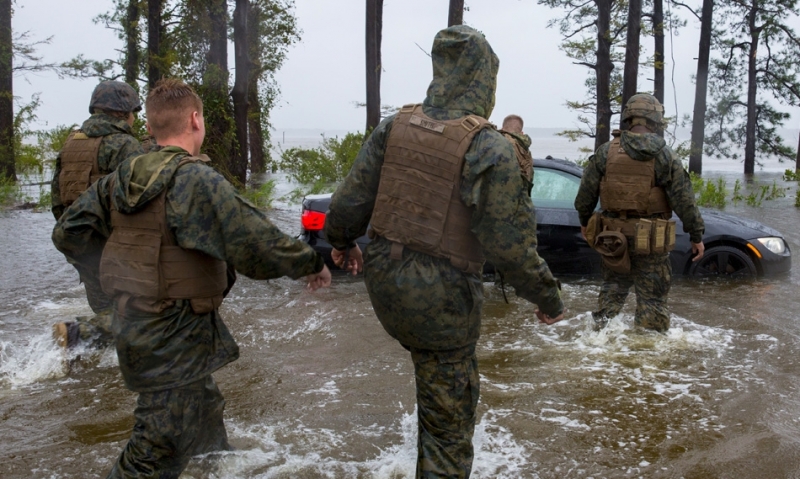 Hurricane Florence has resulted in heavy rain, massive flooding and devastation in North and South Carolina since it made landfall on the East Coast on Sept. 14.

As support is needed for hurricane victims, as well as soldiers and first responders deployed to aid in evacuations and clean-up efforts, American Legion posts have opened their doors to serve as donation centers, shelters and sources of encouragement.

American Legion Post 34 in Rock Hill, S.C., created hurricane relief kits for the more than 370 soldiers of the 178th Combat Engineer Battalion of the South Carolina National Guard who have been mobilized to provide hurricane relief efforts. The post asked for and received donations of canned and packaged food, bottled water, hygiene products and more last weekend and then sent it to the National Guard Armory, where it was sorted and put into kits by local volunteers. And during the hurricane, Post 34 stayed open to "let people know that if need be there was a place to go and people to help. We had several people from Charleston (S.C.) here and other places also," said Post 34 Commander Tommy Ayers. "As a post we would like everyone to know we are here for the community and, most importantly, our veterans."

American Legion Post 24 in Blytheville, Ark., is working with the county schools to have students in elementary through high school write cards for Hurricane Florence victims. It's a way to "give out good vibes and positive thoughts and let the victims know that we are still here for them. That we know what's going on and just want to make them smile," said Post 24 Commander Jason Petrous.

When Petrous announced that Post 24 wanted to have cards written for the storm victims, he said the community "jumped all over this idea" and the mayor and other local leaders provided contact information for each school. Petrous is working with a local Red Cross representative to get addresses to Red Cross shelters in the Carolinas, which the cards will be mailed to by the end of the month.

Other posts that provided support include Post 167 in Hampstead, N.C., which served as a command center for fire departments, EMTs and scuba divers. And Michigan Legionnaire Larry Nix traveled to Durham, N.C., as a Red Cross volunteer. This is his fourth disaster relief; he helped out with Hurricane Irma and Harvey last year in Houston. "Being a military veteran I've always wanted to give back," said Nix, a member of Post 20 in Pontiac, Mich. "I enjoy what I do."

For American Legion post NEF grants, posts must state why they will cease to perform their duties and activities in the community due to losses sustained. Legion posts that served as community service centers during the disaster may also be eligible for a grant to offset their costs in providing food and other services to members of their community during these disasters.

Since Jan. 1, 2018, the NEF has provided more than $166,000 in grants. These grants are made possible by donations to the fund. To donate, visit www.legion.org/donate.

Additionally, The American Legion's Temporary Financial Assistance (TFA) program is available to help meet the basic needs of minor children of eligible veterans. These needs include shelter, food, utilities, clothing and health expenses. TFA grants are available to children (17 years or younger) of active-duty servicemembers or American Legion members. No child can be considered eligible until a complete investigation is conducted at the post or department level, a legitimate family need is determined, and all other available assistance resources have been utilized or exhausted.