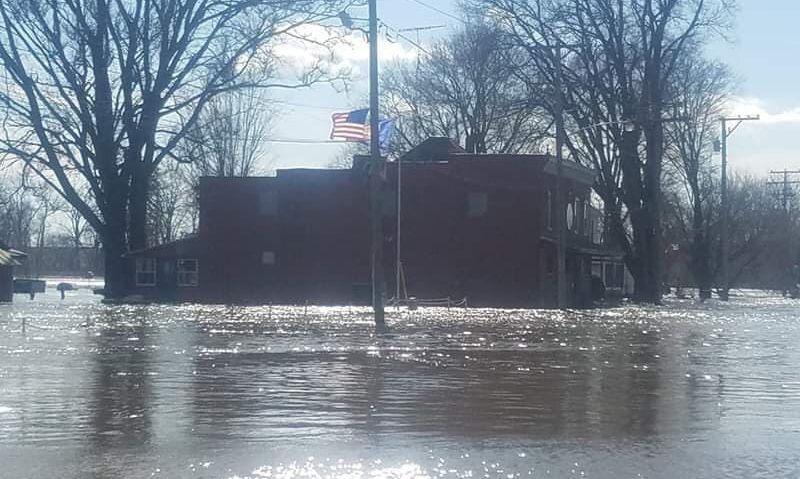 Current photo of Post 1225 in McConnell, Ill., affected by the flooding.

As the devastation from this past weekend’s Midwest flooding comes into focus, The American Legion’s National Emergency Fund (NEF) stands ready to assist eligible members.

Flooding has been the most severe in eastern Nebraska and western Iowa, where at least three people have been killed. Rivers have soared to record levels, inundating levees, bridges and roads. States of emergency have been issued in communities in Nebraska, Iowa and Wisconsin.

NEF grants provide immediate financial assistance for American Legion and Sons of The American Legion members who have been affected by the natural disaster. Legion posts also qualify. The NEF provides up to $3,000 for Legion and SAL members with an active membership who have been displaced due to damages to their primary residence, and up to $10,000 for posts that have been damaged by a natural disaster and whose programs and activities within the community are impacted.

To apply for an NEF grant or to learn more, please visit www.legion.org/nef.

In Kansas, American Legion Post 61 in Wathena launched preparations this past weekend in case flooding created issues for the town. "Right now, it does not look like the river’s crest will hit flood stage," said post sergeant-at-arms Duston Hansen. “If everything holds, we’ll be OK.”

The post is prepared to serve as a shelter or a storage facility, if the need arises. More importantly, members have been spreading the word throughout the community and creating a response plan, especially for older veterans who don’t have nearby family.

“We’ve been visiting these veterans to see what they need,” Hansen said. “Then we, The American Legion, set up a plan so that, if needed, we can get the older veterans removed from their homes and to safety. A lot of these folks, if they are not in a veterans service organization, get lost in the cracks.”

Donations to NEF are needed in order to provide funding for this and future natural disasters. To make a donation to NEF, please visit www.legion.org/donate.