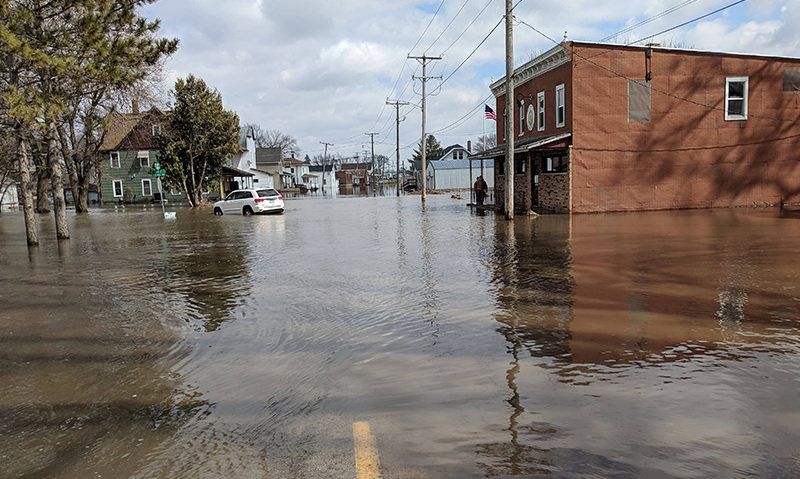 Photo of Post 1225 in McConnell, Ill., affected by the flooding.

American Legion departments and posts in the states impacted by last week’s devastating flooding are working to help those affected.

In Nebraska, Post 32 in Papillion was holding a relief drive Thursday, March 21, where anyone wanting to drop off donated goods could do so, Department of Nebraska Adjutant Dave Salak noted in an email. He also said Post 339 in Bellevue was coordinating with Sam’s Club for donations of water, fruit and toiletries, and with Hy-Vee to provide catered meals to displaced families in the area.

“I have received calls from Legionnaires as far away as New Jersey offering to truck in donated goods to help in the relief effort,” Salak said.

While Salak said that as of Thursday morning, the department had no official news of Legionnaires or posts hit by the floods — “We know they are out there but the news hasn’t reached us just yet” — he did confirm that one of the department’s regular membership drives will be impacted by the flooding at Offutt Air Force Base south of Omaha.

With about a third of the base covered in floodwaters and dozens of buildings damaged, the Air Force on Tuesday cancelled the 2019 Defenders of Freedom Open House and Air Show, originally scheduled for June 1-2. Salak said the department sends a delegation to every air show at the base to hand out brochures and flags.

“It is essentially a membership drive usually netting a couple handfuls of new members,” he said.

“NEF applications have been forwarded to all district commanders so that they are ready to assist Legionnaires when called upon,” Salak said.

Meanwhile, in Iowa, Post 492 in Hornick has served as a makeshift food pantry as residents return home after heavy rains and a breached levee on the west fork of the Little Sioux River forced a complete evacuation of the town the week before.

NEF grants provide immediate financial assistance for American Legion and Sons of The American Legion members who have been affected by the natural disaster. Legion posts also qualify. The NEF provides up to $3,000 for Legion and SAL members with an active membership who have been displaced due to damages to their primary residence, and up to $10,000 for posts that have been damaged by a natural disaster and whose programs and activities within the community are impacted.

To apply for an NEF grant or to learn more, please visit www.legion.org/nef.

Donations to NEF are needed in order to provide funding for this and future natural disasters. To make a donation to NEF, please visit www.legion.org/donate.