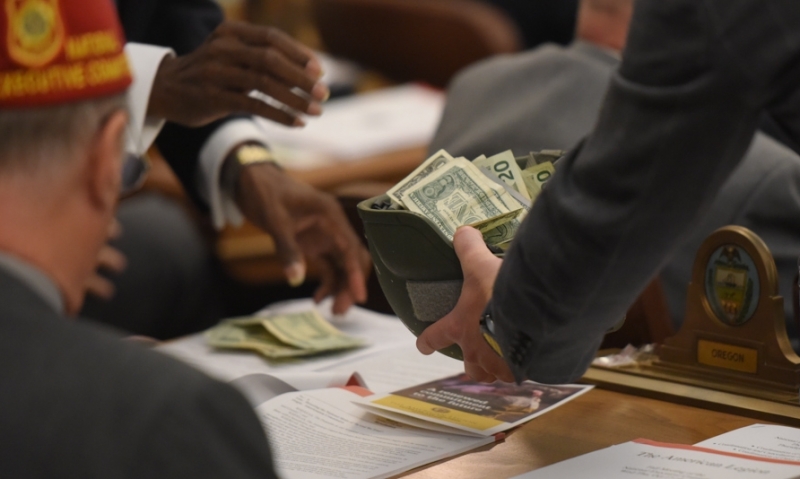 Described as “a renewed commitment to the future,” the American Legion Veterans & Children Foundation was established Wednesday to advance the organization’s continuous efforts to assist disabled veterans and military parents in need for decades to come.

The American Legion’s National Executive Committee approved a move to have the 1925-established American Legion Endowment Fund do business under a name that more accurately reflects its mission and kicked off an immediate drive to refuel its coffers with a $25 million fundraising goal. Tax-deductible contributions to The American Legion Veterans & Children’s Foundation can be made by visiting www.legion.org/donate.

“Consider it as Endowment Fund 2.0 – but with a much more descriptive name,” American Legion National Commander Brett Reistad said in his opening remarks Wednesday. “It will renew our commitment to children by delivering Temporary Financial Assistance to those in need. It will provide expert assistance for service officers to help veterans and their families.”

American Legion Charities, a nonprofit trust fund that directs donations to programs and services of the organization, presented a $500,000 check to the Veterans & Children Foundation Wednesday to get the campaign underway. Following that, hats and helmets were passed across the NEC room, generating another $2,415. The Department of Massachusetts added to the campaign with a$5,000 donation.

Between 2012 and 2016, the Temporary Financial Assistance program awarded $4.2 million in cash grants – an average of over $842,000 per year – to military and veteran families with minor children at home that have encountered unexpected financial crises. Families facing homelessness, hunger or loss of utilities in their homes have been assisted by the fund. In 2017, 933 minor children of 443 veterans received $588,434 in cash grants, including 68 children of 31 veterans whose lives were rocked by hurricanes and floods.

And across the country, more than 3,000 accredited American Legion service officers are continuously working on behalf of some 700,000 veterans and their families at any one time. Service officers provide expert, free-of-charge assistance through the VA benefits process, including appeals, and connect veterans with other benefits and opportunities due to them as veterans of the U.S. Armed Forces.

In recent years, the American Legion Endowment Fund has only been able to cover portions of Temporary Financial Assistance and disabled veterans support needs as the global war on terrorism continues to add years to the longest armed conflict in U.S. history.

The American Legion Endowment Fund was built from a $5 million fundraising campaign in 1924 – $71 million in today’s dollars – conducted by National Commander James A. Drain at a time when American Legion membership was less than half of what is today. The purpose of the fund was twofold, as it will continue to be: to help military and veteran families in need and to provide needed assistance to former servicemembers navigating the complexities of government benefits and opportunities.