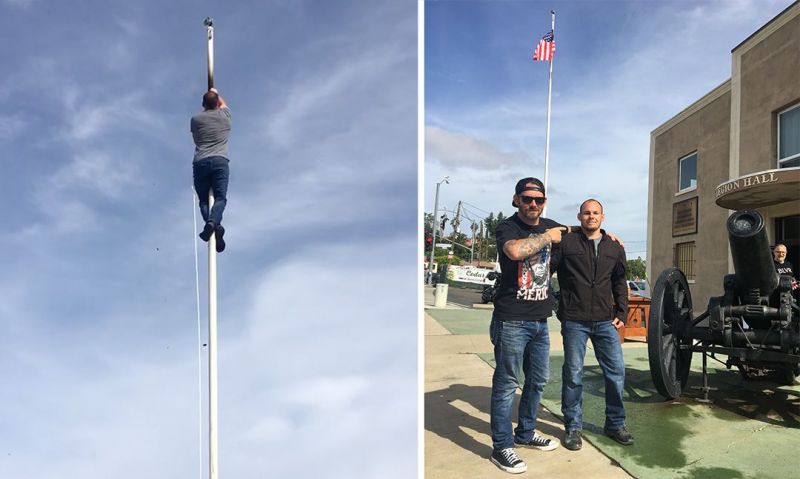 A video shared widely on social media of an American flag being raised in flames awoke Cory Boyd out of bed. Not only was the flag set on fire, it was that of a U.S. flag flown outside a home where veterans who served under it unite – American Legion Post 282 in La Mesa, Calif. That scene resulted in Cory letting his “emotions take over. I decided act.”

He grabbed an extra flag from his home and drove 20 minutes by motorcycle to Post 282 to replace what rioters attacked following a recent peaceful demonstration for Black Lives Matter.

“I felt like somebody needed to show that it’s OK to be proud of that flag, proud to be an American,” Cory said. “I just wanted to show that I was proud.”

Cory has seen the American flag stepped on and burned before, but watching it raised up the 60-foot pole in flames “hit me in a different spot,” he said. So the ride over to Post 282 was filled with self-talk of “you have to do this … you’ve got to get this flag up. It was a passionate thing I had to do.”

Upon his arrival Cory discovered that the pole rope had also burned so he called his brother Derek, a U.S. Marine veteran, and asked him to bring a new one. With a new flag and rope in hand, Cory and Derek tried to get a ladder truck from the fire department but to no avail.

Without hesitation, Cory tied the rope to his belt loop and climbed the pole. And single-handedly re-roped it. “I like to climb," he said.

Cory and Derek stared at the flag after they proudly raised it. Behind them, cheers erupted from volunteers at Post 282 and the La Mesa Police Station, who were cleaning up graffiti and broken windows from the riots. And an officer announced on a loud speaker, “Good job boys getting that flag back up there,” and sirens sounded.

“It was pretty awesome,” Cory said. “It’s the least I can do. These (veterans) risked their lives for us to be able to have the freedoms that we have, and so for me it felt awesome to be able to get that flag back up. I felt joy.”

Cory never served in the military but comes from a family that does, which include grandparents, his brother, cousins and a best friend. “I was raised to be very respectful to the flag, and what the flag stands for," he said.

Derek is honored by what his brother did for the U.S. flag. “He never served, but I’m very proud of him,” Derek said. “He’s a proud American, as we all should be.”

Derek posted a video on his LinkedIn page of Cory climbing the flag pole and replacing the flag. It went viral with 2.5 million views.

The publicity of it all has been a “weird experience” for Cory because “I go to work, I go to the gym, I go home to my family. I’m a homebody.

“I didn’t want it to be about me; I didn’t need the publicity. I did what I came to do, and I got the American flag back up.”

The responses on Derek’s LinkedIn post have been of appreciation to Cory for what he did. So for that, Cory knows that the social media post is showing that “we’ll be able to overcome all of this and I truly feel that.”

American Legion National Commander Bill Oxford is having a certificate of appreciation and a commander’s coin presented to Cory and Derek for their efforts by Post 282 Commander Jack Porath at an upcoming post meeting.