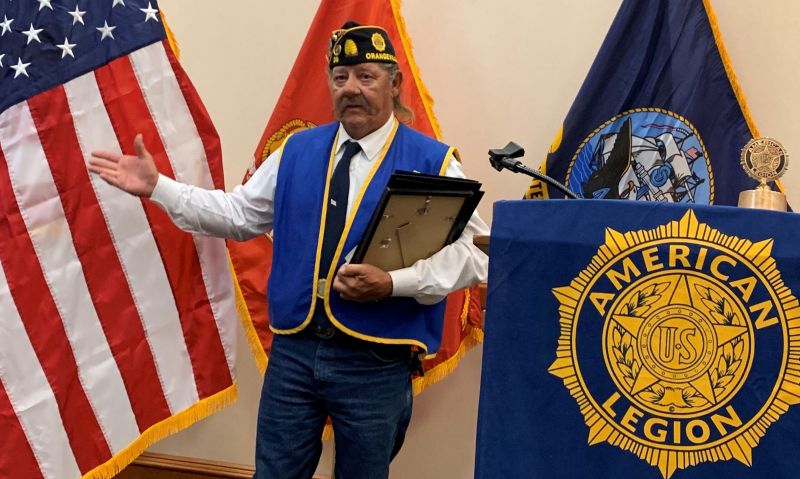 Don Gardner made news headlines in late April when he saved an American flag that had been thrown in the trash can. Gardner, a U.S. Marine veteran and member of American Legion Post 39 in Huntington, Utah, discovered the flag during his garbage pickup route. The resident who accidentally threw the flag out captured Gardner’s patriotic actions on camera and uploaded the video to Facebook, where it went viral.

Gardner has received a lot of media attention since April for saving the American flag. And the accolades continued by the American Legion Department of Utah on June 25 when Gardner and his family, including his mother, two daughters, son-in-laws, nieces and nephews, attended the department’s convention in Price where he received several honors. “I was totally humbled and overwhelmed with everything that took place,” he said.

Gardner was presented with a signed and personalized photo of National Commander Paul E. Dillard, a certificate of appreciation signed by the national commander and National Adjutant Daniel S. Wheeler, a commemorative Legion pin and Marine Corps pin, and a Quilt of Valor with the American flag embroidered on it.

“It overwhelms me of the kindness,” said an emotional Gardner. “I just want to personally thank everyone involved with this. Like I say, I have been truly humbled. Just for being me.”

The final surprise Gardner received was that his daughter Sarah Hayward, an Army veteran, was awarded a membership in The American Legion at his post home. “I have truly been humbled with this experience, and I’m actually proud of it,” Gardner said. “Again, I just want to tell everyone from the national level down from the bottom of my heart, thank you.”

Since the video of him went viral, Gardner has received several American flags that he will retire on the Fourth of July –  including the one he saved from the dumpster – during a flag retirement ceremony outside the home of American Legion Post 39. “It has been truly eye-opening for a lot of people around here,” he said. “The whole thing has just been absolutely 100 percent positive.”