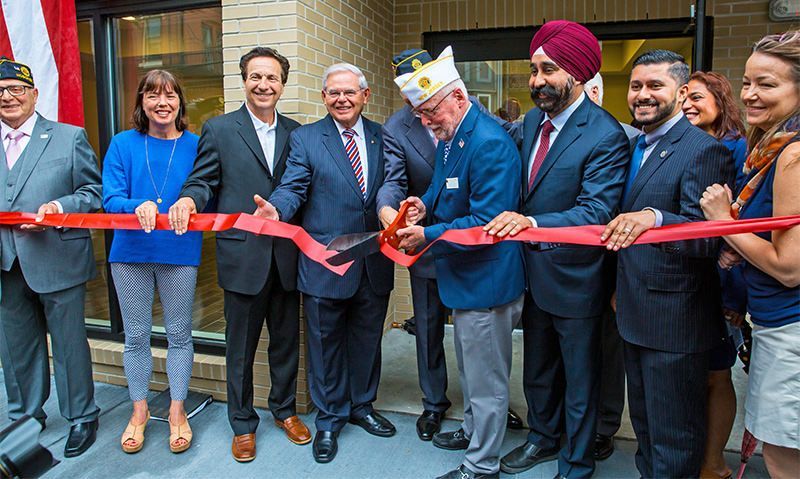 Members of American Legion Post 107 in Hoboken, New Jersey, cut the ribbon on six apartments for homeless veterans the post included in the reconstruction of their post after Superstorm Sandy. Photo by Melanie Metz.

When Superstorm Sandy left parts of American Legion Post 107 in Hoboken, N.J., under more than six feet of water in 2012, the post’s members never doubted they’d somehow find a way to rebuild. But rebuilding turned into much more, starting as a vision and becoming a reality on July 8.

On that day, Tom Kennedy Post 107 members were joined by Legionnaires from all over New Jersey, local and national politicians and members of the community for the ribbon-cutting of what now is a new post home and six apartments for homeless veterans in Hoboken.

Thanks to donations, grants and other forms of support, a $3.2 million facility that houses Post 107’s facilities on the second floor will also include both fully furnished one-bedroom and studio apartments on Floors 3-5 that will house homeless veterans through vouchers provided through The Department of Housing and Urban Development. Each unit features a full kitchen and bathroom, and will be completely furnished.

“I think people appreciate the fact that there shouldn’t be veterans (who are) homeless,” Post 107 Commander John Carey said. “I’m very proud of what we did.”

Carey said that even right after Sandy “there was never a thought that we wouldn’t rebuild.” The problem was figuring out how to do it. Then we heard there was money out there for homeless veterans. Then we said ‘let’s explore that. Let’s take it and run with it.’ We ran it by the (post) members, and all the members were supportive. And we’re here today.”

The money Carey referenced was available through Monarch Housing Associates, a nonprofit that, among other missions, works with consumers, providers and family organizations to develop, manage and operate permanent, affordable and supportive housing for the homeless.

That money, along with more than $1 million raised through other sources, helped make the homeless veteran facility a reality. Helping lead the fundraising effort was Post 107 Finance Officer Mark Villamar, a Vietnam War Army veteran who has a background in development and accounting. Villamar was “the perfect candidate to head up the construction project,” Carey said.

“We’ve been working on this thing every day, month after month, year after year,” Villamar said. “It took a long time and a lot of people put in a lot of effort. Not only was there the construction side, but there’s the financial side of raising the money. We got money from the state, from the county, from cities, from individuals. We had to do all kinds of fundraising efforts to make the budget. And we have.”

The Hoboken Shelter will work with Post 107 to provide supportive services to apartments’ residents, with the goal of eventually moving them to their own housing situations. The shelter also will provide counseling, referrals to appropriate agencies, independent living skills training, employment and job readiness programming and other services.

Veterans will be charged a maximum of 30 percent of their income to live in the units in a city where the average apartment rent is $3,469, according to RentCafe.com. The facility was built with flood mitigation in mind so that a repeat of 2012 won’t happen.

Dozens showed up for the July 8 ribbon-cutting, during which Carey stressed the need to take care of those who choose to join the military once they return home.

“More than two dozen homeless veterans can be found here in Hoboken, searching for a place in the bitter winter or the driving rain. There will be six less homeless veterans on the benches of Hoboken,” Carey said. “Veterans have given us freedom, security and the greatest nation on earth. The least we can do is give them a roof over their heads. These men and women served our country and shouldn’t be on the streets. We have an obligation to take care of our veterans. It’s the least we can do.”

Carey took time to praise his post’s namesake, Marine veteran, longtime police officer and former Hoboken Director of Public Safety Tom Kennedy. “Tom was the glue that held this post together during the difficult years in Hoboken’s history,” he said. “I know Tom would be proud of the accomplishments the post has made in developing these six housing units for our homeless brothers and sisters.”

Carey also praised former Hoboken Mayor Dawn Zimmer for her support, as well as representatives from Monarch Housing, the Hoboken Rotary and others. He also thanked Richard Turner, for 29 years the mayor of nearby Weehawken, for a $200,000 grant toward the project.

Hoboken Mayor Ravi Bhalla was praised by Carey for his cooperation with the project – “We were able to save thousands of dollars because of his commitment to this project” – and for Hoboken officials involved with the project.

Bhalla said making the post’s vision a possibility happened because of cooperation. “The grand opening of The American Legion is the perfect example of what can happen when various levels of government really work together in partnership for a common and a noble cause,” he said. “I couldn’t think of a more noble cause than supporting our veterans. This was truly a partnership at all levels of government.”

Bhalla said that what Post 107 was able to accomplish working with the government and other entities “will be a model for the rest of the state, and even the country, of a successful partnership (between) The American Legion with various public and private partners. And it is my hope that this will successfully be replicated across New Jersey.”

Also in attendance was U.S. Sen. Bob Menendez, who lives less than 20 miles from Hoboken. “The completion of this new (post) … is yet another milestone for Post 107’s storied history,” he said. “It’s going to make a difference in the lives of veterans.”

American Legion National Vice Commander Paul Spedaliere praised Post 107 for taking a different approach after Sandy struck. “Instead of rebuilding as a traditional post … the members came together to rebuild a post that not only benefits their membership, but helps a growing homeless veterans population in the inner city of Hoboken,” he said. “A line in our Preamble says ‘To inculcate a sense of individual obligation to the community, state and nation.’ It stands true today, as posts like 107 here in Hoboken begin their journeys into the Legion’s second century. May they inspire a new vision that is … built to serve Americans yet to come.”

New Jersey National Executive Committeeman Chuck Robbins said what Post 107 has accomplished “is all about what we do in our communities, our state and nation – and, most importantly, for our veterans.” And Past Department Commander Raymond Miller – who during his 2018-2019 tenure leading the state allocated $25,000 from his commander’s special project to Post 107’s mission – made it a point to praise Carey and his team for their efforts.

“These gentleman … raised over $3.2 million,” Miller said. “You’ve done one heck of a job, and you should be proud of yourself because I know the Department of New Jersey is.”

Department of New Jersey Commander Robert Newell said Post 107’s accomplishment has made an impact beyond just helping the homeless. “They’re bring in so many new folks into this post. It’s being rejuvenated,” he said. “That’s what we need to continue to do: Get people into the posts and let them see what we’re actually doing. This is one of the prime examples.”

Villamar said he hopes what Post 107 has accomplished can be duplicated across the country. “This is a template for how other American Legion posts can expand their mission to take of care of veteran and veteran families,” he said. "We have the unique advantage of having the experience of being in combat … so that we understand the pressures and stress that these soldiers have gone through. Generally, the homeless veteran does not like to associate with the general non-veteran homeless community – primarily because they don’t feel comfortable. They don’t want to be included in that group of people. I like to think that … our members will be extraordinarily helpful in getting the residents in this building on their feet and be productive members of society.”

Carey said the 99-year-old post’s next step is securing similar vouchers for the additional homeless veterans apartments the post hopes to add on to its current building – which Carey said was built with the idea of expansion to its right in mind. The goal, Carey said, is to add 18 additional units to the facility – an idea that already is garnering support. During his remarks, Menendez said, “As the senior Democrat on the (Senate Subcommittee on Housing, Transportation, and Community Development), I’m ready to support you in Round 2 so we can create more housing.”

Post 107 also received similar words of support from Hudson County Freeholder Anthony Romano Jr., whose county provided an $800,000 grant to building the six new apartments. “We vow … that we will work with Sen. Menendez to continue to get Phase 2 completed. This is not the end. This is the beginning.”