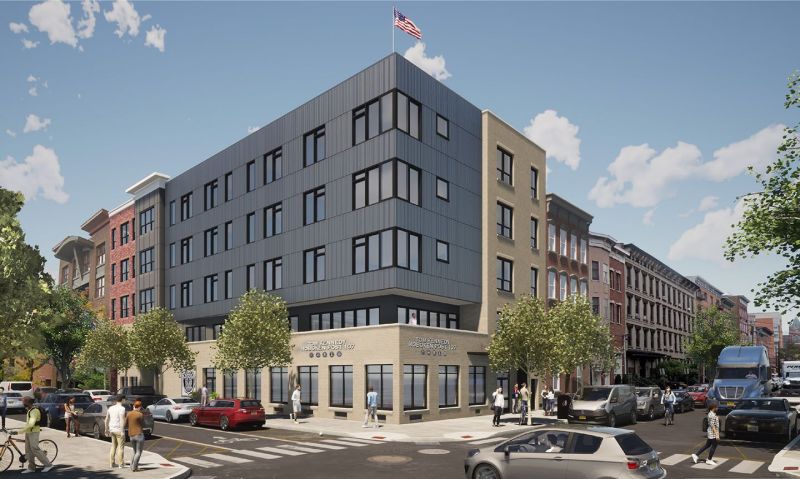 American Legion Post 107 in Hoboken, N.J., didn’t close up shop when Superstorm Sandy left the post’s facility under more than six feet of water in 2012. Rather, the post membership saw an opportunity to both rebuild and assist homeless veterans in Hudson County.

Opportunity became reality in July 2019 when the post – since renamed Tom Kennedy Post 107 – cut the ribbon on a new post home that included six fully furnished apartments for homeless veterans in Hoboken. Since then, Post 107 Commander John Carey said the apartments have stayed at maximum occupancy, helping veterans who had been on the streets for years to find a place to call home.

Now, Post 107 is looking at an even bigger endeavor: expanding its Veterans Center of Hoboken to 18 more apartments, a meeting and recreation space, and community event space to be built on an adjacent lot the post now owns.

That effort recently received a boost in the form of a $100,000 matching grant from Rock and Roll Hall of Famer Jon Bon Jovi through his JBJ Soul Foundation. Bon Jovi’s foundation uses grants to help combat hunger, poverty and homelessness. Its efforts provide support to more than 700 units of affordable and supportive housing in 11 states for youths and veterans.

Via press release, Bon Jovi said his foundation and Post 107’s effort share common ground. “JBJ Soul Foundation is dedicated to continuing our work with veterans, addressing issues of hunger and homelessness, and we are all inspired by the Veterans Center of Hoboken,” Bon Jovi said. “The Center is not only expanding with 18 additional furnished housing units, but is also providing services including physical and mental health care and employment opportunities for these struggling veterans. This is exactly the kind of mission and positive impact the Foundation is proud to support.”

Post 107 Commander John Carey called the $100,000 grant a “welcome” gift as the post continues to fundraise for the additional apartments. He said the post applied for the grant and was “invited to make a pitch.”

What Post 107 already had accomplished with the original six apartments was a selling point, Carey said. “I think that had a lot to do with it,” he said. “They saw what we did on the first phase.”

Veterans living in the Veterans Center of Hoboken can do so indefinitely and are charged a maximum of 30 percent of their income to live in the units in a city where the average apartment rent is $3,374, according to RentCafe.com. They also have access to counseling, employment and job readiness programing and other services.

“Our tenants have been great. We got this one guy a job with the city recently,” Carey said. “We’ve had no problems. It’s been a labor of love. We had one guy, he’d been on the streets for nine years. He cried and said ‘I prayed I wouldn’t be on the street another year.’ It’s been terrific, and we’ve gotten great support from the community.”

Seeing the vision become reality and its impact on fellow veterans “has been a very rewarding experience,” Carey said. “When you see the expressions on the guys’ faces, it can’t do enough for you. One guy said ‘I felt like I hit the Lotto when I got in here.’”