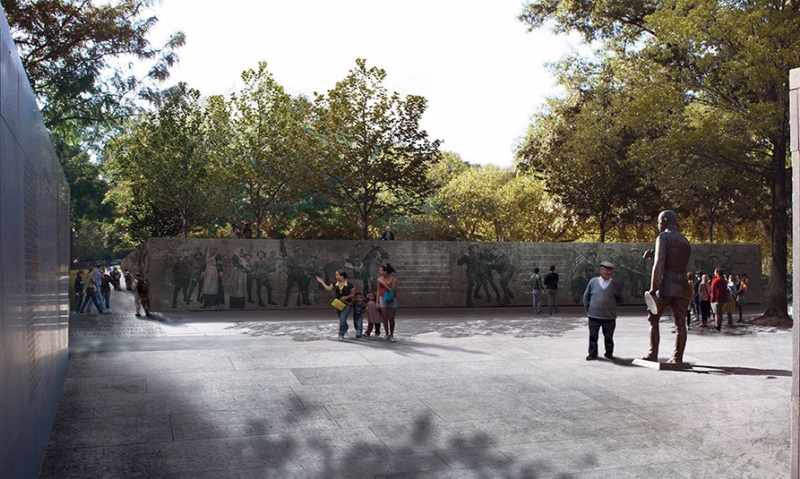 A young Chicago architect has won the design competition for a national World War I memorial in Washington, D.C., with his vision of a green space elevated by images and words of the Americans who served.

Announced Tuesday, Joe Weishaar’s plan to transform the urban Pershing Park, a 1.8-acre site a block from the White House on Pennsylvania Avenue, will preserve a 1983 statue of its namesake general. Otherwise, the memorial will more resemble its counterparts on the National Mall, replacing the current plaza and gardens with trees, a bronze sculpture, and a raised lawn atop walls featuring bas-reliefs of doughboys and quotations from soldiers, generals and politicians.

“Those 5 million Americans who served in uniform during World War I literally changed the world,” said Robert Dalessandro, chairman of the U.S. World War I Centennial Commission, which sponsored the design contest. “This new landmark in our nation’s capital will be a worthy expression of their great legacy.”

More than 350 entries came in from around the world, and in September the commission named five finalists. Weishaar, 25, drafted “The Weight of Sacrifice” as an intern, selecting New York sculptor Sabin Howard for the artwork. The commission approved the plan with an 8-1 vote, after an independent panel of experts unanimously selected it as the best. Weishaar’s team includes Baltimore architectural firm GWWO Inc., landscape architect Phoebe Lickwar, and engineering consultants Henry Adams LLC, Keast & Hood and VHB.

The raised memorial will be 116,516 cubic feet – one for every American who died in World War I, which ravaged Europe from 1914 to 1918. The United States entered the war in April 1917, mobilizing millions of citizens.

That shift will be depicted in a “Wall of Remembrance” relief sculpture of 23 figures who “transform from civilians into battered soldiers, leading one another into the fray,” according to Weishaar’s design concept. The wall’s central piece, “Brothers in Arms,” portrays brotherhood and healing as a wounded soldier is lifted up by his comrades.

Visitors will read of horrors and heroism in a series of quotations that weave a narrative of the “war to end all wars.” On the upper plaza, a sculpture titled “Wheels of Humanity” will represent soldiers’ bond to each other and the machinery they command.

Weishaar assigns special meaning to the memorial’s raised lawn. The walls beneath and surrounding it express the costs of war, with the open park area itself symbolizing the purchase of freedom.

“The integration of a park around and atop the memorial alludes to the idea that public space and personal freedom are only available through the sacrifice of our soldiers,” Weishaar writes.

“The commission did a wonderful job in its approach to the design and the design contest,” Davis said. “It was so professional. I am impressed by all the work it did to get to this point.”

He praised Weishaar’s simplistic design approach, and his efforts to maintain a park atmosphere. While the national World War II, Korean War and Vietnam War memorials were erected while many of their veterans were alive to see them, the World War I memorial at Pershing Park will be a teaching and learning experience for generations to come, he says.

“We should all be very excited about it, as it goes hand in hand with the Legion’s 100th anniversary celebration,” Davis added. “Our organization was born in the days following World War I. It is so much a part of who we are, and very timely and very fitting for what we as an organization are doing. This goes back to our roots.”

Whitfield said he's pleased with the commission's selection and thinks the public will be, too.

"This memorial will not only commemorate the sacrifice of those who served in World War I, it will be a lovely park within an urban area," he said. "It accomplishes both purposes. The design complements the location, and being so close to the White House, it will get lots of foot traffic."

Also at the unveiling was Sandra Pershing, granddaughter-in-law of Gen. John “Blackjack” Pershing, commander of the American Expeditionary Forces in Europe.

The estimated cost of the memorial is $30 million to $35 million, which will come entirely from private donations. The goal for beginning construction is November 2017, with a dedication on the 100th anniversary of Armistice Day, Nov. 11, 2018.

Last October, the Legion’s National Executive Committee passed Resolution 13, which supports construction of a national World War I memorial at Pershing Park, without any financial obligation on the organization’s part. After reviewing the design, the Legion will determine if it will engage in fundraising or just develop awareness and the means for individual donations to the memorial.

Years ago, there was talk of making the District of Columbia World War I Memorial a national memorial, and the Legion went to Congress in 2006 seeking $7 million in authorized funds to refurbish it. But with the Great War’s centennial in sight, the drumbeat increased to have a national memorial on the Mall.

That was the commission’s first pick for a location; however, it ran up against a law intended to limit new construction there. The decision was made to create a memorial at Pershing Park, but even with a design plan chosen, it faces the regulatory hurdles of various local and federal bodies, including the National Park Service, the Commission of Fine Arts, the D.C. Office of Historic Preservation and the National Capital Planning Commission.