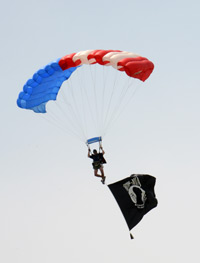 The American Legion is committed to achieving a full accounting of all POW/MIAs from the Gulf War, Vietnam War, Cold War, Korean War and World War II. This means returning living POWs, the repatriation of their remains, or finding convincing evidence why neither of these is possible.

The American Legion supports the continued declassification of all POW/MIA information, the strengthening of joint commissions with Russia, North Korea and China, and adequate resourcing of investigative efforts and field operations to resolve POW/MIA issues. The American Legion has also worked continuously with both Congress and DoD to improve the policies and programs for the accountability of missing persons. This includes urging the president and Congress to fully fund the Defense POW/MIA Accounting Office (DPMO) for its current and future mission of ensuring the accountability of U.S. servicemembers. The American Legion will continue to speak out and exert maximum pressure on both the administration and on Congress to fully account for America's POW/MIAs.

For years, The American Legion supported a National POW/MIA Recognition Day, which is now recognized annually on the third Friday of September. This commemoration is set aside to honor the commitment and sacrifices made by this nation's prisoners of war and those who are still missing in action, as well as their families.

Until July 18, 1979, no commemoration was held to honor POW/MIAs. In the first year, Congress passed resolutions and the national ceremony was held at the National Cathedral in Washington. The 1st Tactical Squadron from Langley Air Force Base in Virginia flew the Missing Man formation. A poster was published by VA which contained only the letters POW/MIA. That continued until 1982, when a black and white drawing of a POW in captivity was used to show urgency of the situation.

Every year, National POW/MIA Recognition Day legislation was introduced until 1985, when Congress determined that commemorative days would no longer be considered. The president now signs a proclamation each year.

The National League of Families proposed the third Friday of September as a commemoration date. Most of the National POW/MIA Recognition Day ceremonies have taken place at the Pentagon. Now, they're held throughout the nation and around the world on military installations, ships, schools, churches, etc. The focus is to ensure that America remembers its responsibility to stand behind those who serve it and to make sure that we do all that is possible to account for those who have not returned.

Resolution 288, adopted at the 67th American Legion National Convention, calls for designating a POW/MIA Empty Chair at all official meetings of The American Legion as a physical symbol of the thousands of American POW/MIAs still unaccounted for from all wars and conflicts involving the United States.