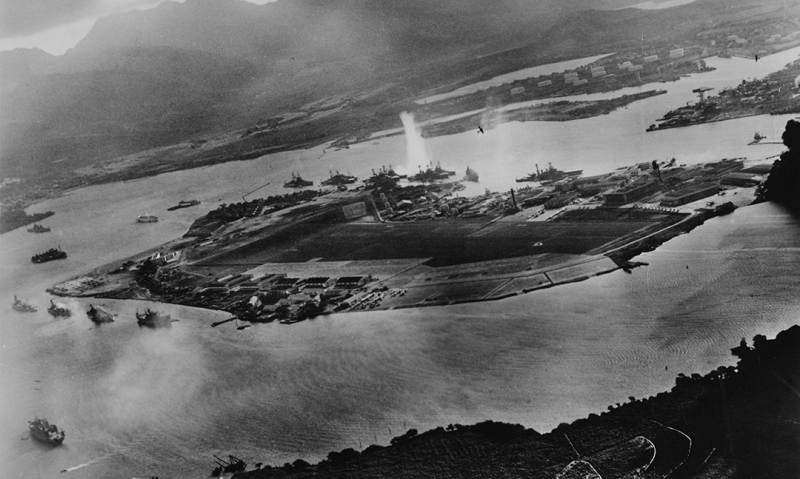 President-Elect Trump has promised to rebuild our military so it can have the resources to better defend the United States. The American Legion supports all efforts that would strengthen our Armed Forces and we look to December 7th as a perfect example of why our nation must always be prepared.

Seventy-five years later most of the witnesses are no longer with us but the legacy of the men and women who defended Pearl Harbor on the day of infamy will always remain. It was a day that defined America and changed the world.

Service, sacrifice and valor were demonstrated by American heroes at unprecedented levels and foreshadowed the trials, toughness and grit that epitomized the Greatest Generation during the Second World War.

Those who did not perish during the attack were not just veterans of battle. They were survivors of an unprovoked and unexpected massive killing spree.

Men like Sterling Cale, who would later serve his country in Korea and Vietnam after surviving numerous battles in the Pacific War. A 20-year-old pharmacist mate assigned to the U.S. Naval Hospital Pearl Harbor on Dec. 7, 1941, Cale attended last year’s American Legion Department of Hawaii observances of the attack.

Nearly three-quarters of a century later, he still recalled the charred bodies and ash that he recovered when he was put in charge of a burial party tasked with removing bodies from the USS Arizona.

“All black ash. One corpse didn’t have a head,” he said. These are the types of memories that continue to haunt even a battle-hardened veteran that would later serve as a Navy corpsman with the 1st Marine Division at Guadalcanal.

Fellow survivor Bob Addobati founded the Pearl Harbor Survivors Association chapter in Sacramento, Calif. But it is December 6, 1941 that Addobati often remembered when he recalled the date of infamy.

“There was a battle of the band contest in Chinatown that night,” he said in 2015. “All the ships had different bands. I spoke to several sailors from the USS Arizona’s band. Eight hours later every sailor in that band was dead.”

Like so many other survivors of Pearl Harbor, the attack was not the end for Mr. Addobati. It was the beginning for the 19-year-old signalman on the USS Solace. He would later lose his leg after his ship was torpedoed at the Admiralty Islands. He would raise a family, retire from the U.S. Postal Service and survive until January 15th of this year when, at the age of 93, he would reunite with his Fallen but never forgotten comrades.

So many are gone now. The more than 2,400 men, women and children who died from the attack would be joined by thousands of others in the seven and a half decades since. As those able to provide firsthand accounts leave the ranks of the living, it is up to us to keep their legacies alive.

Fifteen Medals of Honor were awarded as a result of the attack. 51 Navy Crosses. 53 Silver Stars. Thousands of other acts of heroism were not recognized with medals because documenting the acts was not the priority. Saving others and fighting another day in order to defeat those who brought the war became job one.

Sixty years after the attack on Pearl Harbor, America was caught off guard once again. September 11, 2001 was another date that will live in infamy to a new generation of Americans.

It would mark the beginning of another painful war – one against global terrorists that continues to this day. And while military members of the Greatest Generation took incredible risks to save their comrades, we saw similar courage from police officers, firefighters and first responders who entered burning buildings when logic and instinct would compel lesser people to move in the other direction.

Many of the 9/11 heroes were veterans. Nearly all were taught about the Pearl Harbor attack in history class. There was something very American about their response.

Just as the Pearl Harbor heroes were likely inspired by the doughboys of World War I, the valor that we continue to witness among today’s military is at least partially the result of young men and women who want to live up to the legacies of those who preceded them.

Fearlessness is also the legacy of Pearl Harbor survivor Jack Evans. A 17-year-old lookout on the USS Tennessee during the attack, his memory of that day was that, “Everything was on fire. Death and destruction everywhere.” Yet the California native recently told The American Legion Magazine that he and his crewmates were not frightened.

“Most people just set their jawline and went about doing their jobs,” he said. “There were very few who went into hysterics or anything of that nature. I really wasn’t scared. It was so frustrating to be in a situation where there is so little you can do. You want to fight those guys and there was no way to do it.”

Thankfully, they found a way. For Pearl Harbor is also the story of a remarkable comeback. The Japanese thought they would strike an early and crippling blow to America’s Naval and Air capabilities. They failed.

Despite the advantage of surprise exploited by the Japanese planes and submarines, the feisty Americans at Pearl Harbor still destroyed 29 enemy aircraft, damaged 29 others and sunk or beached 5 mini-subs.

Six American battleships that were sunk or damaged during the attack, were restored, refloated and returned to service. Survivors who were physically able to continue their service, fought on for the duration of the war or until wounded or killed.