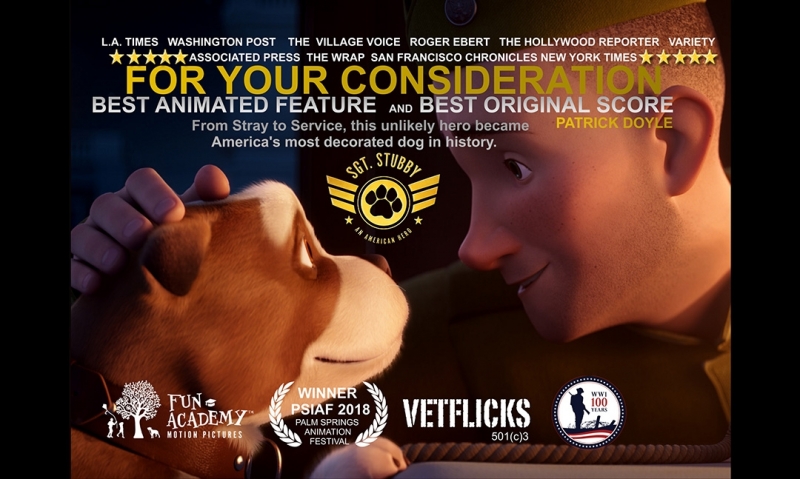 A "For Your Consideration" ad for "Sgt. Stubby: An American Hero." (Image via Fun Academy)

Even during his lifetime, the real Sgt. Stubby was recognized as the nation's most decorated canine hero after serving with distinction on the front lines of World War I. A century later, an animated family film based on his exploits continues that tradition as Fun Academy Motion Pictures’ “Sgt. Stubby: An American Hero” has been named an official selection of over 43 film festivals internationally – including 23 award wins to date – while also qualifying for the Best Animated Feature category for consideration for the 91st Academy Awards.

The film depicts the story of the unbreakable bond between a young soldier and a stray dog on the brink of America’s entry into World War I. For his valorous feats, Stubby is still recognized today as the first dog promoted to the rank of sergeant in the U.S. Army and the most decorated dog in American history. He is also widely considered the forerunner to the Army’s working dog program. The delightful animated film shows the world that the greatest heroes can come from the unlikeliest places.

“It’s a beautiful, heartwarming story centered on two soldiers – one of whom walks on four legs – who keep each other safe and keep each other alive,” says writer-director Richard Lanni. “This film is a great way to engage kids with history, and we are thrilled to see audiences around the world share our love for this little dog and his great mission of opening new eyes to our shared past.”

For its age-appropriate depiction of history and highlighting of the human-animal bond, “Sgt. Stubby” has been officially endorsed by over 90 educational institutions and animal advocacy nonprofits, including the Humane Society of the United States, the Armed Services YMCA, the Westminster Kennel Club, the Connecticut State Library and the United States World War I Centennial Commission.

Following the war, Stubby marched in multiple American Legion national convention parades, including the inaugural one in 1919 in Minneapolis. He was an official member of Eddy-Glover Post 6 in Connecticut, the only known canine to ever become an official member of the Legion. Producer/distributor Fun Academy conducted a screening campaign at Legion posts earlier this year in association with the 501(c)(3) nonprofit Vetflicks, and Vetflicks national director Shari Hamrick says the screeenings will continue through the Legion's centennial year of 2019.

“We have successfully assisted many posts to set up special events, secure screening permissions and promote these amazing events for themselves and their communities," Hamrick says. "What better way to involve the youth of our country with not only celebrating true history, but having fun learning and being entertained? We 100 percent support Fun Academy and their amazing film, which made the Academy Awards shortlist and a Variety Magazine listing as a contender for Oscar gold."

Plans for a DVD release are also in the works. The movie's website is www.StubbyMovie.com.