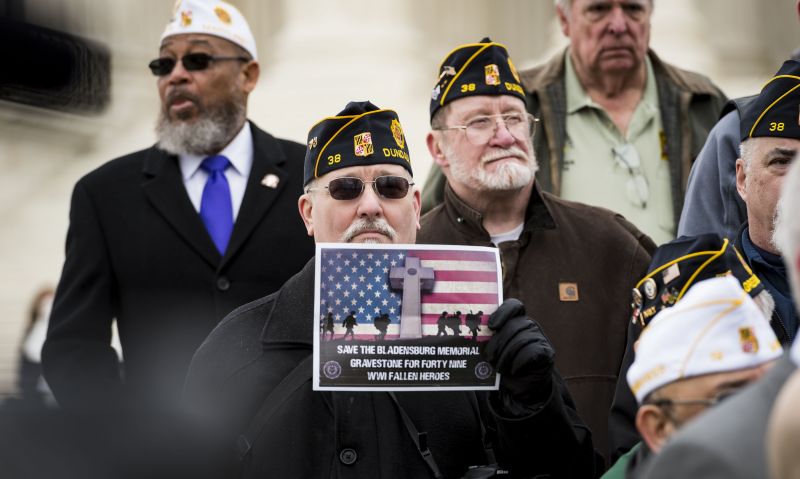 In a landmark victory for The American Legion, the U.S. Supreme Court ruled 7-2 on June 20 that the 40-foot memorial can remain on public land in Prince George’s County, Md., where it has stood since 1925.

“This was not just about a single cross,” American Legion National Commander Brett Reistad said. “This was about the right of a community to honor its fallen heroes. And that’s why the World War I veterans of Bladensburg sacrificed their lives, to protect the freedom of others.”

In 1925, The American Legion and Gold Star Mothers erected the memorial as a tribute to 49 Prince George’s County veterans who died during World War I. The cross shape was selected by the Gold Star Mothers to represent their sons’ resting place in Europe.

For decades, the memorial stood peacefully until the American Humanist Association (AHA) filed suit, claiming the memorial violated the First Amendment. The Bladensburg memorial was funded privately and the property where it stands was in private hands when it was erected. However, now it sits on land owned by the Maryland-National Capital Park and Planning Commission, a governmental agency.

“The American Legion does not consider these crosses which honor so many veterans to be religious memorials,” Reistad explained. “But even if it were, freedom of religion is also a cherished right protected by our First Amendment. Americans can feel more confident today that veterans memorials, cemetery headstones and patriotic monuments throughout our country are safer as a result of this ruling.”

The American Legion was represented at the Supreme Court by the legal teams at First Liberty Institute and Jones Day. Aligning with them was the state of Maryland, which owns and maintains the memorial.

“This is a landmark victory for religious freedom,” said Kelly Shackelford, the president, CEO and chief counsel to First Liberty. “The days of illegitimately weaponizing the Establishment Clause and attacking religious symbols in public are over. Our founders would have been appalled at this attempt to make the government hostile to our religious heritage, history and symbols. The attempted perversion of our Constitution is now over, and every American now has more freedom than they have had in decades, with a government no longer hostile to people or expressions of faith.”

Michal Carvin, lead counsel for The American Legion, partner at Jones Day and First Liberty network attorney, said, “We are grateful for this historic victory for the First Amendment. This decision simply affirms the historical understanding of the First Amendment that allows government to acknowledge the value and importance of religion.”

“The cross is undoubtedly a Christian symbol, but that fact should not blind us to everything else that the Bladensburg Cross has come to represent,” he wrote. “For some, that monument is a symbolic resting place for ancestors who never returned home. For others, it is a place for the community to gather and honor all veterans and their sacrifices for our nation. For others still, it is a historical landmark. For many of these people, destroying or defacing the cross that has stood undisturbed for nearly a century would not be neutral and would not further the ideals of respect and tolerance embodied in the First Amendment.”

The ruling was cheered by Amber Longoria, a post-9/11 Navy veteran who is a member of American Legion Post 5208 in Denver. “We have bigger fish to fry than where a monument is located,” she said. “This shouldn’t have been an issue to begin with.”

The Supreme Court victory means that Legionnaires from that area can continue to hold Memorial Day and Veterans ceremonies at the site. In November, Phillip Holdcraft, past commander of Post 131 in Colmar Manor, Md., will be there, along with a strong contingent of Legionnaires from the Department of Maryland.